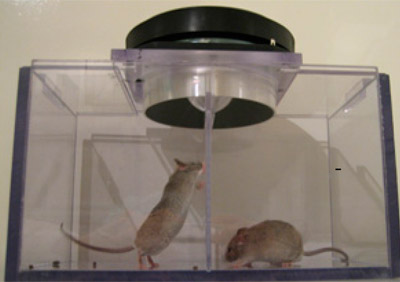 Researchers have added two new candidates to the collection of compounds that alleviate both the behavioral and molecular hallmarks of fragile X syndrome in mice that model the disorder. A third candidate, minocycline, improves some symptoms in children with the disorder.

The three compounds are part of a growing chemical arsenal being tested against fragile X syndrome. Many researchers say it’s time to start testing these drugs in combination to determine whether drugs targeting different mechanisms can work together.

“It’s good to have multiple targets because an individual’s response to different drugs can vary based on their genetic background,” says Susumu Tonegawa, professor of biology and neuroscience at the Massachusetts Institute of Technology in Cambridge, Massachusetts.

In a study published 2 April in Proceedings of the National Academy of Sciences, Tonegawa and his collaborators identified a compound called FRAX486 that normalizes dendritic spines — small neuronal protrusions that form the basis for connections, or synapses — in the brains of mice lacking the fragile X protein, FMRP1.

A number of studies have found that mice and humans lacking the protein both have a profusion of immature spines, which is now considered a hallmark of the syndrome.

A second mouse study, published 31 March in Nature Medicine, showed that a drug called rimonabant improves various symptoms of the disorder in mice2. The drug targets the brain’s endocannabinoid system, signaling molecules in the brain that influence mood, memory and sensitivity to pain.

Rimonabant has been used to treat obesity in people, but is no longer approved for use in Europe or the U.S. because of safety concerns.

“They are both quite exciting from the point of view of fragile X syndrome,” says Bradley Alger, professor of physiology at the University of Maryland School of Medicine, who was not involved in any of the new studies. “They are encouraging in that they provide a rationale for potential treatments.”

The findings are particularly impressive because the drugs are able to reverse fragile X symptoms in adult mice, adds Olivier Manzoni, research director at INSERM in Marseille, France, who was not involved in any of the studies. “By that time, you might think things aren’t as susceptible to change, but they are.”

In a third study, a clinical trial of 55 children with fragile X syndrome, Randi Hagerman and her collaborators at the University of California, Davis, showed that minocycline can improve parent-reported measures of anxiety. Each child took either the drug or a placebo for three months and then switched, and neither clinicians nor families knew which was which.

Children showed a small but significant improvement on a test called the Clinical Global Impression scale, in which doctors and parents give an overall rating of the child when taking the drug compared with placebo. The drug does not improve language or social function, according to the study, which was published 8 April in the Journal of Developmental and Behavioral Pediatrics3.

The researchers say some children respond to the drug better than others, and they are looking for biomarkers that might predict who will respond.

Mice lacking FMRP show many symptoms of the syndrome, including seizures, social deficits and a high density of dendritic spines. The animals have also provided molecular insights into the disorder — they show overactive protein synthesis at the synapse and alterations in neuronal plasticity, the cells’ ability to adjust the strength of their connections.

Much of the research into fragile X treatments has focused on the metabotropic glutamate receptors (mGluRs), which are overactive in people with the syndrome. A number of pharmaceutical companies are developing compounds that directly or indirectly dampen this pathway, some of which are in clinical trials.

Tonegawa’s team took a different approach, looking specifically for compounds that regulate dendritic spines. These structures change shape in response to neural activity, a form of structural plasticity that is regulated by an enzyme called PAK.

The researchers showed in 2007 that eliminating the enzyme in mice decreases the number of spines, the opposite of what’s seen in fragile X syndrome. They also found that crossing animals lacking normal PAK with those lacking FMRP produces animals with a normal number of spines4. Mice lacking both proteins also have fewer seizures and are less hyperactive than fragile X mice.

“We started with a very basic interest in spine growth and regulation, and it led to this accidental finding,” says Tonegawa.

The researchers then began searching for compounds that would serve the same function, chemically inhibiting PAK. A single injection of FRAX486 lowers the fragile X mice’s susceptibility to sound-induced seizures, improves hyperactivity and repetitive behaviors, and normalizes dendritic spines and synaptic plasticity.

Tonegawa says that Afraxis, a California-based start-up, will do the additional testing needed before PAK inhibitors can be tested in people with fragile X syndrome.

Like FRAX486, rimonabant reduces seizures and normalizes the number and shape of dendritic spines. It also improves some measures of memory, and restores the mice’s response to pain. (Both people and mice lacking FMRP are highly tolerant of pain.)

About five years ago, rimonabant enjoyed a brief popularity inEurope as a weight-loss treatment but waspulled from the market in January 2009 because it increased suicidal thoughts in a subset of users. It is thought to be otherwise safe, and lower doses may not carry the suicide risk.

Andrés Ozaita and his collaborators found that combining low doses of rimonabant and an mGluR drug called MPEP improves symptoms more than either drug alone.

Exactly how rimonabant does this is still a mystery. The drug targets the endocannabinoid system, which is tied to mGluR receptors: Activating mGluR5 triggers the production of endocannabinoids, which in turn dampen neural signaling.

“Endocannabinoids act like a break on neural activity,” says Ozaita, associate professor of physiology at the Universitat Pompeu Fabra in Barcelona.

The new findings conflict somewhat with those from a previous study, which found that turning up the endocannabinoid system in fragile X mice improves symptoms6. The reasons for the discrepancy are not yet clear.

Researchers say that it can be difficult to compare the results of different fragile X studies because they employ different measures of behavior, look at different parts of the brain in mice of different ages, and sometimes use different strains of mice.

“This is something that should be homogenized,” says Manzoni. “It would give the community a better sense of how various drugs affect each parameter.”