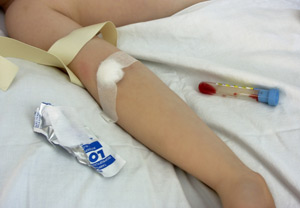 Gene expression changes measured in blood may help differentiate children with autism from those without the disorder, according to two studies published in the past few months.

The studies — one of which is the largest of its type to date — bolster ongoing efforts to identify blood-based biomarkers for autism, though a clinical test is still a long way away, researchers say.

The first study examined gene expression in blood taken either from boys diagnosed with autism or from controls, all aged 3 to 6 years. The second study looked at children younger than 24 months – when parents or doctors might suspect that a child has autism, but before a definitive diagnosis can be made.

Both papers speak to the potential for developing diagnostic screens based on gene expression in peripheral tissues such as blood, says Valerie Hu, professor of biochemistry and molecular biology at George Washington University in Washington, D.C., who was not involved in the research.

The reasons for this dissimilarity aren’t yet clear, though it may reflect differences in the groups analyzed in each study. The discrepancy also highlights the challenge of identifying reliable biomarkers for autism.

Studies in postmortem brain samples and in cultured blood cells have identified changes in gene expression that seem to represent signatures for autism. But it’s impossible to directly analyze brain tissue in children, and cultured cells can behave unpredictably. Blood samples, on the other hand, are easy to collect and genetically stable.

Both of the new studies used microarrays to measure differences in gene expression across tens of thousands of genes. In one of them, published 5 December in PLoS ONE, Louis Kunkel and Isaac Kohane at Children’s Hospital Boston compared gene expression in blood in 99 boys1. They identified 489 genes whose expression is different in the 66 boys diagnosed with autism than in 33 typically developing boys.

The researchers then narrowed down the list to a panel of 55 genes that are most predictive of each boy’s autism status.

A panel with too many genes would limit the test’s ability to generalize beyond the group of children from which it was developed, because it would inadvertently reflect specific features of that group. Too few would make the test inaccurate. So the researchers used an algorithm that balances these factors.

They tested their panel in a second set of participants: 104 boys and girls with autism and 82 controls. Their panel correctly identified children with autism with an accuracy of 73 percent. The study did not look at the panel’s specificity, its ability to distinguish autism from other developmental disorders.

In the second study, published in September in the Journal of the American Academy of Child and Adolescent Psychiatry, Eric Courchesne and his colleaguesidentified 154 genes whose expression strongly differs between 30 boys and girls later diagnosed with autism and 34 typically developing children2.

The researchers used statistical models to whittle the list down to 48 genes, then tested the panel in a different set of 30 children with autism and 34 controls. Their panel accurately identified autism with an accuracy of 87 percent, but once again, the researchers did not assess its specificity.

Although the gene sets identified in the two studies differ, they tend to belong to the same key pathways, such as those involved in learning and memory, says Kohane, professor of pediatrics, health sciences and technology at Children’s Hospital Boston. Genes in some of these same pathways have been fingered in other studies of autism.

Both teams note that the numbers in their studies, and for such work overall, are too low. “Even with hundreds [of participants], we are still talking small datasets,” says Kunkel. That might in part explain the lack of overlap in the studies.

There may also be other differences, says Kunkel. For one, his study began with data only from boys, and as a result the panel fared much worse with girls, with an accuracy of just 51 percent.

Also, 92 percent of the boys with autism in Kunkel’s study, but only 40 percent of controls, are Caucasian, notes Daniel Geschwind, professor of neurology and psychiatry at the University of California, Los Angeles. “We know gene expression will depend a lot on ethnicity,” Geschwind says.

Parsing the autism cases into subgroups based on genetic background might also help identify a stronger signal, Geschwind adds.

To be clinically useful, a test like this would need to differentiate autism from other neurodevelopmental disorders.

SynapDx, a company based in Southborough, Massachusetts, plans to launch a multicenter study of 600 children with autism that will assess the specificity of Kunkel’s panel. The other team is also extending its study to children with other developmental disorders.

Still, blood-based gene expression alone is unlikely to be accurate and specific enough for early autism diagnosis, and will need to be combined with genetic, imaging and other information, researchers say. “Ultimately,” says Kohane, “a high-reliability test that [has] 90 percent or greater specificity is going to require many modalities.”

Correction: This article has been modified from the original. An earlier version reported that both studies analyzed blood from children younger than 24 months, when in fact the PLoS ONE study focused on children ages 3 to 6 years old.