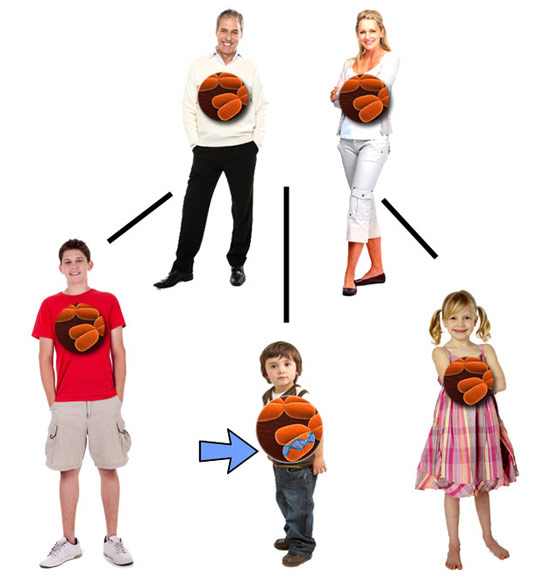 Family tree: Rare mutations are much more common among individuals with autism than in their parents or unaffected siblings.

Three new studies analyzing genetic data from families in which just one child has autism have found the strongest evidence yet that rare new mutations contribute to the disorder. The reports appear today in Neuron1,2,3.

The studies use powerful new screening tools to scan for genetic anomalies in affected children, their parents and siblings. They are the largest genetic studies of so-called ‘simplex’ families to date, covering approximately 4,000 individuals from more than 1,000 families.

Researchers searched for both rare de novo mutations, which occur spontaneously in the individual, as well as rare variants passed down from parents to child. For a variant to be defined as rare, it must appear in less than one percent of the population. Common variants, by contrast, are present in five percent or more of the general population.

In 2007, Michael Wigler and his colleagues at Cold Spring Harbor Laboratory in New York reported that children with autism carry more de novo copy number variations (CNVs) than their siblings do4. CNVs are deletions and duplications in stretches of DNA. The de novo mutation rate among affected children in simplex families in that study was ten percent, compared with one percent in controls.

In the third study, a team headed by computational biologist Dennis Vitkup performed a network analysis of the genes identified in Wigler’s study. A significant proportion of genes in the identified CNVs are associated with a network involved in the formation of synapses, the junctions between neurons, the researchers found.

“The studies are well-done and very much needed,” says Stephen Scherer, director of the Center for Applied Genomics at the Hospital for Sick Children in Toronto, who was not involved with the work. “The most important finding is the validation of the de novo rate.”

Wigler’s and State’s teams both found that de novo CNVs in the affected individuals are larger than those in their siblings, and cover more genes. The studies pinpointed several known autism-related regions, including 16p11.2, 7q11.23 and 15q13.2-q13.3.

The 7q11.23 region is associated with both autism and Williams syndrome, which is characterized by hyper-social behavior combined with intellectual disability. This large stretch of chromosome 7, encompassing 25 genes, is deleted in Williams syndrome, but duplicated in individuals with autism.

“This region is going to be fundamentally important in understanding the social brain,” says State, associate professor of psychiatry and genetics at Yale University.

All of the studies relied on samples from the Simons Simplex Collection, a repository of genetic samples and clinical data from simplex families. The collection is funded by the Simons Foundation, SFARI.org’s parent organization.

Though the collection now includes 2,712 families, the new studies are based on the first roughly 1,000 families enrolled.

Another study published last month, and based on 20 children and their parents from the collection, found four new de novo point mutations — variations in which a single nucleotide is inserted, deleted or replaced with another — in the children5. Two of the four children in that study carry both an inherited variant and a de novo mutation, and are the most severely affected.

Wigler and State used two different array platforms, NimbleGen and Illumina respectively, to scan the sequences of essentially the same individuals, though the State sample is slightly larger, with 1,174 families. In terms of validating the results, “using both platforms is really useful,” says Scherer. “In many cases, the de novo CNVs [identified] were the same.”

Most of these mutations appear in unique locations, but 16 overlap at four distinct regions of the genome. The study underscores the importance of the 16p11.2 region in autism, which has repeatedly been implicated in the disorder: ten of the duplications or deletions are in this region, and all but one of those is in a male.

The group also found two de novo and two inherited duplications at 16p13.2, a duplication on 16p13.11 in an affected and an unaffected child from different families, as well as a duplication at 7q11.23.

His data suggest that, overall, CNVs in at least 300 spots in the genome confer risk for autism. “It could be many more,” Wigler says. “What that tells us is that we are dealing with a whole host of causes.”

Wigler’s study offers compelling evidence that females are more resistant to autism: Even when they carry the same genetic lesions as males, they do not develop the disorder. “You’ve got a boy and a girl and they both have the same genes, and [only] the boy has autism. That to me is a big puzzle,” Wigler says.

His team found that the autism-linked de novo CNVs in girls are also typically larger than those in boys. “It’s like a meteor strike, a huge insult to the genome that occurs and when it happens there is very little protection against it,” he says.

The researchers also found one instance of a 16p11.2 deletion transmitted by a mother, but overall did not find higher transmission of rare mutations from mothers than fathers, he says. Other studies have reported inheritance of duplications at 16p11.2, but this is one of the few reports of an inherited deletion at the site.

Because mutations identified in CNV studies are by definition rare, occurring in only a few individuals — and in the case of ‘ultra-rare’ mutations, a single person or family — it can be difficult to prove that they are culprits in autism. 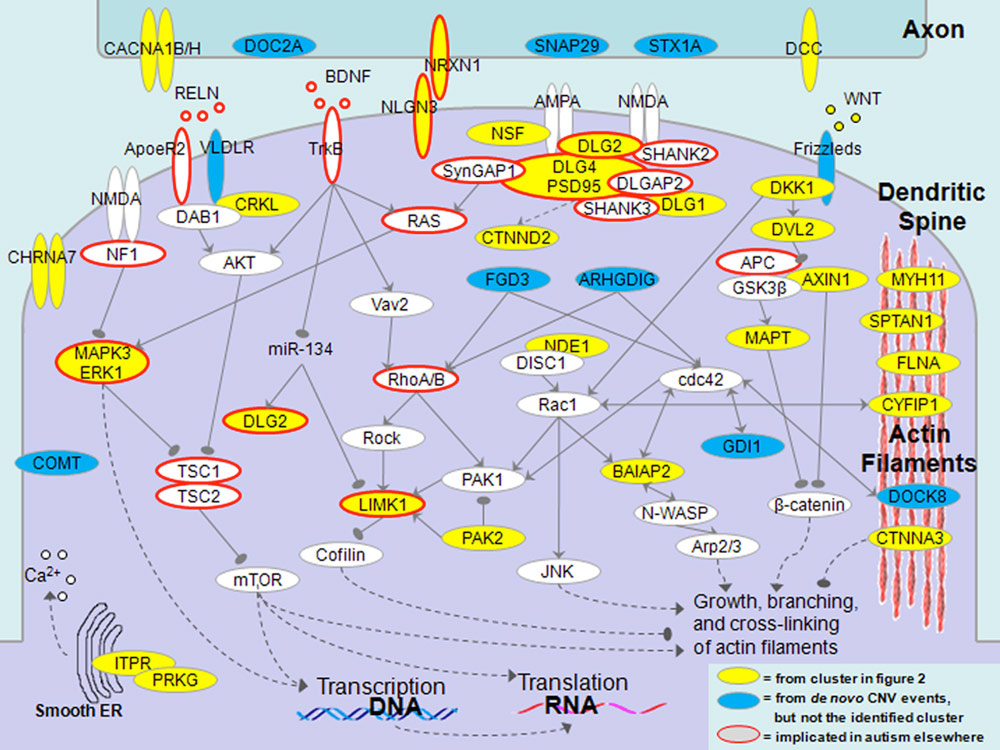 “Imagine this in terms of a gang,” says Vitkup, assistant professor of biomedical informatics at Columbia University. “If every crime is done by a different person, it’s very hard to track. Instead, you look to see if the people who are potentially responsible go to the same school or live in the same neighborhood.”

He and his colleagues mapped associations between genes perturbed by CNVs identified in Wigler’s study. Roughly 40 percent of the genes are part of a functional network needed for synapse formation, neuron movement or the formation of axons, the projections that carry electrical impulses away from the cell.

Vitkup’s analysis implicates several pathways, including the neurexin1-neuroligin3 pathway that forms the postsynaptic density, key to the proper functioning of the synapse.

In autism, glitches in individual genes are not as significant as perturbation of a critical network, Vitkup says. “The commonality of the disease comes not from the fact that specific mutations are very frequent, but because the number of mutations that could produce the [autistic] phenotype is very large.”

One of the challenges in CNV studies is calculating the probability of seeing a rare recurrent de novo event at precisely the same spot in the genome in more than two individuals with the disorder.

This is a more sophisticated metric than merely counting the number of rare CNVs observed in cases versus controls, says Matthew State, associate professor of psychiatry and genetics at Yale University School of Medicine in New Haven, Connecticut.

Because the number of potential CNVs in the human genome is so large — even healthy individuals can carry 10,000 or more variants — researchers first need to pinpoint the genomic regions that could plausibly contribute to autism. Based on that estimate, they can compute the statistical likelihood of observing a recurrent CNV in those regions.

He and his colleagues created a method that establishes a statistical threshold for significant de novo events that he says he would like to share with other researchers.

“We want a methodologically rigorous and stringent standard so that people are able to hone in on things that will be associated with autism and not just general observations,” he says.

Using this technique, his group identified two regions that are clearly over-represented in autism — seven deletions and four duplications in the 16p11.2 region and four duplications at 7q11.23. The probability of seeing the same CNV in more than two people is less than five percent, State says.

State’s study does not show any direct evidence of gender difference in the size or impact of the CNVs. But he found that in males, large CNVs are associated with a lower intelligence quotient (IQ). “We didn’t find that in females,” State says, “which suggests that females might be protected.”

Still, the study contradicts two pieces of conventional wisdom regarding intellectual disability and CNVs, he says. First, it counters the hypothesis that large CNVs are more common among individuals with lower IQs. “Look at our graph and the CNVs are pretty much evenly distributed across the sample,” State says.

It also challenges the belief that large CNVs may be genetically coding for ‘bad brains’ in general and not specifically for autism. “Our study shows that these large risk events are bona fide risks for autism,” says State.