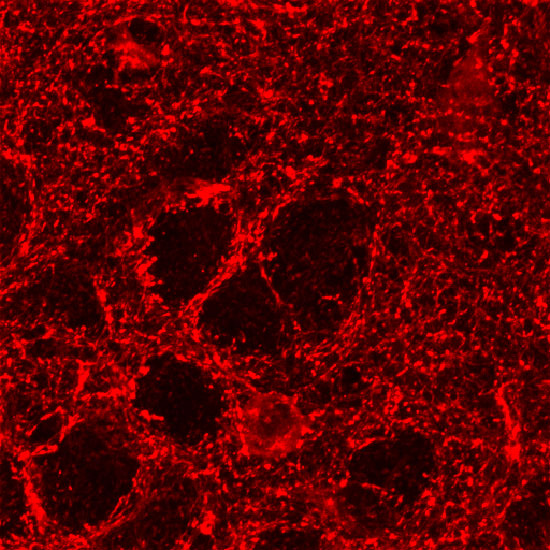 New territory: Unlike in the normal mouse brain (above), the amygdalae of animals lacking the fragile X protein show signaling defects in some neurons.

The amygdala, a brain region that regulates fear and anxiety, shows abnormal neuronal signaling in a mouse model of fragile X syndrome, according to two studies published this summer.

Previous imaging studies in people and behavioral experiments in mice have implicated the amygdala in the syndrome. The new studies are the first to explore cellular defects in the region in fragile X.

In particular, they reveal that mouse models of fragile X — the most common inherited form of mental retardation and autism — seem to have specific differences in the ways their amygdalae and hippocampi behave.

Much of the research on brain dysfunction in fragile X has focused on the hippocampus, a region that processes learning and memory.

Drugs touted as potential therapies for fragile X also appear to be more effective at reversing some of the abnormalities associated with the syndrome in the hippocampus than in the amygdala.

“Looking at the amygdala in the fragile X mouse is an extremely good idea,” says David Hessl, associate professor of clinical psychiatry at the University of California, Davis, who was not involved with either study. According to Hessl’s unpublished work, more than 80 percent of people with fragile X syndrome meet the criteria for at least one anxiety disorder.

Apart from the hippocampus, most fragile X research has focused on the cortex, which has a variety of roles, including the processing of sensory information1,2. But emotional problems are also part of the disorder. About one in three children diagnosed with fragile X syndrome show features of autism, such as trouble socializing and anxiety in new situations.

The work spells a note of caution for the clinical trials testing these drugs in individuals with the syndrome.

Most of the drugs being tested are based on the prevailing hypothesis that too much glutamate — the major excitatory neurotransmitter in the brain — is responsible for the cognitive deficits seen in those with the syndrome. Lowering levels of one type of glutamate receptor, mGluR5, reverses these deficits3.

One of the two new reports, published 22 June in the Proceedings of the National Academy of Sciences, suggests that glutamate signaling might be weaker in the amygdalae of fragile X mice. Although the researchers expected glutamate to act differently in the amygdala than in the hippocampus, “Right off the bat, the differences were quite striking,” says lead investigator Sumantra Chattarji, professor at the National Centre for Biological Sciences in Bangalore, India.

What’s more, when scientists recorded electrical activity in brain slices from fragile X amygdalae, they found that, unlike in normal mice, the glutamate synapses do not strengthen in response to repeated electrical stimulation. In normal mice, this process, called long-term potentiation, is essential for learning and memory4. The mutant mice also have fewer glutamate receptors.

Bathing the neurons for one hour with an mGluR5 blocker called MPEP restores the release of glutamate into the synapses, suggesting that glutamate deficiencies in the area are amenable to therapy. Because this defect seems to be at the releasing end of the glutamate synapse, rather than at the receiving end as is seen in the hippocampus, it opens up a new avenue for therapy, Chattarji adds.

That, combined with the fact that the researchers were able to restore electrical activity in the brains of adult mice, is exciting, notes Chattarji. The approach might yield larger improvements in young mice, because the disease has had less time to damage the brain, he adds.

However, the treatment does not reverse the shortage of glutamate receptors and impaired long-term potentiation. These deficits might be improved with longer treatment times, he says.

MPEP is chemically similar to the mGluR5 blockers being tested in clinical trials. Chattarji says he would like to give those compounds to the mice for weeks or months and then re-examine excitatory signaling in the amygdala.

The finding shows how the mGluR theory of fragile X plays out differently in various brain regions, notes Abdeslem El Idrissi, professor of biology and neuroscience at the City University of New York, who was not involved with either study. “I think it would be too simplistic to think that all neurons would respond the same way to MPEP,” he adds.

Inhibitory signaling also goes awry in fragile X syndrome and autism.  El Idrissi and his colleagues have shown, for example, that compared with control mice, the hippocampus and cortex of fragile X mutants contain fewer receptors for gamma-aminobutyric acid, or GABA, the main inhibitory neurotransmitter of the brain5.

Consistent with El Idrissi’s findings, a study published in July found that neurons in the amygdalae of fragile X mutants are overly excitable. The mutants have weaker and fewer suppressive signals and less GABA in the amygdalae6.

Administering the painkiller THIP, which activates a particular type of GABA receptor in the amygdala, makes neurons in the region less excitable, the group found. This suggests it could be a useful agent to treat the hyperactivity seen in fragile X brains, though there may be serious side effects. In 2007, Merck canceled a phase III clinical trial of THIP for treating insomnia, citing safety concerns such as hallucinations.

The results from this study contradict Chattarji’s findings, which suggest that neurons in the fragile X amygdalae are less excitable. It’s not clear why the two studies found conflicting results, says Chattarji. In his experiment, he used drugs to block inhibitory signaling so that he could study glutamate neurons in isolation. It could be that this method inadvertently triggered compensatory mechanisms that dampen excitatory signals, he says.

The new studies are just beginning to work out the basis of emotional problems in fragile X syndrome, Hessl says. “It’s a massive problem, but I don’t think there’s good evidence yet that its amygdala dysfunction alone causing those problems.”