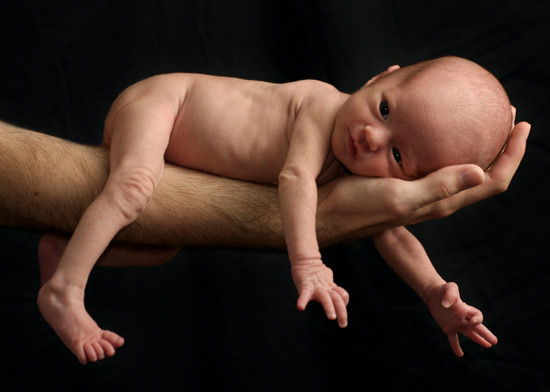 Distinct syndrome: Babies born early show developmental problems, but may also have symptoms, such as a small head, that aren&rsquo;t indicative of autism.

The proposed connection between premature birth and autism may be more complicated than it seems, according to a report published online 5 January in the Journal of Pediatrics1. Early birth may not cause classically defined autism but, rather, may predispose children to autism-like symptoms that are part of a larger syndrome, the researchers say.

“When you come to a diagnosis of autism spectrum disorder in this population, you have to think very hard, actually, ‘Is it the same condition?'” says lead investigator Neil Marlow, professor of neonatal medicine at University College London.

In the new study, Marlow and colleagues relied on clinical information and parental questionnaires and interviews to show that children born before 26 weeks gestation are more likely to have autism-like traits at age 11 than are their classmates born at or near term.

These findings echo several other studies completed over the past few years. But Marlow points out that research looking at brain development and other traits in this subset of children suggests a distinct phenotype.

For instance, although past research has tied autism with increased head size, Marlow’s new study found that premature children with the smallest head sizes at 2.5 years old tend to have the most pronounced autism-like symptoms. Although preterm males are still more likely to show autism-like symptoms than females, the gender ratio for prevalence tends to be more balanced, hovering around 2:1 as compared with 4:1 for typical autism2.

Premature children also seem to be at higher risk of brain injury because of their early birth, which could potentially contribute to some autism-like symptoms.

For at least a decade, scientists have explored the connections between preterm birth or very low birth weight and neurodevelopmental3, academic4, social5, cognitive and behavioral problems6,7,8.

For instance, low birth weight individuals are less likely to finish high school than are peers born at normal weight4. Parents of children born between the 22nd and 32nd weeks of pregnancy report more hyperactivity, inattention and other behavioral problems than do parents of those born at or near term8.

Studies over the past couple of years have shown that preterm babies are up to three times more likely to develop autism-like traits in early childhood than are babies born at term. Researchers don’t know how many of these children will go on to be formally diagnosed with the disorder, but some say that preterm birth could be a significant risk factor.

“Being born preterm at least appears to be a larger risk than any others identified at this point,” with the exception of specific genetic causes and syndromes, which are thought to cause up to 20 percent of autism cases, notes Karl Kuban, chief of Boston Medical Center’s pediatric neurology division.

It is difficult to unravel whether premature birth is in and of itself a risk factor for autism, or whether other factors predispose to both preterm birth and autism. Because most experts believe the disorder develops in the first half of pregnancy, autism risk probably isn’t just a consequence of being born early, Kuban argues. More likely, he says, it involves a combination of environmental and unrecognized genetic risk factors affecting the brain.

Understanding developmental consequences of preterm birth will only get more pressing in the years to come. Premature births are on the rise in the United States, growing from 9.5 percent in 1981 to 12.7 percent in 2007. Because of improved medical technology and infant care, babies can now survive birth as early as the 22nd week of pregnancy.

“Today we have the sickest, smallest survivors,” notes Catherine Limperopoulos, assistant professor of neurology and neurosurgery at McGill University and research associate in neurology at Harvard University.

In the first study looking specifically at early signs of autism in toddlers born very early, in 2008, Limperopoulos and her colleagues studied 2-year-old children born between 23 and 30 weeks gestation and weighing less than 3 pounds, 3 ounces9.

The researchers screened 91 children for early indicators of autism using a parental questionnaire called the Modified Checklist for Autism in Toddlers, or M-CHAT, designed to identify children at elevated risk of developing autism spectrum disorders. The team found that 25 percent of the preterm children screened positive, compared with known rates of 5 to 6 percent of children in the general population.

That study showed that premature children tend to have so-called internalizing behavior, such as being socially withdrawn or suffering from anxiety or depression.

Kuban reported similar findings last April, in a study of 988 children born before the 28th week of pregnancy10. He and colleagues in the Extremely Low Gestational Age Newborns (ELGAN) Study group found that more than 21 percent of these premature babies tested positive on the M-CHAT at 2 years old.

The M-CHAT is quite sensitive, identifying most children at risk of autism. But it also gives many false positives: only about one-tenth of the children who screen positive go on to be diagnosed with an autism spectrum disorder.

Consequently, researchers say it’s unlikely that most preterm children who test positive for early autism symptoms will go on to have a formal diagnosis of autism. “I do feel that these reports are somewhat preliminary,” Limperopoulos says.

Still, after accounting for motor, visual and hearing deficits, the ELGAN study found that 16 percent of preterm children still tested positive on the M-CHAT screen — almost three times the rate observed in the general population.

“What’s critical in all of these studies are the diagnostic follow-up tests,” Limperopoulos says. She and her colleagues are completing follow-up testing for autism in preterm children around 5 years old who screened positive on M-CHAT when they were younger.

Researchers from the ELGAN study are also following children in their own preterm cohort and plan to look for autism and other outcomes when the children are 9 years old.

Despite the many studies hinting at links between autism and early birth, the biology underlying this apparent connection is unclear.

Researchers don’t know, for instance, whether the cause of the autism-like symptoms also happens to increase the likelihood of preterm birth, or whether complications that typically come with preterm birth — such as the incomplete development of the brain and other organs — cause babies to develop autism.

To explore such questions, researchers are taking a closer look at the brains of infants born early.

Limperopoulos and her team found that one-third of preterm children who test positive on M-CHAT have abnormal brain scan results — such as tissue loss or bleeding in the brain — when they are around ten months old. The researchers are investigating how injury to the cerebellum, a brain region involved in coordination, motor control and some learning-related functions, might relate to autism risk in premature babies.

Others have also detected injury or impaired growth in brain scans of preterm children, particularly affecting the brain’s white matter, the insulated nerve fibers that transmit messages between brain cells14,15,16,17.