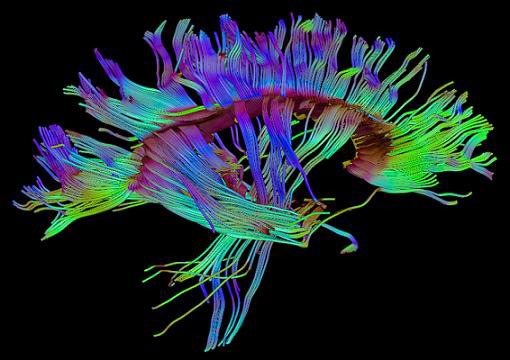 Size matters: Based on diffusion tensor imaging, two language-related areas of the brain are much smaller in non-verbal children with autism than in controls.

Size matters: Based on diffusion tensor imaging, two language-related areas of the brain are much smaller in non-verbal children with autism than in controls.

Non-verbal children with autism show structural differences in key language areas of the brain compared with controls, according to a poster presented Saturday at the Society for Neuroscience annual meeting in Washington, D.C.

A new therapeutic approach that involves hand-tapping and song-like intonation may help these children learn to produce speech sounds, the researchers say.

Although the study is small, several observers at the poster session were surprised to see an imaging study of non-verbal children at all. Because it is typically difficult to get these children to follow directions and lie still during a scan, they are often left out of imaging studies.

How did these researchers manage to include the children in their study? “Weeks and weeks of training,” says Catherine Wan, instructor in neurology at the Music and Neuroimaging Laboratory at Beth Israel Deaconess Medical Center in Boston, who presented the work. The researchers scanned some of the children while they were sleeping but not artificially sedated.

The researchers tested a new therapeutic intervention called auditory-motor mapping training (AMMT) in eight non-verbal children. In this intervention, children are taught to use intonation, or a sing-song voice, and make rhythmic movements such as drumming with palms on a pad while producing each syllable or word.

About one-quarter of children with autism cannot speak at all, and few therapies are available to help them. “This therapy hopefully will help to bridge the gap,” Wan says.

All of the children in the study had received at least two years of intensive speech therapy, but still couldn’t produce any words. After participating in AMMT five times a week for eight weeks, the children correctly reproduced significantly more syllables and words than they had before treatment.

The children were also able to make sounds that they hadn’t practiced during the therapy sessions. Data from six of these children was published in September in PLoS One1.

The researchers are conducting a pilot controlled study of AMMT in non-verbal children. They also plan to perform DTI before and after children participate in AMMT in order to determine whether the therapy strengthens the language pathways in the brain.

Wan says AMMT is particularly likely to affect the arcuate fasciculus, which links an area involved in language comprehension with one involved in planning the movements of speech.

Matthew Anderson, director of neuropathology at Beth Israel Deaconess Medical Center, notes that parents of children with autism sometimes report that their child is more communicative after some kind of physical activity, such as riding a bicycle.

“That’s what the [researchers] are showing here,” says Anderson, who was not involved with the work. “They add this motor element and then [speech sounds] start to come out.”