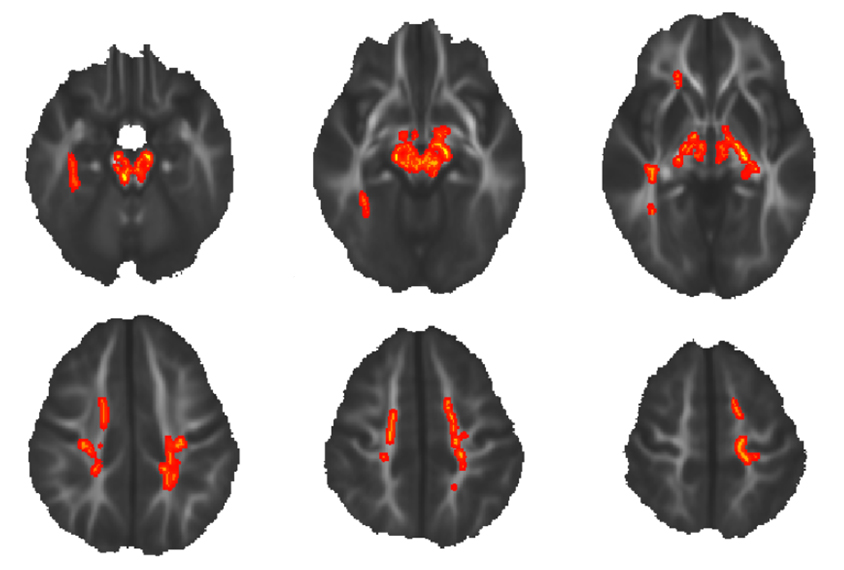 Lit pathways: Imaging shows unusual patterns in the brains of some autistic children.

The long fibers of neurons in the brains of young children with autism are structured differently than those of their neurotypical peers, according to the largest analysis of its kind1.

The study, which looked at children aged 2 to 4 years, confirms the results of a handful of smaller studies in children of that age. However, the observations run counter to those widely reported in older children and adults with autism.

Nerve fibers and the support cells that connect different regions of the brain together compose ‘white matter.’ Some researchers have proposed that connectivity between brain regions is disrupted in autistic people, perhaps as a result of anomalies in white matter.

The researchers used a technique called diffusion-weighted imaging, which tracks the movement of water molecules along white matter. Based on the water’s path, scientists can infer the positions of these tracts, says lead investigator Christine Wu Nordahl, associate professor of psychiatry and behavioral sciences at the University of California, Davis.

In typical children, a measure of the water’s movement increases with age, but the findings show that the measure decreases with age in people with autism.

Experts unrelated to the study say they find the results convincing.

“This is the first such study to be definitive,” says Pratik Mukherjee, professor of radiology at the University of California, San Francisco, who was not involved in the study.

“This is a really impactful study,” says Ralph-Axel Müller, professor of psychology at San Diego State University in California, who was not involved in the study. “[It is] very cautiously interpreted and a really good addition to the literature.”

Scientists generally interpret higher values as better than lower ones, and some work has described white matter with low values as having altered structural integrity.

Interpreting the new study’s results is complicated, however, because diffusion-weighted imaging is only an indirect measure of white matter structure. What’s more, white matter differences may spring from different underlying causes in young children than in older children and adults. For example, FA values may reflect how many neurons are in a particular tract, or how well insulated the fibers are.

The researchers analyzed scans from 42 autistic girls and 85 autistic boys, as well as 26 typical girls and 28 typical boys, all aged 2 to 4 years. They scanned the children at night while the children slept.

“There seems to be something analogous that we see in the diffusion-imaging literature,” Müller says.

However, previous studies have shown that sometime after age 4, autistic people have lower FA values than their typical peers.

“There is a much smaller literature in younger children, right around the age of diagnosis and younger, that is also very consistent but in the opposite direction,” says Derek Sayre Andrews, a postdoctoral researcher who worked on the study.

Precisely when autistic children’s brains switch from having unusually high to unusually low FA is not known. “It’s not clear when it flips and becomes the opposite,” Müller says.

Where in the brain these differences are localized may hint at the underlying biology of autism. The study found the strongest differences in tracts going to and from the cerebellum, a part of the brain that has been implicated in autism but whose involvement has been underexplored. The work was published in December in the Journal of Neurodevelopmental Disorders.

The researchers also looked at three other measures of white matter structure that are closely related to FA. For one in particular, called axial diffusivity, autistic girls show higher values than autistic boys or typical children of either sex.

This difference is most apparent in the corpus callosum, a bundle of nerve fibers that bridges the brain’s two halves and has also been implicated in autism.

“They were able to show a very pronounced sex difference in the way that white matter microstructure is abnormal in autism,” Mukherjee says. “This may be a clue about differences in the genetic causes of autism in boys versus girls.”

The researchers are following the children from the study to track how FA and other measures change with age. They are also examining whether the intensity of those changes is associated with severity of autism traits.