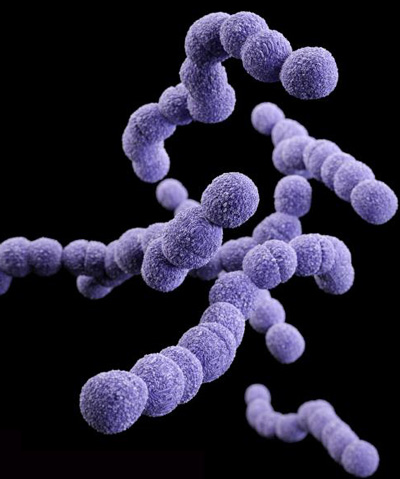 CDC/ Melissa Brower Susceptible sex: Male rats exposed to group B streptococcus in the womb have more severe symptoms than do females.

Infection with group B streptococcus bacteria in pregnant rats triggers brain abnormalities and autism-like behaviors in their pups — especially in males. Researchers presented the unpublished results today at the 2014 Society for Neuroscience annual meeting in Washington, D.C.

Group B strep infection is common, affecting up to 30 percent of pregnant women. It rarely causes symptoms, and doctors only test for it two weeks before the baby’s due date. If the test is positive, they administer antibiotics to protect the infant during delivery. But the bacteria’s effects on the developing fetus are unclear.

Epidemiological studies suggest that a serious infection in a pregnant woman raises the risk of autism in her child by up to 37 percent.

In the new study, researchers injected pregnant rats with group B strep. They then assessed the pups using behavioral tests and analysis of their postmortem brains. They also delivered some pups early via Cesarean section to look at their placentas. They found that the placentas show increased numbers of neutrophils — a type of white blood cell involved in the immune response.

The placentas of male pups have especially high numbers of neutrophils and show increased levels of the inflammatory molecule interleukin-1beta, the study found. This molecule is also elevated in the blood of male fetuses.

“The inflammatory pathway seems to be more prominent in the exposed male fetuses,” says Marie-Julie Allard, a graduate student in Guillaume Sébire’s lab at the University of Sherbrooke in Quebec, who presented the work. If the same is true in people, it could explain why autism affects four boys for every girl, Allard says.

Male rats exposed to strep in the womb vocalize less than do rats exposed to saline. They also socialize less with other rats, explore less in an open field test, and take longer to seek out a familiar smell — behavioral abnormalities that recapitulate some features of autism. The female rats do not show any of these abnormalities.

The male and female rats both show some sensory impairments. They react strongly to loud sounds even when they’re preceded by softer sounds, a phenomenon called prepulse inhibition. A close look at their brains reveals a thinner frontal cortex and a thicker cingulum — a tract of nerve fibers that connects different brain regions — than in controls.

Male rats also have a thinner corpus callosum, which connects the brain hemispheres, than controls do. And they have larger lateral ventricles, the fluid-filled spaces in both brain hemispheres. Both of these features are seen in some people with autism.