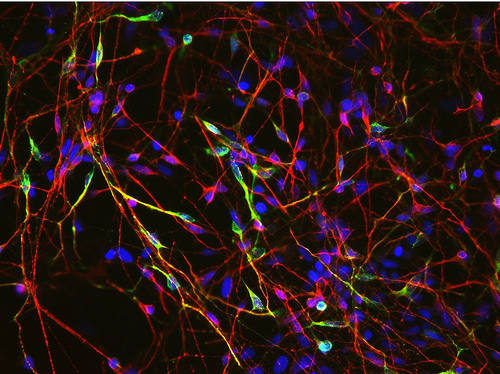 Dish network: Researchers have found that a genetic glitch related to autism disrupts the development of neuronal connections.

Researchers are growing neurons from stem cells in order to explore how autism-related genetic defects wreck havoc on the cell.

A mutation in the neuroligin 4 (NLGN4) gene disrupts the normal development of synapses, the junction between neurons, according to unpublished data shown yesterday at the Society for Neuroscience annual meeting in San Diego.

Several groups are turning stem cells into neurons in order to model autism and related disorders, such as Rett syndrome and Timothy syndrome. This approach may help researchers clarify the underlying biology and discover new drugs.

“The hope is that we may hone in on a cellular [signature] that we may then use to screen drug compounds that might revert those defects,” says Ji-Eun Kim, a postdoctoral fellow in Anirvan Ghosh’s lab at the University of California, San Diego.

Kim focused on NLGN4, which belongs to a family of genes that have been associated with autism. She found that when NLGN4 is over-expressed in 3-week old iPS cells, it causes more synapses to form, suggesting that the protein is an important player in normal synapse development.

NLGN4 is known to influence synapse development in rats, but this is the first demonstration of this effect in human cells.

Kim also investigated the effects of a particular NLGN4 mutation — a deletion in exon 4 dubbed ∆E4 — that has been associated with autism. She found that when iPS cells over-express this mutant, they don’t show the same increase in synapse proliferation.

“We found that the mutant form was completely trapped in the intracellular compartment and was unable to reach the surface, and failed to induce synapses in the cells,” she says.

Kim plans to investigate how the mutation affects 6-week-old iPS cells, which have many more synapses than 3-week-old ones do. She is also looking at the effects of autism-related mutations in other neuroligin genes, using these iPS cells, as well as another line made from foreskin samples. Eventually, she also plans to make reprogrammed neurons from skin samples taken from individuals with autism who carry specific genetic mutations.