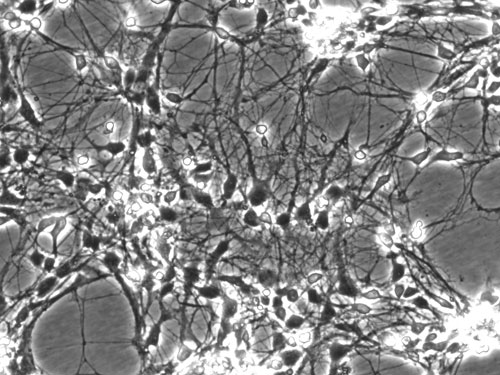 Neural stem cells from people with Rett syndrome show early signs of dysfunction, according to unpublished research presented at the 2012 Society for Neuroscience annual meeting in New Orleans. The results come from a comprehensive analysis of protein expression in neural progenitor cells, which mark the developmental stage between stem cells and neurons.

“What we’re trying to do is see if we can find the earliest molecular changes in patient-derived stem cells,” says senior investigator Anirvan Ghosh, professor of neurobiology at the University of California, San Diego, and head of discovery for the central nervous system at Swiss drugmaker Roche.

The researchers also found defects in the signaling of insulin-like growth factor-1 (IGF-1), a protein that is in clinical trials as a treatment for Rett syndrome.

“There is a lot of interest in IGF therapy for Rett, but it’s not been clear when you need to start in order to have a benefit,” says Ghosh.

Previous studies in animal models suggest that the symptoms of Rett syndrome can be reversed even in adulthood1. “But at the same time, we are also discovering that defects start much earlier than we thought,” says Ghosh. “If we can [target treatment] earlier, we might have a greater impact.”

The researchers are using the same approach to study cells derived from people with schizophrenia and tuberous sclerosis complex, a genetic disorder that is sometimes associated with autism.

Rett syndrome, a progressive disorder that strikes mostly girls, is typically caused by mutations in the MeCP2 gene, which is located on the X chromosome. A 2010 study found that stem cells derived from people with the disorder have signaling defects and produce fewer functional neurons than controls do.

In the new study, the researchers aimed to find differences in the expression of thousands of proteins — a much more comprehensive approach than has been done before — and to study an early stage of neural development.

“Are there changes at the progenitor stage that might make cells susceptible later in life when the disorder is manifested?” asks Ghosh. Children with Rett syndrome don’t show symptoms until 6 to 18 months, by which time the bulk of neurons are fully formed.

The researchers created induced pluripotent stem (iPS) cells, derived from the skin of males with Rett syndrome and their unaffected fathers. Comparing genetically related individuals lowers the background genetic variability, making it easier to find real differences. (Though the disorder strikes mostly girls, the researchers chose to focus on males because they lack a good copy of the X-linked gene. Individual cells in girls can express either the good or the mutated copy of the X chromosome.)

The researchers grew both sets of neural progenitors with labeled amino acids. They then simultaneously analyzed proteins from both sets of cells via mass spectrometry.

Preliminary results suggest that in Rett cells, proteins involved in DNA and RNA processing are expressed at higher levels, and those involved in cell adhesion at lower levels, than in controls.

One striking finding is that different cell lines show different defects in IGF-1: Some have chronically high IGF-1 signaling, and others are chronically reduced, says Ghosh. The differences may result from the fact that the individuals have different mutations in MeCP2, he says.

“Whether or not a patient would respond to IGF-1 might depend on the basal state of IGF signaling in that individual,” he says.

Screening iPS cells from individuals prior to treatment may help determine the best candidates for their treatment, he adds.  (It costs about $2,000 to make an iPS cell line, comparable to the cost of many medical tests.)

This approach would also benefit autism more broadly. “In autism, which is a heterogeneous disorder, I am convinced that not all individuals would respond to the same drug,” says Ghosh.

The researchers plan to use the cells to screen for drugs that can improve specific signaling pathways, such as IGF-1, as well as drugs that can correct the cell’s protein signature. “Rather than one specific feature of a cell, by looking at the proteome, you have a picture of the cell overall,” says Ghosh.