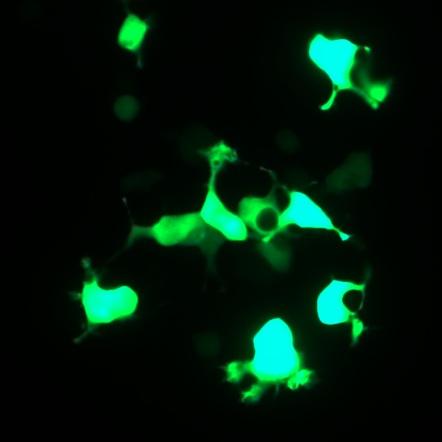 Bright lights, big risk: Variants of genes in the MET pathway nearly double the risk of autism. Here, cells transfected with the MET receptor tyrosine kinase and GFP have more dendrites than do normal cells.

A genetic pathway that is required for brain development, immune responses, and gut cell repair might be linked to autism in at least a subset of people, according to a study published on 18 July1.

The study, published online in Autism Research, has uncovered two genes in the pathway that might increase the risk of autism.

Led by Vanderbilt Universityʼs Pat Levitt, the researchers screened genetic sequences from members of 664 families ― made up of 1,228 people with autism and 1,484 without ― and 312 controls. They found that alterations in two genes normally expressed in the colon and immune system, PLAUR and SERPINE1, nearly double the risk for autism.

PLAUR and SERPINE1 are both key members of a signaling pathway known as the MET receptor tyrosine kinase pathway, long known for its role in cancer metastasis.

The pathway is also known to be important in brain development, gastrointestinal repair, and the regulation of immune cells. This combination of roles, and the fact that the MET gene is located on 7q31, a chromosomal region implicated in autism, led Levittʼs group to investigate its potential involvement in autism.

In 2006, based on a scan of single nucleotide changes in genetic sequences from families with a history of autism, the group showed that some genetic variants in MET tyrosine kinase double the risk of autism2.

“Itʼs particularly interesting because we know that MET and PLAUR interact in cells to regulate how efficient this MET signaling pathway is,” says Daniel Campbell, a research assistant professor in pharmacology at Vanderbilt, and first author on the study.

Although many genes are involved in autism, the genes may be grouped into smaller numbers of biological pathways or networks, notes Martha Herbert, an assistant professor of neurology at Harvard Medical School.

“If a gene is associated with autism, then perhaps other genes in pathways or networks impacting the same thing that this gene is affecting may also turn out to play a role,” Herbert says. “I think we should be using a lot more of this pathway-oriented analysis to target our search for relevant genes.”

Individual pathways associated with autism may also seem unrelated at first, but further investigation could show them to be linked together, says Edwin Cook, a visiting professor of psychiatry at the University of Illinois in Chicago.

“The question for the larger field is how does this MET related pathway tie in with other findings and other pathways,” he says.

Levitt and his colleagues are pursuing two separate lines of research to build on their findings. They are testing whether mice with the same genetic variations as those identified in the present study have gut and immune dysfunctions. Previous work has shown, for instance, that PLAUR mutant mice have problems with the migration of nerve cells during brain development3.

The researchers are also trying to see how these specific genetic variants are related to gut or immune problems observed in autism. “Weʼre most interested in identifying those individuals who are most likely to have deficiencies in PLAUR or MET or both,” Campbell says.