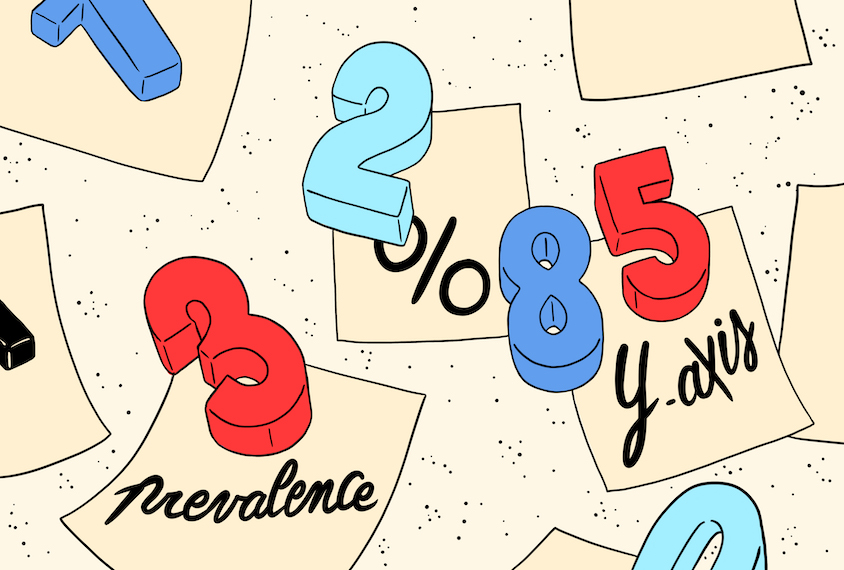 8: The percentage of participants in SPARK — a large genetic study of people with autism — whose condition has been traced to a genetic cause. (SPARK is funded by the Simons Foundation, Spectrum’s parent organization.) Among 21,149 participants whose genomes have been analyzed, 1,711 have a single-nucleotide or copy number variant directly tied to autism. The odds of finding a genetic cause were 1.4-fold higher for autistic people whose parents both submitted DNA samples to the study, according to results presented last week at the annual meeting of the American College of Medical Genetics and Genomics in Nashville, Tennessee.

3.5: The percentage of children who had an ischemic stroke and were later diagnosed with autism. The study, published in Neurology in March, used data from Swedish health registries to identify 1,322 children who had a stroke between the years 1969 and 2016; 46 of them subsequently received an autism diagnosis. Autism affects about 1 percent of people in the general population in Sweden.

25.1: The percentage of autistic children aged 10 to 17 who are obese. The odds of obesity in autistic children were elevated for those with depression or anxiety, according to results published in Research in Autism Spectrum Disorders in February.

23.7: The percentage of children born extremely preterm who have repetitive behaviors, as reported by parents and teachers on the Autism Spectrum Screening Questionnaire. This fraction is nearly six times higher than for children not born preterm, according to data from the Bergen Child Study in Norway. The results, from a study of 216 participants, were published in European Child & Adolescent Psychiatry in March.

2.08: The increased odds that a child with a disability will experience violence, compared with a child without a disability, according to a meta-analysis of 98 research studies published between August 2010 and September 2020. Violence, in this review, included neglect, bullying and physical, sexual or emotional violence, and estimates varied widely across studies. The results appeared in The Lancet Child & Adolescent Health in March and reflect children with many different conditions, including autism.

47: The increased chance, as a percentage, that women in Taiwan who have rheumatoid arthritis before or during pregnancy will have a child with autism. Published in Scientific Reports in March, the study controlled for a woman’s income and the urbanicity of her home address, as well as co-occurring mental conditions, but not for a slew of other factors linked to autism. Diagnoses of attention deficit hyperactivity disorder and bipolar disorder were also increased among children born to a parent with rheumatoid arthritis.