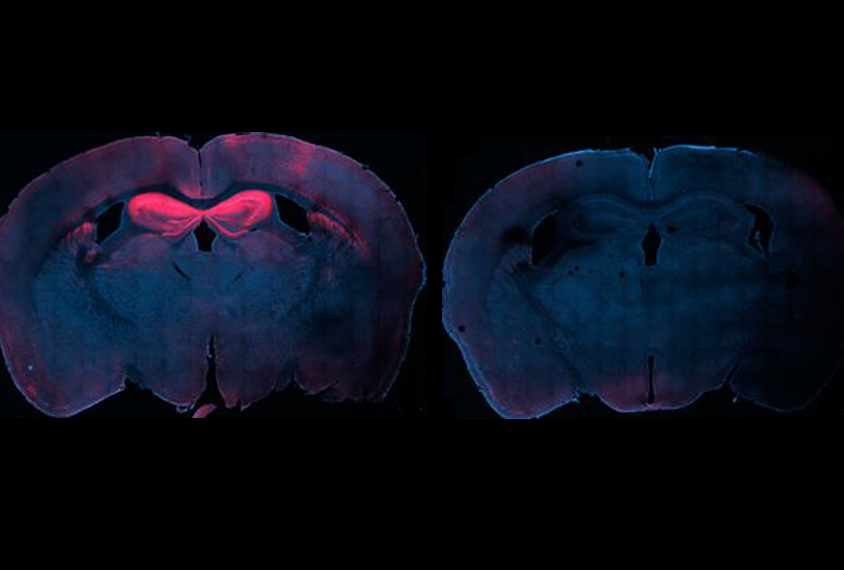 Applying sound waves to a mouse’s head gently pushes molecular probes into the brain to manipulate activity there. The technique provides a noninvasive way to control specific brain circuits and may ultimately lead to treatments for conditions such as autism.

Researchers described the approach today at the 2018 Society for Neuroscience annual meeting in San Diego, California.

“Neural circuits are at the core of most diseases, but we don’t have methods of targeting specific neural circuits noninvasively,” says Jerzy Szablowski, a postdoctoral fellow in Mikhail Shapiro’s lab at the California Institute of Technology in Pasadena, who presented the work.

In an established technique called chemogenetics, researchers use a virus to ferry synthetic receptors into neurons. When a drug binds to the receptors, the reaction activates or inhibits the neurons.

With chemogenetics, however, researchers must inject the virus into the brain. The virus cannot enter from the blood, because a set of specialized cells form a blood-brain barrier. The injections require surgery and often damage the brain.

Szablowski and his colleagues used ultrasound to push the virus through the barrier in mice.

They injected the virus into the bloodstream of the mice. Then they injected microscopic gas bubbles and applied an ultrasound probe to the head, delivering a beam of sound waves to six spots across the hippocampus, a brain region that controls learning and memory. The sound waves cause the gas bubbles to vibrate, which exerts a gentle pressure on the blood-brain barrier, causing it to open temporarily. The viruses diffuse through the openings.

The beam is focused so that each application affects only an area about 1 to 4 millimeters in diameter, allowing researchers to precisely control what parts of the brain the virus infects.

After six to eight weeks, the mice produce the synthetic receptors throughout the hippocampus. Because of the properties of the virus, the receptors are expressed only in neurons that boost brain activity.

The researchers gave some of the mice a drug that binds to the receptors, dampening the activity of the neurons. They gave the mice three painful foot shocks in a chamber. A day later, control mice freeze when placed in the chamber — a sign that they formed fear memories. But mice given the drug do not freeze, suggesting that inhibiting the hippocampal neurons interferes with memory formation.

The researchers did not find signs that the receptors are expressed anywhere other than the hippocampus. And most of the brain appeared unaffected by the sound waves, although the researchers did see small areas of tissue damage.

Szablowski’s team is trying to improve the spatial accuracy of the sound waves. The researchers are also testing the technique in larger animals, such as rats. They described their method in the July issue of Nature Biomedical Engineering1.

This article has been modified from the original. The beam is about 1 to 4 millimeters in diameter, not 14 to 20 as originally stated.