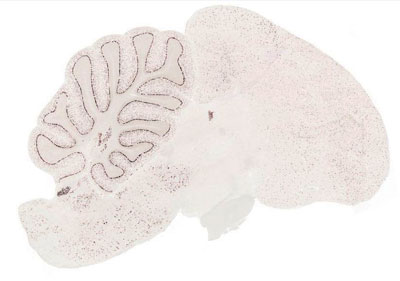 Pretty pictures:  A new atlas of gene expression in the zebra finch aims to illustrate the expression of more than 1,500 genes, including one that codes for the autism-linked protein parvalbumin.

Some song-related areas in the zebra finch brain and language areas in the human brain show strikingly similar patterns of gene expression, according to unpublished research presented Sunday in a poster at the Society for Neuroscience annual meeting in New Orleans.

Based on the analysis of neural circuits and neuronal subtypes, studies have suggested that these regions have analogous functions. The new study, which relies on microarrays, supports that theory.

Another poster, also presented Sunday by a different team, introduces a new public resource for studying gene expression in the zebra finch.

“People are starting to use songbirds not just as a behavioral model but as a molecular model,” says Andreas Pfenning, who presented work he did while he was a graduate student in the laboratory of Erich Jarvis at Duke University in Durham, North Carolina.

Autism researchers are also increasingly interested in songbirds such as the zebra finch to try to understand language difficulties in autism.

Songbirds are among the few types of animals capable of vocal learning. They learn to sing the way humans learn to talk, by listening to and mimicking other members of their species.

“Unless you want to have an elephant-dolphin-seal lab, songbirds are the best model,” says Pfenning.

Pfenning and his colleagues measured expression of 13,000 genes in different areas of the zebra finch brain, using microarrays. They then devised a computer algorithm to compare these findings with data from the Allen Human Brain Atlas and searched for areas of shared gene expression.

Overall, gene expression patterns in the RA, a region involved in song production in the zebra finch, are strikingly similar to those in a section of the precentral gyrus, part of the primary motor cortex in humans, the study found.

This specialized gene expression pattern is shared by budgerigars (parakeets), which are capable of vocal learning, but not by ring doves or quail, which are not.

“We think this is convergent evolution at the level of gene expression,” Pfenning says. That is, zebra finches, budgerigars and humans independently evolved the same patterns of gene expression to support vocal learning.

In addition, gene expression in Area X, a region of the zebra finch brain involved in song learning, aligns with the head of the caudate nucleus, a part of the human brain associated with speech production.

However, the researchers didn’t find a good match for song areas in the zebra finch called the HVC and LMAN. Some scientists have suggested that these areas are analogous to Broca’s area and Wernicke’s area, which are involved in speech production and speech comprehension, respectively, in people. “But we didn’t find any molecular similarity [to those regions],” Pfenning says.

Analogous regions may exist in a specific layer of the human cortex. But the Allen Human Brain Atlas pools data from all six layers of the cortex, which would obscure patterns of gene expression in any single layer. “We just can’t find them right now,” Pfenning says.

Unlike humans, songbirds have a cortex with a single layer. This anatomical difference calls for caution in interpreting the study, says Claudio Mello, associate professor of behavioral neuroscience at Oregon Health and Science University, who was not involved in the work. “There are a lot of assumptions that you make when you go across taxa,” he says.

Mello is leading a project that aims to address this problem. He and his colleagues are using a technique called in situ hybridization to create a large collection of zebra finch gene-expression data called the Zebra Finch Expression Brain Atlas (ZEBrA), launched earlier this year.

The project aims to release data and high-resolution images relating to between 20 and 40 new genes each month, eventually including up to 2,000 genes.

Pfenning says the resource will be a big help for cross-species studies like his, because in situ hybridization gives a more precise and fine-grained picture of gene expression than do microarrays. “You can go more deeply into subregions, and test hypotheses generated based on microarrays,” he says.