Some motor problems in autism may arise from cells outside brain 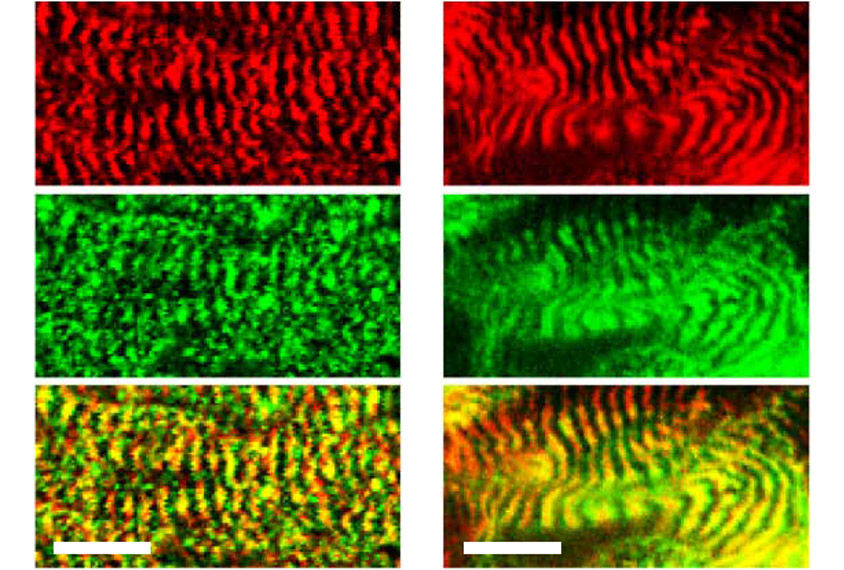 The autism gene SHANK3 is crucial for the development and function of muscles and the motor neurons that control them, according to a new study1.

This relationship may explain why some people with mutations in the gene have low muscle tone, says co-lead investigator Maria Demestre, senior researcher at the Institute for Bioengineering of Catalonia in Barcelona. “It opens an avenue for treatment.”

Between 1 and 2 percent of people with autism have a mutation in SHANK3. Deletions of the chromosomal region containing SHANK3 lead to Phelan-McDermid syndrome, characterized by intellectual disability, speech delay and, often, autism. One of the earliest signs of the syndrome in infants is hypotonia, or low muscle tone, which can result in difficulty feeding and a delay in reaching developmental milestones such as crawling and walking.

SHANK3 encodes a protein that helps neurons communicate throughout the brain. But studies have shown that the gene is also found in other parts of the body and that mutations or deletions of genes in peripheral cells can contribute to autism traits2.

SHANK3 is heavily expressed throughout the motor system of both mice and people, the new work shows. Muscle cells derived from people with Phelan-McDermid syndrome fail to mature, and mice deficient in SHANK3 have poor muscle function.

The results add to “the growing appreciation of the role of autism-associated genes — in this case, SHANK3 — outside of the brain,” says David Ginty, professor of neurobiology at Harvard Medical School, who was not involved in the study.

Demestre and her colleagues developed stem cell lines by reprogramming adult cells from the hair of five people with Phelan-McDermid syndrome and three controls. They then added a chemical cocktail to transform the stem cells into motor neurons, the cells that carry signals from the brain to the muscles to tell them to contract. They grew these cells in culture with muscle fibers from typical people.

When the researchers instead generated muscle fibers from the stem cells and cultured them with control motor neurons, those derived from people with Phelan McDermid again made immature connections. The structure of the muscle fibers also appeared abnormal, with shorter contractile units than average, which may cause weaker muscle function.

Similarly, muscle fibers from mice with SHANK3 deficiency have short contractile units. These mice also struggle to hang from a wire, a test of their muscle strength, and drop from the wire significantly earlier than controls.

SHANK3 protein serves as a scaffold, supporting receptors at neuronal junctions. That role may explain why cells lacking the gene have atypical receptor clusters and structural problems, says Luigi Boccuto, professor of genetics at Clemson University in South Carolina, who was not involved in the study. “If we have disruption at junctions, those junctions may be less efficient.”

Demestre and her colleagues also treated the cultures of cells derived from people with Phelan-McDermid syndrome with the drug lithium, which is known to increase levels of SHANK3 protein and has been used for psychiatric symptoms in people with Phelan-McDermid syndrome. The researchers found that the cells then produced mature clusters of receptors.

The team treated the SHANK3-deficient mice with CK2017357 (tirasemtiv), a drug that amplifies muscles’ responses to signals from neurons, and found it strengthened their grip.

The results, though preliminary, suggest that boosting the signal from motor neurons to muscles could help to overcome the inefficiency at those junctions, Boccuto says.

Improving the function of these neurons at an early stage could have widespread effects on brain development, says Lauren Orefice, assistant professor of genetics at Harvard University, who was not involved in the study. But “whether or not you can use these treatments with children remains to be determined,” she says.

Infants with Phelan-McDermid syndrome can have hypotonia from birth, so providing treatment early enough may be a challenge. It is also unclear if the drugs have any long-term effect on muscle function.

Demestre’s team is currently testing other compounds that directly target the peripheral nervous system. And they are working to fully understand the mechanism behind SHANK3’s effects.

“We know it’s in the junction between the muscle and motor neurons,” Demestre says. “We still don’t know so much what it’s doing there.”