Some infants at risk of autism show improvements at 9 months 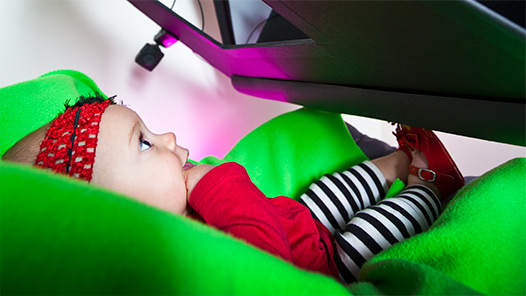 Kay Hinton Eye gaze: As they grow older, infants with autism spend less time looking at a woman’s eyes in a video clip.

Some infant siblings of children with autism initially behave like children with the disorder, but show improvements in their social skills around 9 months of age. The unpublished research, presented yesterday at the 2014 International Meeting for Autism Research in Atlanta, suggests that these children possess a “resilience” that keeps them from developing autism.

“By understanding this phenomenon, we may get many more children who are at higher genetic risk to also end up unaffected,” says Ami Klin, director of the Marcus Autism Center in Atlanta, who presented the findings. The 9-month mark may prove to be the ideal time for early interventions, he says.

So-called baby sibs of children with autism are at up to a 20-fold higher risk of autism compared with the general population. Many research groups track the development of baby sibs to identify early signs of autism.

Klin and his colleagues discovered this intriguing finding when following up on the results of an eye-tracking study published in November. The study made a splash in the popular media, reporting that baby boys later diagnosed with autism lose interest in others’ eyes between 2 and 6 months of age.

The study assessed 11 baby sibs who developed autism and 25 typically developing controls ten times from 2 to 24 months of age. To measure early symptoms of autism, the researchers outfitted the infants with an eye-tracking device and noted how often they looked at the eyes of a friendly woman in a recorded video. “Eyes are not only the window to the soul, they are also the window to social neuroscience,” says Klin.

At the meeting yesterday, Klin reported analysis from a few more children. As they grew up, 29 typically developing infants looked at the woman’s eyes the same amount or more, he said. By contrast, 13 infants who were eventually diagnosed with autism focused on the eyes less and less with age.

This drop in eye contact may relate to when babies stop looking at eyes reflexively and start actively seeking them out as a form of communication, says Klin.

Klin also reported new findings from 28 baby sibs who do not have autism. Ten of these siblings have some symptoms of autism, however — a condition called the broad autism phenotype (BAP).

Of the 28 siblings, 16 have eye-tracking patterns that are nearly indistinguishable from those of controls. All but one of these siblings show no signs of autism.

The other 12 siblings showed a decline in eye contact in the first six months of life, similar to the infants who went on to be diagnosed with autism; 9 of these 12 siblings have BAP.

The findings suggest that these 12 siblings started off on a course toward autism, but at some point switched trajectories and started to improve, says Klin.

The researchers found that these siblings start to look more at eyes starting at 18 months of age, but that this “course correction” in fact begins at 9 months. This suggests that interventions for autism may need to start around the 9-month mark, says Klin. “We have a lot of nice treatment trials around 12 months,” he says. “But maybe we are already starting a little bit too late.“