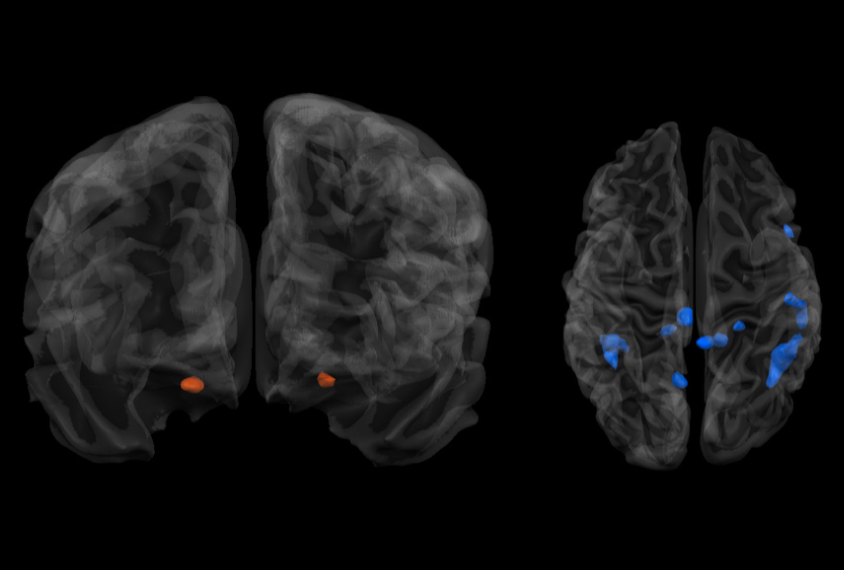 Sniffing around: People with autism engage almost half their brain (right) when they smell the air, suggesting they search for odors even when none exist.

People with autism use different brain regions than typical people do to distinguish between the scents of familiar and unfamiliar individuals. They also use more of their brain to detect odors, according to unpublished results presented today at the 2018 International Society for Autism Research annual meeting in Rotterdam, the Netherlands.

Both typical people and those with autism engage separate brain networks to process so-called ‘social scents’ (those from people) than to process odors from objects, the researchers found. However, the social- and object-scent networks differ between the groups.

People can glean social information from odors, but the information is subconscious. In 2017, researchers found that men with autism respond differently than neurotypical men to sweat from skydivers, which may emit the ‘scent of fear.’ Previous research has found that some people with autism are sensitive to certain scents and that they inhale differently from most people.

The new work is the first to show that an unusual pattern of neural activity underlies social-odor processing in people with autism — and it may help reveal how body odors affect features associated with autism, such as anxiety or social deficits.

Information about these effects might be used to aid autism therapy: A familiar person’s odor in the room might be calming, for example.

“Based on this knowledge, we can try to use odors in a more concrete way in tasks that can be used in the diagnosis and treatment of autism,” says Valentina Parma, who presented the work. Parma is an independent postdoctoral fellow at the International School for Advanced Studies in Trieste, Italy.

In the study, 30 adults with autism and 28 typical ones, aged 25 years on average, took both an odor-identification test and the Autism Diagnostic Observation Schedule, a standard test for autism.

The researchers asked a close friend or relative of the participants to wear a shirt for 12 hours. They cut out the underarms of the shirts and put the cloth in jars. The jars were loaded into a scent-delivery device called an olfactometer.

When typical people smell a scent, brain activity increases in one area: an odor-sensing region called the piriform cortex. By contrast, smells don’t cause an increase in this region in the autism brain. Yet about half the autism brain becomes active in the absence of scent, suggesting that people with autism search for odors when they aren’t there, Parma says.

Parma and her colleagues found that both groups use dedicated brain networks to distinguish the human smell from deodorant — but people with autism engage more regions in each instance.

“It takes more effort for an autistic individual to determine, ‘What is that odor?’” Parma says.

“Again, both groups are able to distinguish common and body odors, but they do that following different neural computations,” Parma says. “And, generally speaking, the autism group is using way more activation.”

The researchers say they would like to investigate how exposure to familiar and unfamiliar odors affects how well autism therapies work.