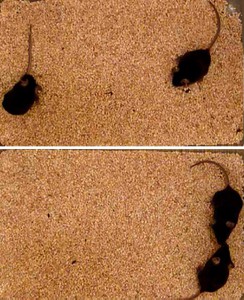 Solitary state: Mice lacking CNTNAP2 (top) do not socialize with other mice in their cage, as controls do (bottom).

Mice missing the autism-linked gene CNTNAP2 have broad defects in their oxytocin system, according to research presented Tuesday at the Society for Neuroscience annual meeting in New Orleans. Treatment with oxytocin alleviates social deficits in these mice.

Oxytocin is often dubbed the ‘love hormone’ because of its role in mother-child and mating bonds and its ability to enhance trust. It is also touted as a promising treatment for autism, although there is mixed evidence of its involvement in the disorder.

This study is the first to identify a problem in the oxytocin system in a mouse model of the disorder.

Last year, researchers reported that mice lacking CNTNAP2 have autism-like features. They show little interest in other mice and obsessively groom themselves, reminiscent of the social deficits and repetitive behaviors seen in individuals with the disorder. When treated with risperidone, which alleviates repetitive behaviors in people with autism, the CNTNAP2 mutant mice groom less.

In the new study, Olga Peñagarikano, assistant researcher in the laboratory of Daniel Geschwind, screened candidate drugs for autism, including oxytocin, in these mice.

The mutant mice treated with oxytocin are as social as controls, she found. But the mice have less oxytocin in the brain than controls do. It is not clear whether this is because their neurons make less oxytocin or because they have fewer oxytocin-producing neurons, says Peñagarikano.

The mice also have more oxytocin receptors in one brain region than controls do.

The results should be interpreted with caution because oxytocin can affect many pathways in the brain, says Emanuel DiCicco-Bloom, professor of neuroscience at Rutgers University in New Jersey, who was not involved with the work. “But with the defined changes in the receptor,” he says, “the case may be argued rather strongly for a specific effect in this case.”

Oxytocin has no effect on the controls. This is consistent with studies showing that oxytocin improves empathy only in people who have some social deficits.

The results suggest that abnormalities in levels of oxytocin could underlie social deficits in people with autism, says Peñagarikano. They also show that the CNTNAP2 mouse can help screen drugs for the disorder.

Correction: This article has been modified from the original. An earlier version reported that the mice have fewer oxytocin receptors in the brain than controls do, when in fact they have more in one brain region.