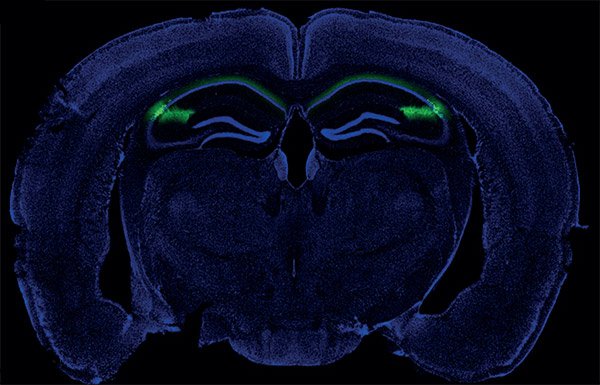 Memory zone: The CA2 region of the hippocampus allows mice to remember if they’ve met another mouse before.

Oxytocin may influence social behavior by priming brain circuits in a region of the hippocampus important for social memory, according to preliminary results presented yesterday at the 2014 Society for Neuroscience annual meeting in Washington, D.C.

Oxytocin, both a hormone and a neurotransmitter, has garnered considerable attention as a chemical mediator of all things warm and fuzzy: Love, trust, emotion and a mother’s bond with her infant are just some examples.

Because of its role in social affiliation, oxytocin has been touted as a possible treatment for autism, but with little data linking it directly to the disorder. What’s more, researchers don’t know much about how it functions in a typical brain.

In a study published last year in Nature, researchers found that oxytocin may prime the activity of neurons in juvenile rats in CA1, an area of the hippocampus involved in spatial memory1. In essence, it takes the brakes off a subgroup of cells called pyramidal neurons, allowing them to fire more readily.

The new findings suggest that later in development, oxytocin acts directly on pyramidal neurons in a different part of the hippocampus.

“The same biological devices or tricks are being remapped in a different way onto a different region,” says lead investigator Richard Tsien, chair of physiology and neuroscience at New York University.

The findings were a complete surprise. Natasha Tirko, a graduate student in Tsien’s lab, says she was initially excited to see what happened to adult mice when she blocked oxytocin’s activity in the region highlighted by the juvenile study. She found that nothing happens.

Soon after, the first antibody that distinguishes oxytocin receptors from those for the closely related hormone vasopressin became available. Using this antibody, Tirko found that in adult mice, oxytocin receptors cluster in the CA2 region, rather than the CA1, in the hippocampus. The CA2 is thought to be involved in social memory, such as remembering a familiar face.

Earlier this year, another team developed a technique that can shut off pyramidal neurons in the CA2 using beams of light. This blocks the mice’s social memory: The mice do not remember having met another mouse before2.

In the new study, Tirko found that the neurons that produce oxytocin project into this social region of the hippocampus in adult mice. Once there, oxytocin directly boosts the activity of the pyramidal neurons, which mediate social memory.

“This is a really important region in social processing,” says Tsien. “We think the fact that oxytocin receptors are bound there could be a very interesting clue to how oxytocin brings about its effects on social behavior.”