‘Social brain’ activity may not differ in some autistic people 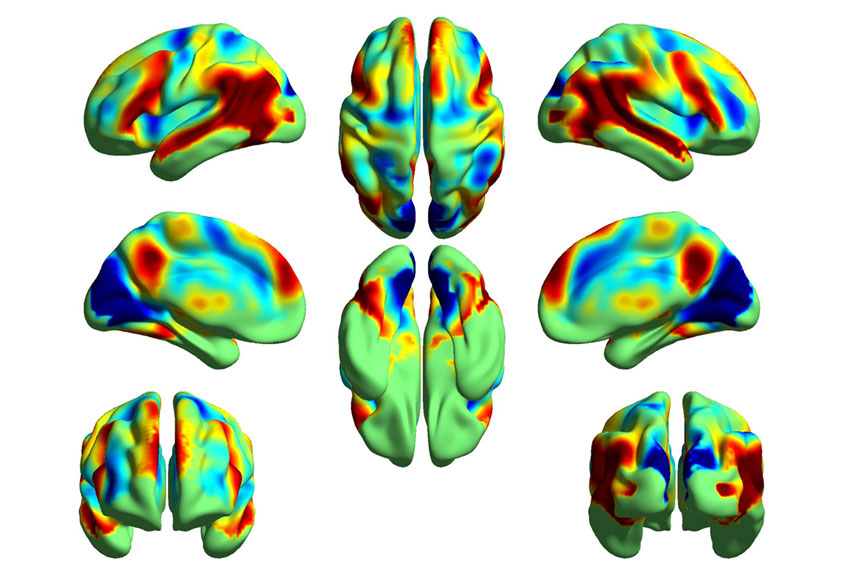 Lit up: People with autism perform similarly to typical people on a task of their ability to infer others’ intentions.

People with autism may have patterns of brain activity similar to those in typical people when interpreting social interactions, according to the largest study of its kind1.

They also perform as well as typical people do on a test of intuiting others’ mental states, the study found.

Both results contradict those from smaller studies that used similar methods: Those studies supported the widespread notions that autistic people’s brains respond differently than those of typical people in social situations and that they struggle to infer others’ thoughts.

The new findings should not be interpreted as evidence against these ideas, however, says Andreas Meyer-Lindenberg, director of the Central Institute of Mental Health at the University of Heidelberg in Mannheim, Germany, who led the work. It is more likely that people on the spectrum vary widely in their ability to read others’ mental states, he says, and in a large study these individual differences may cancel each other out.

Other researchers echo this sentiment, saying the results do not invalidate the previous findings. Rather, they provide “food for thought,” says Ralph-Axel Müller, professor of psychology at San Diego State University in California, who was not involved in the study.

“I’m really happy that they published this,” Müller says. “Null findings are as important and thought-provoking as seemingly significant findings that rock the world.”

Meyer-Lindenberg and his colleagues scanned brain activity in 151 autistic and 123 typical boys and men, and in 54 autistic and 66 typical girls and women, ranging in age from 7 to 31 years. They evaluated the participants for autism at one of six centers in Europe as part of the Longitudinal European Autism Project, a multi-country initiative to find biomarkers for autism.

While in the scanner, the participants watched a cartoon of a small blue triangle and a large red triangle. They pressed a button to indicate whether the shapes were floating randomly across the screen or whether they were engaged in a mock social interaction, such as chasing each other or tricking each other. After the scan, the researchers asked the participants to narrate what had happened in each video.

They were looking to assess the participants’ activity in brain regions involved in social communication — collectively called the social brain — and their ‘theory of mind,’ or ability to interpret others’ thoughts and beliefs.

Key parts of the social brain are activated in all the participants as they watch the videos, the researchers found. These areas include the dorsomedial prefrontal cortex, which is thought to be critical for theory of mind; and the posterior superior temporal sulcus, which is thought to be involved in processing social stimuli and biological motion. The results were published 22 February in Molecular Autism.

On average, people with and without autism performed similarly on the task, and the researchers found no difference in brain activation between the two groups.

“Those results were quite surprising,” says Meyer-Lindenberg.

However, he and others say there may still be a difference in brain activity between autistic and typical people, but that the difference may be more complex than whether or how much particular regions of the social brain light up.

Tricky triangles: In one task, participants have to deduce whether shapes are floating randomly across the screen or are engaged in a mock social interaction.

Also, a single task may not be enough to reveal a difference in either performance or brain activity, says Uta Frith, emeritus professor of cognitive development at University College London in the United Kingdom. That’s because factors besides social cognition, such as how well a person understands the task or whether they get distracted, can affect how well they do, she says. (Frith was not involved in the new work, but she helped design the cartoon task it used.)

Frith also notes that the study is large, and so patterns of difference from subgroups of autism may overlap and obscure one another. “Normally when you have more people [in a study], you have less noise,” she says. “I think the heterogenous nature of autistic diagnoses at this time is actually sort of adding more noise.”

One explanation for the study’s findings is that brain regions may synchronize their activation differently in autistic people than in typical people. Other research has found both oversynchronization and undersynchronization in the brains of people with autism.

The researchers plan to probe the data for differences in synchronization within the social brain and in other brain areas. They also plan to assess whether specific genetic or behavioral features in participants with autism align with differences in processing social interactions.