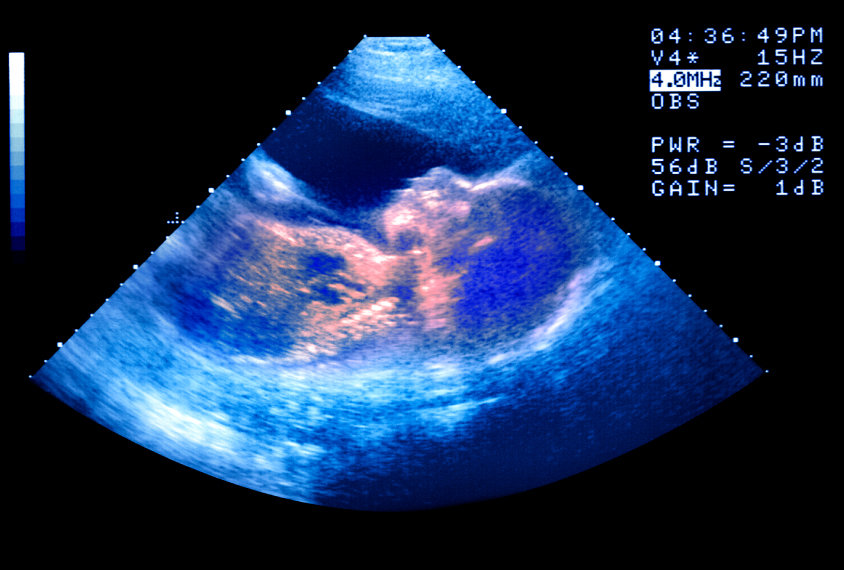 Head start: A fetus’ rate of head growth might serve as a proxy for early neurodevelopment.

Sluggish fetal head growth toward the end of the second trimester foretells poor performance on tests of cognition, language and fine motor skills at age 2, according to a new international study.

By the time a child shows developmental delays, which are common in autism, “a lot of other things have already happened” to put her on that track, says Hao Huang, associate professor of radiology at the University of Pennsylvania in Philadelphia, who was not involved in the study.

If clinicians could predict such delays in advance, they could start behavioral interventions early, during the period when a child’s brain is most responsive to treatment, he says.

The new study offers a step toward that goal, identifying a potential biomarker of atypical development in routine ultrasound scans taken at 20 to 25 weeks of gestation. Researchers analyzed the scans — performed more frequently than usual during 3,598 pregnancies at six international sites — to measure how fetal head circumference changed over time.

“[Change in] head circumference is a very nice proxy of growth, particularly brain growth,” says study investigator José Villar, professor of perinatal medicine at the University of Oxford in the United Kingdom.

Fetal head growth follows one of five paths, Villar and his colleagues found. Each path is associated with a different outcome on cognitive and behavioral tests when the child is 2 years old.

A single measure of slow growth on an ultrasound, within the standard range, shouldn’t concern parents, Villar says. But studying this 20- to 25-week window may help researchers understand how prenatal development shapes later behaviors, he says. “The early measures have implications for long-term consequences.”

The pregnant women in the study lived in Brazil, Kenya, Pakistan, South Africa, Thailand and the United Kingdom. They joined the study after coming into one of the team’s clinics for prenatal care and receiving their first fetal ultrasound scan before 14 weeks’ gestation.

During each scan, a technician measured the fetus’ head circumference using a standard method. Subsequent scans took place approximately every five weeks, and most participants underwent at least three scans. The researchers also tracked the women’s ages, education levels, history of smoking and other demographic information.

The team evaluated the children’s development at age 2 using a series of tests: the INTERGROWTH-21ST Neurodevelopmental Assessment for cognition, language, behavior, and fine and gross motor skills; the Child Behavior Checklist for attentional problems and emotional reactivity; and the Cardiff Visual Acuity and Contrast Sensitivity tests for vision.

Villar and his colleagues also compared the fetal head measurements they collected with the international standard for typical development. Fetuses with atypical growth fell into one of four groups, a statistical analysis revealed. 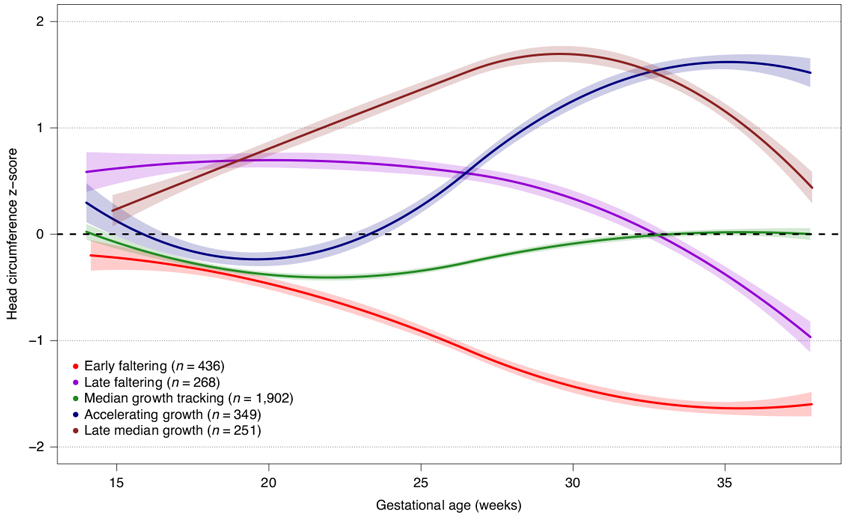 Growth curves: Change in fetal head size falls into five patterns of development, according to the new study.

Compared with children who had fast or typical rates of prenatal head growth, those in the “early faltering” group were more likely to have cognitive and language difficulties at the age of 2, the researchers found. These children were also more likely to have vision problems and poor fine motor skills.

The findings were published in March in Nature Medicine.

Although the researchers controlled for many factors that could explain differences in development, such as maternal health, education and socioeconomic status, they did not control for geographic location, says Tonya White, associate professor of child and adolescent psychiatry at Erasmus University in Rotterdam, the Netherlands, who was not involved in the study.

“What if you show, for example, that the “early faltering” [fetuses] are related to one specific site?” she says. That would suggest that differences in developmental outcomes are actually linked to genetic or environmental factors rather than to the rate of fetal head growth per se.

The group has considered location previously, Villar says. “When health, nutrition and medical care are adequate” — as they were for the women in the new study — there is less variability across locations than within a single location. As a result, controlling for location can introduce errors into the analysis, he says.

Still, more demographic information about the pregnant women would help confirm whether the researchers are “comparing apples with apples in the different groups,” White says. For example, she notes, “what does maternal education mean in Pakistan, compared to Oxford or Nairobi?”

The question of what might cause a fetus to start down one developmental trajectory versus another also remains unanswered, she says.

It’s something Villar and his colleagues plan to look into: They collected blood samples from the mothers and infants at birth and are evaluating whether any other biomarkers in those samples might explain the growth patterns they observed at 20 to 25 weeks of gestation.