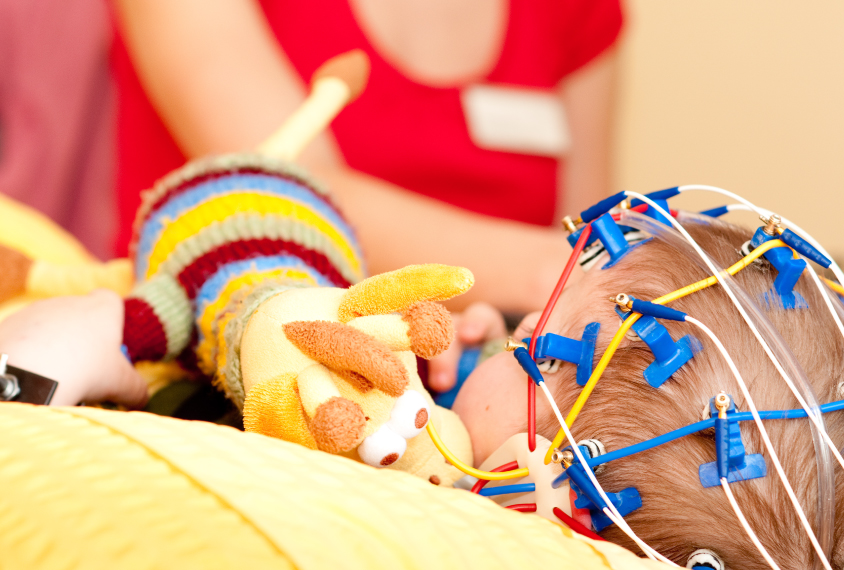 Activity monitor: A particular brain-wave pattern may augur autism in a toddler with tuberous sclerosis.

Certain patterns of electrical activity in the brain may signal autism in children with tuberous sclerosis complex (TSC), a related genetic condition. Toddlers who have both TSC and autism have brain waves that are unusually out of sync across hemispheres, a new study suggests1.

The study offers a potential marker for autism well before traditional diagnostic tests would pick up the condition.

The oscillation speed of certain brain waves, as recorded by electroencephalography (EEG), also tracks with cognitive ability in children who have TSC, regardless of autism status.

“We were able to identify, in the first two years of life, very robust EEG markers of both cognitive impairment and autism in TSC,” says lead researcher Shafali Jeste, associate professor of psychiatry, pediatrics and neurology at the University of California, Los Angeles.

TSC is often diagnosed before birth or in early infancy. Most children with TSC also have epilepsy, and roughly half have autism. Predicting which babies will be diagnosed with autism is important for getting therapy to those most likely to need it.

Unlike children with TSC alone, those with both TSC and autism show social-communication difficulties in their first year of life2. They also show a decline in nonverbal intelligence between the ages of 1 and 3 years. Researchers have been looking for objective measures of some of these early signs of autism.

“Having something that we can objectively measure for individuals at risk [of autism] has really been lacking,” says Darcy Krueger, director of the Tuberous Sclerosis Clinic at Cincinnati Children’s Hospital Medical Center in Ohio, who was not involved in the study. “This is addressing a primary need within the field as a whole.”

Jeste and her colleagues used EEG to measure the brain activity of 35 children with TSC and 20 typical children at ages 12 and 24 months as the children sat in their caregivers’ laps watching a research assistant blow bubbles. The researchers focused on alpha waves — low-frequency electrical signals produced by the resting brain.

At 12 months of age, infants with TSC and controls have comparable peak oscillation speeds, the team found. But at 24 months, children with TSC have slower alpha waves than typical children do.

Oscillation speed at 24 months tracks with later cognitive function, the researchers found; 2-year-olds with higher peak alpha frequencies scored higher on tests of cognitive function at age 3 than the other children.

Jeste and her colleagues also measured the synchronization of alpha waves between brain regions in different hemispheres. At 24 months, they found, synchrony is lower in the children with TSC later diagnosed with autism than in those with TSC alone.

“It’s a really nice, technically well-done study,” says Peter Davis, a neurologist at Boston Children’s Hospital who was not involved in the study. “They confirm that kids who later have autism have differences that you can see very early on in life.”

The results are consistent with the theory that disrupted brain connectivity and weak long-range connections underlie autism.

Oscillations between brain hemispheres are also less synchronized in 1-year-olds with TSC than they are in controls, suggesting that TSC by itself is associated with weak connections between hemispheres. The findings appeared online in August in Autism Research.

Given the study’s small sample size and overlap between groups, however, it is not yet possible to forecast the developmental trajectory of individual children. “It’s still not quite at a predictive level,” Davis says. “You can’t take a kid who comes in and do this analysis and say, ‘Oh they’re going to develop autism.’”

It’s also not clear whether the pattern extends to autistic children who do not have TSC.

Jeste and her colleagues are trying to identify EEG biomarkers of autism in children younger than 1 year. “The earlier we can identify those markers, the earlier we can start monitoring them more closely, and even recommending intervention,” she says.