Siblings of children with autism see and hear differently 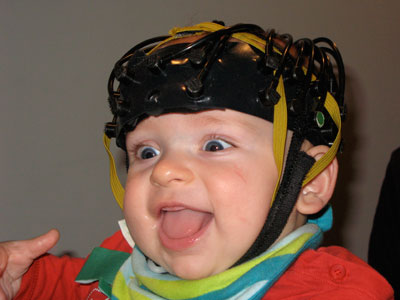 Baby brains: This helmet-like device shows that children with high autism risk respond less to social stimuli than controls do.

Three new studies published in March suggest that some infants who have a high risk of developing autism show early differences in brain responses to sight and sound.

The studies focused on so-called baby sibs, or younger siblings of children with autism, who have a 20-fold increased risk of developing the disorder compared with the general population, making them an ideal group in which to study early risk factors of autism.

The first study, published 20 March in the American Journal of Psychiatry, found that 7-month-old baby sibs who later meet the diagnostic criteria for autism show a small but significant delay in looking at a visual test on a computer compared with typically developing babies1. The researchers screened these babies at 24 months for autism.

The researchers, led by Joseph Piven, director of the Carolina Institute for Developmental Disabilities at the University of North Carolina, Chapel Hill, found that these infants also have differences in their white matter — the neural wiring that transmits information in the brain, the study found.

“I think it’s a fantastic paper,” says Kevin Pelphrey, director of the Center for Translational Developmental Neuroscience at Yale University, who was not involved in the study. “One of the things it does that several of the other infant sibling studies do not is get the 24-month outcome so they are able to actually inform us about how the babies turned out and what kind of diagnosis they had.”

In the second study, published 13 March in the Proceedings of The Royal Society B: Biological Sciences, U.K. researchers found that 4- to 6-month-old baby sibs show less brain activity in response to social sights and sounds than low-risk babies do2.

The third study, published in March in Frontiers in Human Neuroscience, found early differences in brain activity between 7-month-old baby sibs and low-risk infants in response to watching faces3. The researchers have not yet determined which children will go on to develop autism in these latter studies.

The new findings add to growing evidence that signs of the disorder are detectable early in infancy, well before an official diagnosis can be made.

In Piven’s study, 97 7-month-old infants underwent visual testing and brain imaging. At 24 months, the researchers assessed the babies with the Autism Diagnostic Observation Scale, a gold standard for classifying autism. The study is part of the Infant Brain Imaging Study, a network of four American institutions studying baby sibs.

Of the 57 baby sibs in the study, 16 scored within the autism range, though the assessment doesn’t mean these children have the disorder.

“Some say you can’t diagnose until 36 months,” says Piven. “Some might not meet criteria at 36 months.” The researchers plan to confirm the diagnosis in the babies between 36 and 60 months.

In the study, the researchers used a visual test called the overlap condition, in which the babies watch a monitor with a central image. A second image appears while the first is still on the screen. The baby sibs who don’t go on to develop autism and the typical infants are about 40 to 50 milliseconds faster at switching their gaze to the new image, respectively, than the baby sibs who later meet autism criteria.

Using diffusion tensor imaging, or DTI, an indirect measure of the brain’s white matter tracts, the researchers evaluated white fiber bundles. They focused on the splenium, a part of the brain that is connected to areas associated with visual and sensorimotor processing and has previously been linked to autism4.

Baby sibs who later meet criteria for autism have spleniums with minute differences in their structure than all infants who do not develop autism, though it’s unclear whether the difference lies in the fibers’ density or their quality. Problems with the splenium may explain slower changes in gaze — the white matter microstructure correlates directly with performance on the visual task.

It’s possible that these early problems contribute to later deficits in joint attention — interacting with others and following their gaze, Piven says.

Other researchers caution that the results need to be replicated with more imaging techniques.

Other methods, such as probabilistic or multi-tensor tractography, measure neural tracts with “much better resolution in these maps and bring them closer to biological reality,” says Mayada Elsabbagh, assistant professor of psychiatry at McGill University in Montreal, who was not involved in the study.

The new findings add to research that Elsabbagh published last year showing that brain activity in response to gaze can predict which infants will go on to develop autism. Unlike controls, babies who are later diagnosed with autism show little difference in brain response to images of faces looking toward them and those looking away.

The other two studies used a technique called functional near-infrared spectroscopy (fNIRS), in which a helmet-like device on a baby’s head detects brain activity. As the oxygen levels in blood decrease, fNIRS detects the blood’s color change, allowing scientists to see in which regions the brain is using more energy.

In the U.K. study, Mark Johnson and his colleagues looked at 16 typical infants, and 18 baby sibs from the British Autism Study of Infant Siblings network.

Wearing the fNIRS device on their heads, the babies watched social videos with actors moving their eyes left or right or playing hand games, such as peek-a-boo. They also listened to human sounds, such as yawning, and non-human noises, such as rattling.

“Even at 4 or 5 months, we’re seeing this early tuning up of parts of the [brain’s] cortex for these social stimuli, both auditory and visually,” says lead investigator Johnson, director of the Centre for Brain and Cognitive Development of Birkbeck, University of London.

“The obvious next steps are to follow up on these babies when they’re 3 years old to see which [of them] go on to a later diagnosis of autism,” he says.

The most striking finding from that study is that, unlike controls, the baby sibs show no significant difference in blood flow when they look at their mother versus a smiling stranger.