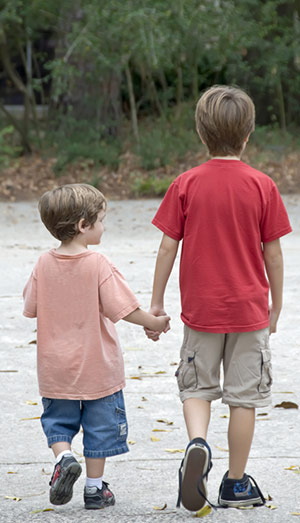 Family ties: Studying autism risk among siblings provides one way to assess the role that genes play in autism.

Children who have older siblings with autism are seven times more likely to receive autism diagnoses themselves, according to a study published 19 August in JAMA Pediatrics1.

The results, based on a population-wide study in Denmark, show that the risk is higher for full siblings than for those who share only one parent, underscoring genetics’ contribution to autism.

The risk is higher for half-siblings who share a mother than for those who share a father, suggesting that the prenatal environment or environmental exposures during pregnancy may also contribute to autism.

“[Autism] has many potential causes and our study supports the notion of many etiologic pathways —  both through family history and prenatal fetal environments,” says lead investigator Erik Parner, professor of biostatistics at Aarhus University in Denmark.

The heritability of autism, and other disorders, is traditionally studied by scrutinizing twins. Identical twins, who are more genetically similar than fraternal twins, are also more likely to share an autism diagnosis, suggesting that autism is at least partly genetic2, 3, 4.

But twins are relatively rare, and twin studies are often limited by a small sample size.

Studying autism risk among siblings provides another way to assess the role that genes play in autism. A study of 5,000 families published earlier this year found that full siblings of children with autism are twice as likely to receive an autism diagnosis as half-siblings, reinforcing the findings of prior twin studies5.

The study was limited, however, by the fact that it only included children listed in the Interactive Autism Network, a voluntary registry of American families that have at least one child with autism.That raises the possibility of selection bias: The families that choose to enroll in the network may differ in important ways from the broader population, for example, and may not reflect population trends.

The new study is much larger, investigating autism risk across an entire population. It takes advantage of Denmark’s mandatory national registries, which contain health and demographic information about all of its citizens.

Its sample size of 1.5 million children is “over the top — it’s fantastic,” says John Constantino, professor of psychiatry and pediatrics at Washington University in St. Louis. “It’s a very important study.”

All live births are recorded in the Danish Medical Birth Registry. The researchers combed through the registry records of all children born between January 1980 and December 2004 — a period encompassing more than 1.5 million live births. They identified first- and second-born children from families in which mothers or fathers had at least two biological children.

They identified 464,057 sibling pairs who share a mother and 484,189 who share a father. (These two groups overlap considerably, as they include many sets of full siblings, who share both parents.)

The researchers then examined the Danish Psychiatric Central Register to pinpoint the children diagnosed with an autism spectrum disorder.

Using this information, the scientists calculated ‘recurrence risk’ for autism — the odds that a younger sibling of a child with autism would also receive an autism diagnosis.

Overall, the researchers discovered that children who have an older sibling with autism are 6.9 times more likely than other children to receive an autism diagnosis themselves. Full siblings are about 7.5 times more likely to be diagnosed with the disorder and half-siblings who share a mother are about 2.4 times more so than the general population.

In contrast, children who share only a biological father with an older sibling who has autism do not show a statistically significant increase in autism risk.

In general, these findings are consistent with those of previous studies, Constantino says. “There’s a lot of convergence across these studies that supports a very high level of heritability for autism.”

The elevated risk for half-siblings who share a mother highlights the importance of the prenatal environment in autism risk.

“There might be factors unique to the mother and her pregnancy that could also cause some [autism] cases,” says Therese Grønborg, a doctoral student at Aarhus University who did the work.

For instance, women with autoimmune disorders are more likely to have a child with autism, perhaps because some of the antibodies present in these diseases cross the placental barrier and interfere with fetal brain development.

The researchers also found that the recurrence risk remained constant over the three decades covered by the study, even as the prevalence of autism has increased.

That finding is likely to spark debate among autism researchers, says Lonnie Zwaigenbaum, professor of pediatrics at the University of Alberta in Canada, because the recurrence rate in the new study is substantially lower than that reported in two recent North American studies6, 7.

“This is a paper that probably reports the lowest relative risk of autism in siblings that has ever been reported,” Zwaigenbaum says.

The lower figure may be due to the fact that the new study assessed the whole population rather than the members of a volunteer registry. Also, the researchers in this study did not confirm autism diagnoses, but rather relied on medical records.

The diagnostic criteria and medical systems in Denmark and the U.S. may also be different enough to affect the results.

“I do think the paper will generate some discussion about what’s the appropriate [recurrence] rate to cite to families,” says Zwaigenbaum. “It will make me think about giving more of a range.”