Short chromosome caps may up autism risk in families 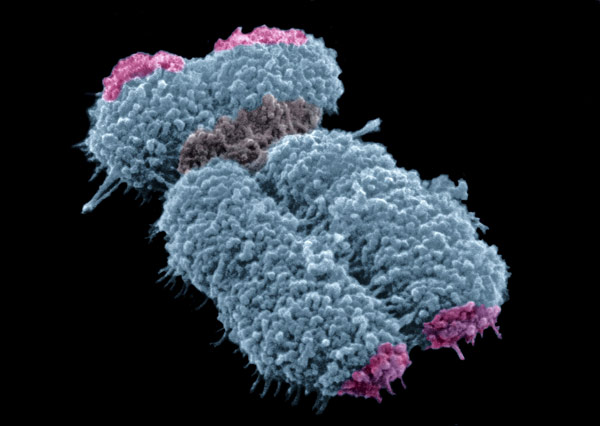 ©SPL/Science Source Curtailed caps: A mix of genetic and environmental factors may truncate telomeres in families affected by autism.

Telomeres, the structures at the tips of chromosomes, tend to be unusually short in people with autism and their immediate family members.

The findings, published in the July issue of the Journal of the American Academy of Child and Adolescent Psychiatry, are the first to show that the infant siblings of children with autism have shortened telomeres1.

The results may help to explain why these so-called ‘baby sibs’ have 20 times the average risk of autism, says lead investigator Charles Nelson, professor of pediatrics at Harvard Medical School. Because the results are preliminary, however, some researchers caution against interpreting them as relevant to all families affected by autism.

Telomeres protect the ends of chromosomes from degrading as dividing cells copy their DNA. The caps shorten with age, and acceleration of the shrinkage tracks with a variety of medical problems, including cancer, heart disease, depression and schizophrenia.

Telomere length is highly heritable, but external factors such as cigarette smoking and psychological stress can also affect it. In one 2004 study, researchers found truncated telomeres in women who care for children with chronic health conditions, including autism, and who report high levels of stress2.

Whether telomere shortening in children with autism and their family members stems from genes, the environment, or a combination is not yet known.

“It’s a safe bet that at least part of the findings are due to systemic family stress,” says Elissa Epel, associate professor of psychiatry at the University of California, San Francisco, “but we can’t rule out the possibility that there are genetics at play.” Epel led the 2004 study, but was not involved in the current work.

In a 2012 study, Nelson and his colleagues found that children raised in Romanian orphanages have shortened telomeres3. “That argued that there’s a biological toll of growing up in such adverse circumstances,” Nelson says.

Nelson then wondered if telomere length is altered in baby sibs, because he suspected that growing up with a sibling with autism might be stressful. He discussed his hunch with Elizabeth Blackburn, who earned a Nobel Prize in 2009 for discovering how telomeres function. “She thought it was a great idea,” Nelson says.

Nelson and his colleagues analyzed DNA in saliva samples from 28 baby sibs and 35 infants with an older sibling but no family history of autism. They also collected samples from the babies’ parents and siblings.

They found that telomeres are about 20 percent smaller on average in the families with a child who has autism than in the unaffected families. They saw the shortened caps in children with autism as well as in their mothers and infant siblings. Fathers of children with autism also appear to have shortened chromosome caps, though this difference is not statistically significant.

The findings jibe with a 2014 study showing that children with autism have shorter telomeres than do their typically developing peers4.

Several independent geneticists note that the group differences in the new study are small and need to be replicated in a larger sample of families.

“We don’t know what the significance of the shortening is,” says Mary Armanios, director of the Telomere Center at Johns Hopkins University in Baltimore, Maryland. “It would be interesting to know whether the telomeres shorten at a different rate or to a different extent over time.”

If other studies confirm that telomeres are shorter in these individuals, the next question is why. One possible answer is psychological stress. “We do know from plenty of research that these families are under more stress than families with typical children,” Epel says.

Genetics may also contribute. For instance, some autism-linked genetic variants regulate the structure and repair of DNA — two processes important for telomere function. And other work has implicated oxidative stress, an excess of highly reactive compounds called free radicals. People with autism and their parents seem to have increased oxidative stress, which may trigger telomere erosion5.

Whatever the cause of the shortening, having stumpy telomeres might put families at increased risk for heart disease and other health conditions associated with rapid telomere shrinkage, says Stacy Drury, associate professor of psychiatry and behavioral sciences at Tulane University in New Orleans. Drury was not involved in the study, but wrote a commentary accompanying the paper6.