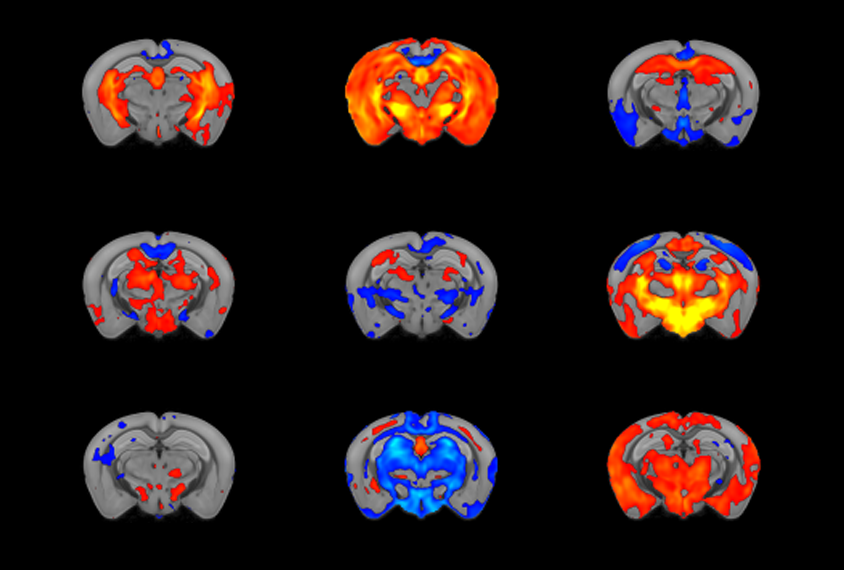 Similar scans: Mouse models of autism can be clustered based on differences in their neuroanatomy.

Subgrouping mouse models of autism by brain structure or connectivity can reveal other commonalities among people who have the condition, according to two new unpublished studies. Researchers presented the findings last week at Neuroscience 2022 in San Diego, California.

Autism’s heterogeneity complicates its study. Biomarkers evident within one subgroup may be diluted across the broader autistic population, for example. And clinical trials that succeed for one group can fail if they don’t work for the majority, says Jacob Ellegood, a research associate at the Mouse Imaging Centre in Toronto, Canada, who presented findings at the conference.

That challenge makes the identification of autism subgroups — sets of people who may respond similarly to treatments, for example — an appealing goal, he says. And how brain structure compares across different mouse models of autism offers one way to search for such subtypes.

In new work presented on 13 November, Ellegood and his colleagues linked nine mouse models of rare genetic conditions to better-known forms of autism, based on neuroanatomy. Similar pathways may underlie these different genetic conditions, Ellegood says.

“There isn’t a single signature of autism in the brain,” says study investigator Marco Pagani, a research fellow at the Italian Institute of Technology in Roverto, Italy, and the Child Mind Institute in New York City, who presented the connectivity work on 16 November. (Pagani described his findings in a video for Spectrum.)

Pagani and his colleagues collected resting-state functional MRI scans in 10 to 20 mice for each of their 19 models.

Pagani and his colleagues identified 166 autistic participants with the hyperconnected brain signature and 79 with the under-connected signature.

Participants within each group had similar overall scores on measures of restricted and repetitive behaviors, according to the Autism Diagnostic Observation Schedule. But people with hyperconnectivity had significantly higher scores — indicating more severe difficulties — on the social affective component.

Autism-linked genes were more highly expressed in brain areas that have atypical connectivity, an analysis of postmortem brain tissue from autistic people revealed, suggesting that these genes might hold clues about the biology behind the different subtypes, Pagani says.

Ellegood and his colleagues performed structural MRI scans of 150 different mouse models of autism, evaluating how different regions of the animals’ brains vary in volume. Then they clustered the models, including the nine new ones, into groups with similar neuroanatomy, using an algorithm that considers both the relative and absolute volume of each brain region.

“The main goal is to not necessarily fully categorize autism, but at least link models together that wouldn’t otherwise be linked together,” Ellegood says.

The clusters revealed relationships across autism-linked genes. For example, mice with mutations in the gene YPEL2, which is also called DiGeorge syndrome-related protein, had neuroanatomy similar to that of mice with a deletion of the 22q11.2 chromosomal region, which model DiGeorge syndrome.

Ellegood and his colleagues aim to continue scanning the brains of every mouse model of autism.

And they are performing a similar analysis on structural brain scans from people with idiopathic autism, with the goal of matching participants’ scans to the previously identified mouse clusters. That could help point to molecular pathways that contribute to different forms of idiopathic autism, he says.

Ellegood and Pagani also plan to compare their results to see if they can spot any overlap among their different subgroups. But they may be picking up on different signals, Pagani says.

“Any way that you can refine this heterogeneity is powerful,” Ellegood says. “And hopefully it’ll tell you something.”