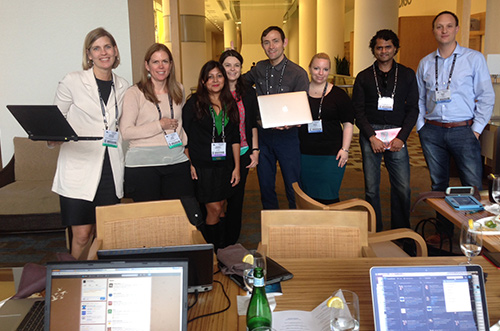 Trending research: Members of the SFARI.org team huddled in the lobby of the Hilton San Diego Bayfront to host a live Q&A over Twitter with scientists and journalists at the conference (pictured) and beyond.

Flying home from the Society for Neuroscience (SfN) 2013 meeting in San Diego provided a welcome respite from the blitz of brain science and SFARI.org activity over the past few days. (For daily updates and highlights from SfN attendees, read the rolling Reactions post.)

There was the SFARI Social on Sunday evening, featuring presentations from postdoctoral fellows, conversations with grantees and mingling on the balcony overlooking Coronado Island well into the night. We also hosted a series of ‘happy-hour brainstorms’ for junior autism researchers. Our live Q & A on Twitter on Tuesday afternoon — which featured a group of more than 50 researchers and journalists from the conference and beyond — garnered a total reach of nearly one million impressions.

All this, to say nothing of trying to get to as many SfN lectures, posters and symposia as possible.

With the wealth of all this information, one thing that became evident is the apparent synthesis of new models and approaches in neuroscience with the established protocols of other disciplines.

“One element that seems to be coming out of many posters and talks is the tremendous power of multilevel approaches,” Jessica Cardin, assistant professor of neurobiology at Yale University, noted in our SfN Reactions, “partially as a result of new tools at each level.”

“There is a lot of data,” she said, “linking alterations in biochemical pathways and cellular mechanisms to deficits in circuit function and behavior by combining new genetic, viral and optical tools.”

Another example of such synergy came up during our Twitter Q&A. Dwayne Godwin, professor of neurobiology at Wake Forest University in Winston-Salem, North Carolina, pointed out that new work, such as that presented by Flora Vaccarino’s lab studying induced pluripotent stem (iPS) cells derived from families with a child with autism, holds the “potential to combine the power of what scientists can do in a dish with the relevant genetic[s].”

I came away from the conference with the sense that new breakthroughs in autism will likely depend on a creative blend of available tools. There are inherent advantages and disadvantages to using animal models versus studying people, to deriving iPS cells versus examining postmortem tissue, to drawing blood versus scanning brains, and so on. It seems researchers are increasingly trying to integrate and balance the limitations and advantages between these approaches, instead of staying firmly in their own wheelhouse.

On a personal note, I found it especially rewarding to meet with some of the students, postdoctoral fellows and junior investigators just breaking into the field. If the creativity and enthusiasm they hold is any bellwether, the future of autism research looks promising indeed.

Here are some of my favorite quotes from the week (add yours in the comments section below):

“Over the past several years, next-generation imaging technologies such as Brainbow have been hugely useful in generating … screensavers.”
– Jeff Lichtman, during his lecture on connectomics, before thoroughly presenting the true power of mapping the brain’s connections.

“How can you hate a pathway? What did a pathway ever do to you?”
– A postdoc during one of our ‘happy-hour brainstorms’ for early-career researchers, on the challenges of dealing with the biases of one’s advisor.

“I think my iPad is suffering from connectopathy.”
– Partha Mitra, on not being able log in to the hotel Wifi during our Twitter Q&A.

Here’s a sampling of some of the conversation from the Twitter Q&A (read the complete transcript here):

What emerging tool from neuroscience do you think will prove to have the biggest impact in understanding autism or neurodevelopment? Why?

Kevin Pelphrey, Yale University: “Many tools are showing great promise. I am particularly excited about techniques to measure gene expression.”

What finding or discovery surprised you this year?

Pelphrey: “The new head-size findings were quite surprising! There goes a finding we thought we had nailed down!”

Will we ever have a brain-imaging diagnostic marker of autism? If so, which most likely to pan out?

Mitra: “My guess is structural imaging using MRI (with a variety of contrasts, including ones not yet tried).”

Pelphrey: “I think we already have biomarkers. But I am biased. In terms of what will pan out in humans: developmental studies of neural circuitry supporting social cognition. We have shown endophenotypic markers. Now we need to study specificity to autism. But we will need to advance beyond infant siblings studies to prove diagnostic validity.”

What’s your favorite animal model for studying neurodevelopmental disorders? Why?

The ‘connectome’ gets a lot of hype. How would mapping every brain connection help us understand autism?

Terri Gilbert, Allen Institute for Brain Science: “Maybe not ‘every connection,’ but basic cabling may tell us something.”