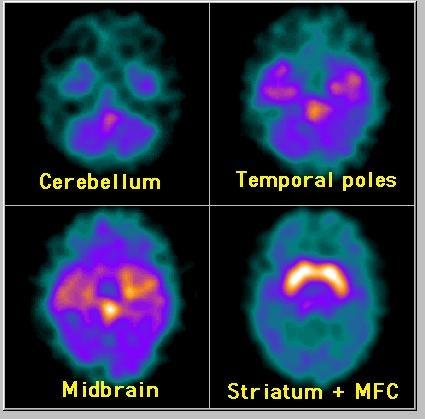 Disease signal: The serotonin receptor SERT is less active in the medial frontal cortex (bottom right) in a 12-year-old child with autism than in controls.

Children with autism show reduced activity of the serotonin transporter ― which helps regulate levels of the neurotransmitter serotonin ― in brain regions that process emotions, according to research published in August1.

Serotonin is a signaling molecule that regulates mood, appetite and sleep. It also plays a role in postnatal brain development by helping neurons connect.

Drugs that target the serotonin transporter, called SERT, have been shown to improve some symptoms of autism by blocking the uptake of serotonin from the spaces between nerve cells, effectively increasing the neurotransmitter’s available levels2. This is the same mechanism underlying several popular marketed drugs such as Prozac and Zoloft.

Led by Ismo Makkonen and his colleagues at Finlandʼs Kuopio University Hospital, the researchers used single photo emission computed tomography (SPECT) to look at the activity of serotonin and dopamine transporters in the brains of 15 children with autism.

The serotonin transporter is less active particularly in the medial frontal cortex, a brain region involved in processing emotions and interpreting eye gaze, the researchers found. The transporter’s reduced activity may be the result of fewer serotonin neurons in people with autism, Makkonen says.

“This study adds some fuel to the serotonin story,” says Chris McDougle, a Raymond E. Houk Professor of Psychiatry at Indiana University in Indianapolis. “We should really move more aggressively in looking at [positron emission tomography] imaging studies in adults.”

“What [Chugani] saw is very much complementary to what the Makkonen group is showing,” says Christine Hohmann, an associate professor of biology at Morgan State University in Baltimore.

In July, another team reported that PET scans of parents of children with autism also show reduced activity of a serotonin receptor compared with parents of typically developing children4.

But exactly how serotonin is linked to autism, and whether it is a cause or consequence of the disorder, is not yet clear.

“Some of us are frustrated that we havenʼt figured it out yet,” says Ed Cook, a visiting professor of psychiatry at the University of Illinois in Chicago.

Results from genetic studies of the transporter have been mixed: of 12 studies, 7 indicated a link between the SERT gene and autism5.

“If [the disorder] was homogenous, then all the studies would go in one direction,” Cook says. “But they don’t, because we are pulling out different pieces of the autism phenotype from different studies.”

The new study included only 15 children with high-functioning autism, and did not include a typically developing control group because of the radiation risks from imaging. The control group included children with other diagnoses, such as tremors and epilepsy. In the autism group, the researchers also had to statistically account for the effects of sedation on the brain.

The researchers are continuing to study the children, this time measuring the brain during and after a six-month treatment with the SSRI fluoxetine.

Others, such as Hohmann, are studying serotonin deficits in mouse models of autism by introducing toxins to selectively eliminate serotonin neurons in the brains of newborn mouse pups.

Hohmann reported last year that introducing lesions in the medial forebrain bundle, a mouse region analogous to the human medial forebrain cortex ― involved with processing emotions ― leads to autism-like behaviors, such as increased repetitive grooming, in the mice6.

“We are trying to see how closely we can cause this serotonin depletion to alter the developmental profile,” Hohmann says. “[The new study] confirms for me that we are on the right track.”