Activating serotonin receptors in the medial septum, a region along the brain’s midline, reverses social-memory deficits in a mouse model of autism, according to new research.

The results reveal a new mechanism by which serotonin shapes social function and suggest that the chemical messenger’s effects may vary by brain region.

“It is a tour-de-force study,” says Weizhe Hong, associate professor of neurobiology and biological chemistry at the University of California, Los Angeles, who was not involved in the work.

Social memory — a person’s ability to remember who she knows and how — is an essential component of social behavior, and it may be disrupted in people with autism. A region of the hippocampus called dorsal CA2 is linked to social memory, but it was previously unclear how cells in the region receive information about social stimuli in the first place.

The new research traces the source to the medial septum, which relays nerve signals to the hippocampus, and identifies serotonin as a modulator of those signals. Serotonin release enhances sociability in mice and is disrupted in a mouse model of autism, past studies have shown.

Because serotonin has now been linked to multiple aspects of social function, “it seems to me, if you’re interested in autism, this should be a focus,” says lead investigator Robert Malenka, professor of psychiatry and behavioral sciences at Stanford University in California.

Malenka and his colleagues genetically engineered mice so that after being injected with a compound, activated neurons fluoresce red in brain slices viewed under a microscope. They then put the animals in an empty cage or one with a novel mouse or object and, after each situation, counted the number of labeled cells in brain regions known to send signals to CA2. 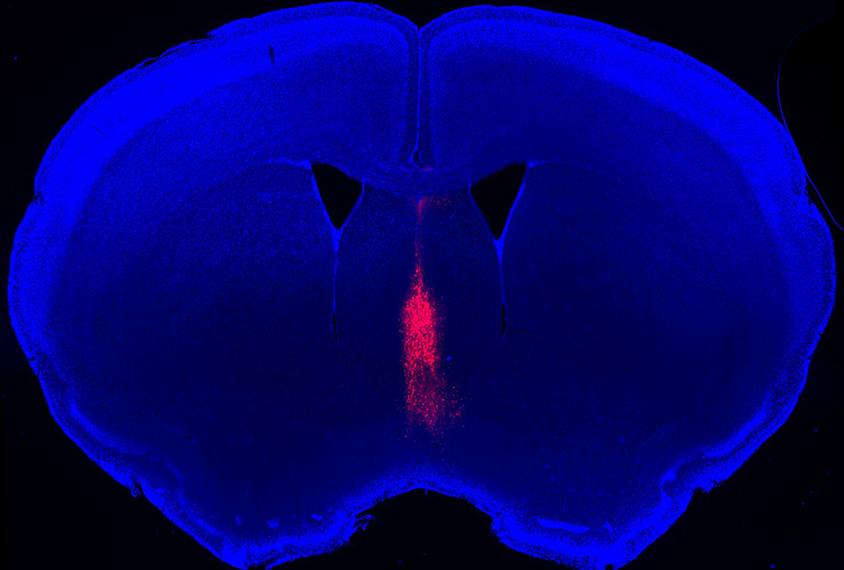 Memory Lane: Inhibiting neuronal activity in mouse medial septum (red) prevents the animals from remembering which mice are familiar and which aren’t.

Neurons in the medial septum in particular showed a spike in red fluorescent cells after an engineered mouse interacted with a novel mouse, suggesting a social memory had formed, the team found.

They then used a strategy called chemogenetics to modulate the activity of these neurons. They engineered a second set of mice so that these neurons produced designer receptors, which bind only to a particular drug. Injecting mice in the medial septum with the drug inhibited the neurons’ activity and caused the animals to lose their usual preference for interacting with a novel mouse over a familiar one.

Using the same chemogenetics strategy, the researchers equipped mice with drug-sensitive receptors that activate the same neurons instead of inhibiting them. Control mice retained social memories for at least 10 minutes after being separated from another animal, but not after two hours. Mice treated with the activating drug, however, preferred the novel mice for at least 24 hours — suggesting that the treatment prolonged their social memory.

Neurons in the medial septum have receptors for both serotonin and the hormone oxytocin. Infusing a mouse’s medial septum with a drug that blocks a specific type of serotonin receptor decreased the activity of neurons in the region and impaired the animal’s performance on a social-memory task, the researchers found. Alternatively, infusing a drug that activates the serotonin receptors enhanced social memory. Drugs that block oxytocin receptors, by contrast, had no effect.

“Everything fits together kind of perfectly,” Malenka says.

The team then infused the serotonin activator, called CP93129, into the medial septum of mice engineered to lack copies of the genes encoding NLGN 1, 2 and 3, which have been implicated in autism. The treatment improved the animals’ social memory but had no effect on their sociability or object-memory deficits, the team found. The findings were published this month in Nature.

Some researchers are unconvinced that the newly identified circuit has direct ties to autism.

“The lack of effects of the serotonergic manipulations of the medial septum on baseline sociability would appear to lessen the relevance of the medial septum-dorsal CA2 pathway to autism,” says George Anderson, senior research scientist in child psychiatry at Yale University. “A major collateral conclusion of the study is that the role of serotonin in social behavior, and in other behaviors relevant to the autism realm, is very complex.”

Malenka and his colleagues agree that the work paints a more complicated picture of serotonin’s role in the brain. For example, previous research from the group showed that the release of serotonin into a different brain region, the nucleus accumbens, can enhance a mouse’s social motivation.

It goes to show “that there isn’t any one conclusion about what serotonin does,” says study investigator Xiaoting Wu, a postdoctoral researcher in Malenka’s lab. Instead, the neurotransmitter seems to be “very much coupled to the brain region it gets released into,” she says. “It can have implications not only for the social motivational deficits, but also for social memory deficits when the serotonin system is dysregulated.”

Moving forward, the team plans to measure gene expression levels in the medial septal neurons that project to CA2 as an unbiased way to identify other neuromodulators that may influence social behavior.