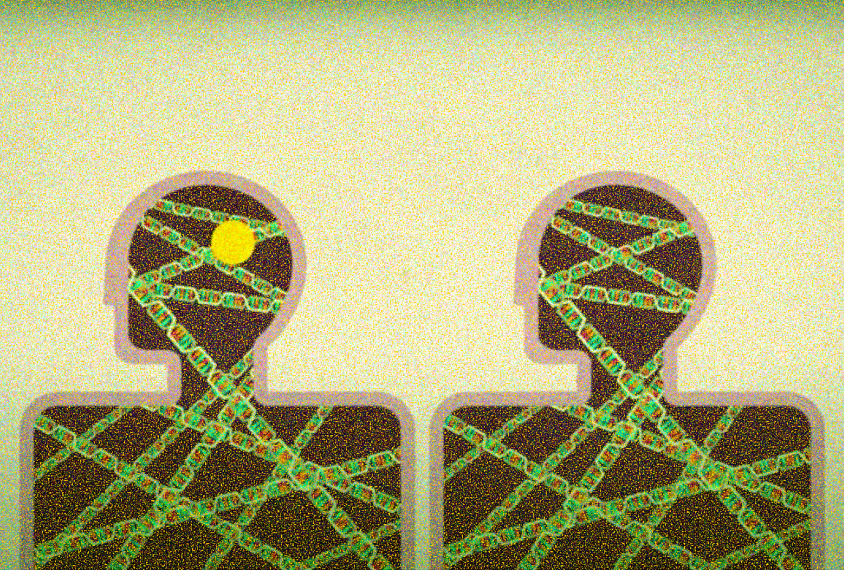 Rare, inherited mutations contribute to a significant proportion of autism cases, helping to explain the heritability of the disorder, according to two new studies published today in Neuron.

Both studies relied on data from sequences of exomes — the protein-coding portion of the genome — to look for mutations that strike both copies of genes.

One of the new studies, led by Mark Daly and his colleagues, predicts that loss-of-function mutations, which prevent production of a functional version of the protein, account for five percent of autism cases1.

The other study, by Christopher Walsh and his colleagues, found that mild mutations in genes that, when missing, cause severe disorders can lead to autism-like symptoms2. These mutations may lead to a partially functional version of the protein, for example, rather than a complete loss.

Previous research has shown that spontaneous, or de novo, mutations — those that occur in the parents’ sperm or eggs — are responsible for 15 to 20 percent of autism cases. The new studies are the first to use exome sequencing to focus on inherited causes of the disorder.

“For the first time, we are articulating mechanisms of inheritance that explain the heritability and are not just spontaneous,” says Daly, associate professor of medicine at Massachusetts General Hospital in Boston.

Daly’s team analyzed data from a number of exome-sequencing projects — totaling more than 900 participants with autism and nearly 900 controls, all of European ancestry — searching specifically for instances in which both copies of a gene contain loss-of-function mutations.

They found that these types of mutations occur twice as often in people with autism than in controls. (They focused their search on rare mutations, those occurring in less than five percent of the population.) Daly reported preliminary findings from the study at the Autism Consortium Research Symposium in Boston in October.

Walsh and his collaborators sequenced the exomes of members of consanguineous families. The parents in these families are closely related, making it easier to detect relevant mutations. A similar study published in September identified a rare form of autism caused by a metabolic disorder.

In some ways, the two new studies are throwbacks to more traditional Mendelian disorders, such as cystic fibrosis. In recessive Mendelian (or recessive single-gene) disorders, a single faulty copy of a gene has little or no effect, but having two faulty copies causes the disorder.

“We have known for a long time that there are specific [single-gene] syndromes associated with autism, such as Rett syndrome and fragile X syndrome,” says Timothy Yu, instructor in neurology at Harvard Medical School and a member of the research team on Walsh’s paper. “Our findings expand that somewhat, showing a whole host of other recessive syndromes.”

In autism, unlike in cystic fibrosis, however, these mutations can affect hundreds of genes, meaning each is individually rare. That makes the mutations difficult to detect in traditional genetic studies.

Daly’s approach for narrowing the hunt is to look specifically for rare loss-of function-mutations in both copies of a gene.

In three families, the researchers found mild mutations in three genes that, when dysfunctional, are known to cause severe metabolic disorders and early death. One of these genes, SYNE1, has previously been linked to autism3.

This flavor of mild mutation — known as hypomorphic mutation  — has been identified in other disorders, but not in autism, says Guy Rouleau, director of the Montreal Neurological Institute and Hospital. “It supports the idea that autism is a very heterogeneous disease, and we need to consider hypomorphic alleles of genes.”

Walsh and his colleagues also screened an additional 163 families that either are consanguineous, have multiple affected children, or both. They looked specifically for mutations in 70 genes linked to brain disorders, and pinpointed a number of homozygous mutations that may contribute to autism.

To determine whether hypomorphic mutations are also at work in autism in non-consanguineous families, they looked at several genes within the Simons Simplex Collection (SSC), a dataset of families that have one child with autism and unaffected parents and siblings. The SSC is funded by the Simons Foundation, SFARI.org’s parent organization.

The researchers found one child in the SSC who has mutations in a gene linked to Cohen syndrome, a condition characterized by a small head, intellectual disability and other symptoms.

Though the child has an autism diagnosis, his medical record reveals that he has some symptoms of Cohen syndrome, including a small head.

It’s not yet clear what proportion of autism cases can be explained by hypomorphic mutations, but it’s likely to be larger than the five percent that Daly’s team calculated for severe loss-of-function mutations. Calculating the exact number will require much larger datasets, however.

This is in part because it’s difficult to determine whether mild mutations are relevant. “Many are benign, many are pathogenic, and we don’t have fantastic predictive algorithms to distinguish the two,” says Yu.

Daly’s and Walsh’s teams both plan to analyze data from more families. For example, Walsh says he wants to collaborate with Daly to look more systematically at recessive mutations in the SSC and other databases.