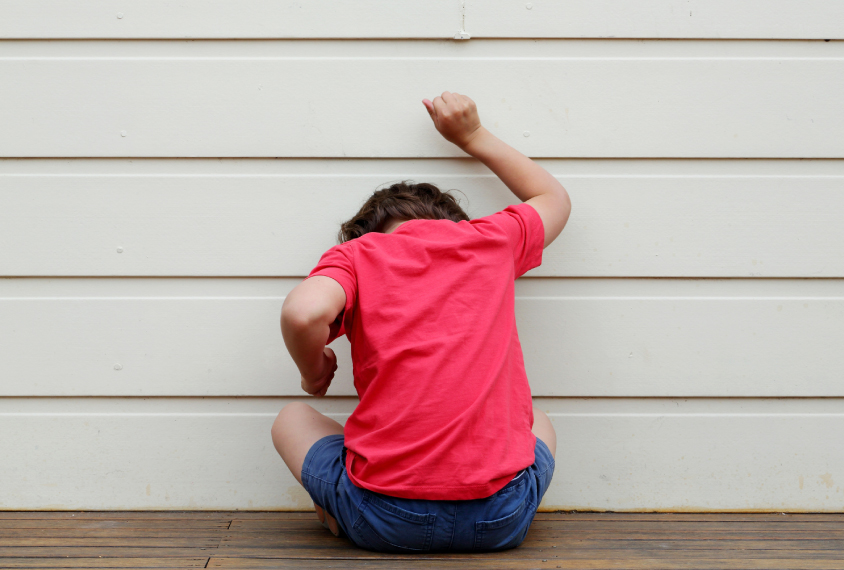 Hard knock: One of the most common forms of self-injury seen in children with autism is "hits self against surface."

Autistic infants who have extreme responses to sights, sounds or textures tend to be the ones who harm themselves as toddlers.

Researchers presented the unpublished results today at the 2019 International Society for Autism Research meeting in Montreal.

“If you see a kid who has one or more of those types of sensory behaviors early on, those are the kids we might want to pay attention to in terms of being at risk for self-injurious behavior,” says Adele Dimian, a postdoctoral fellow in Jason Wolff’s lab at the University of Minnesota in Minneapolis, who presented the findings.

About 25 percent of children with autism injure themselves by banging their heads against hard surfaces, picking at their skin, or biting or pinching themselves. Once these behaviors become a habit, they are difficult to treat, Dimian says.

She and her colleagues looked for factors that predict self-injury. They analyzed data from 149 ‘baby sibs’ — children at an increased risk of autism because they have an older sibling with the condition.

When the children were 12, 24 and 36 months old, their parents completed questionnaires about their child’s sensory responsiveness, sensory seeking and repetitive behaviors; the repetitive behaviors included self-injurious behaviors as well as motor behaviors such as hand-flapping. The researchers also measured the children’s cognitive abilities using a test called the Mullen Scales of Early Learning. They diagnosed 41 of the children with autism by age 3.

About 39 percent of the baby sibs engaged in self-injury at 12 months of age; that figure dropped to about 35 percent at 24 months and 22 percent at 36 months. The baby sibs diagnosed with autism were four times as likely as the others to injure themselves.

About half of the 12-month-old baby sibs acted out one of the most common forms of self-injury: “Hits self against surface.” This behavior disappeared with age in those without autism but persisted in those on the spectrum.

“This [behavior] is something we want to pay attention to, rather than hoping it goes away,” Dimian says.

Other forms of self-injury, such as picking at skin and scratching, intensified with age among those with autism. “As the kids’ motor development becomes more sophisticated, we might see different forms emerging,” Dimian says.

The researchers used a statistical analysis to identify which factors, at 12 months, predict self-injury at 36 months. The strongest predictor is repetitive motor behaviors, which increase the odds of self-injury by 96 percent. Other predictors include a low score on the Mullen, or showing too much or too little response to sensory input.

Dimian says she and her colleagues aim to use this information to model risk of self-injury and help clinicians prevent its onset.