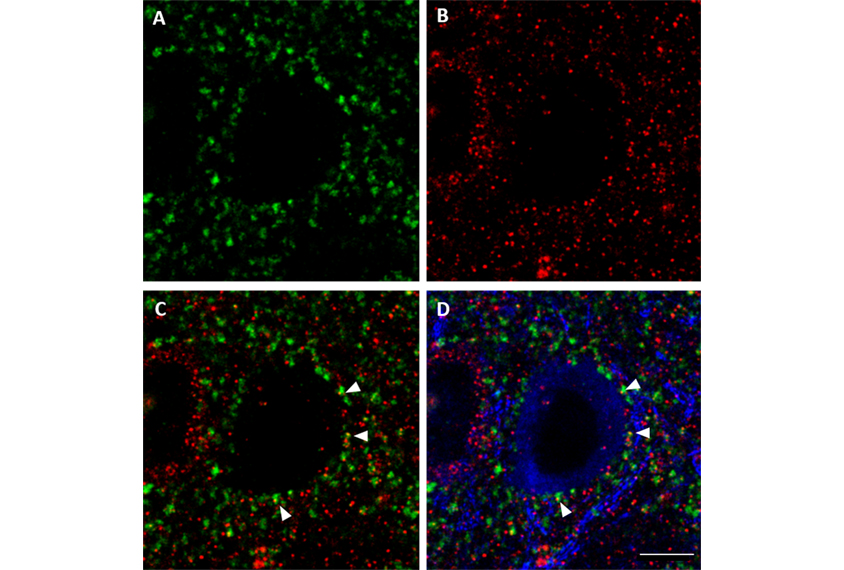 Excitatory drive: The structure of inhibitory neurons in mice missing a copy of the gene SYNGAP1 is typical, but the neurons have reduced excitatory inputs (white arrows).

People and mice with only one working copy of the autism gene SYNGAP1 have trouble processing sights and sounds, and brain cells from the mice show a signaling imbalance, according to two new unpublished studies.

Researchers presented the findings virtually yesterday at the 2021 Society for Neuroscience Global Connectome. (Links to abstracts may work only for registered conference attendees.)

People with a SYNGAP1 mutation often have intellectual disability, epilepsy and autism, as well as pain insensitivity. Previous research has shown that mice missing a copy of the gene have dulled arousal responses, which hampers sensory processing.

Studying these atypical sensory responses could point the way toward reliable biomarkers, researchers say. It might also provide targets for future drug trials.

In one study, the team looked at brain activity in response to sensory stimuli. A biomarker based on brain activity would be particularly valuable to researchers developing and testing treatments, said presenter Maria Isabel Carreno-Munoz, a postdoctoral researcher in the labs of Graziella Di Cristo and Sarah Lippé at CHU Sainte-Justine Research Center in Montreal.

Carreno-Munoz and her colleagues used electroencephalography to record brain activity in wildtype mice and mice missing a copy of SYNGAP1, as well as in 8 people with SYNGAP1 mutations and 27 aged-matched people without the mutations. Specifically, they recorded responses to visual or auditory stimuli — in the form of pictures or recordings — and focused on three brain regions: the visual cortex, the auditory cortex and the posterior parietal cortex.

Mice and people with one functional copy of SYNGAP1 both showed diminished brain responses to the visual stimuli compared with controls but had opposite reactions to sounds: The mice produced larger-amplitude EEG waves than wildtype mice did, whereas the people produced lower-amplitude waves than controls.

A second analysis that took both responses into account revealed distinct neural signatures in the mice and in the people.

In 10 minutes of recording, the team found they could collect enough information to reliably flag mice and people with SYNGAP1 mutations.

These results motivated the researchers to look at the auditory and visual cortices of the SYNGAP1 mice.

“We are trying to understand, at the neuronal level, what is happening in this mouse model,” said Vidya Jadhav, a doctoral student in Jacques Michaud’s and Di Cristo’s labs at CHU Sainte-Justine, who presented this part of the investigation.

Previous work has shown that the excitatory cells in these animals’ brains are altered, Jadhav said. And other studies suggest that an imbalance between excitatory and inhibitory signaling in the brain may underlie some forms of autism and epilepsy.

In the new work, Jadhav and her colleagues focused on inhibitory neurons called parvalbumin (PV) cells. In 2016, they reported that the loss of SYNGAP1 reduced the cells’ branching, among other changes. But in brain slices, they found no significant differences between SYNGAP1 mice and wildtype mice.

However, Jadhav and her colleagues stained the excitatory inputs to the PV cells in the model animals’ visual and auditory cortices and found the inputs were significantly reduced compared with those in wildtype mice. And a series of behavioral tests showed that the model mice had deficits in long-term memory and cognitive flexibility.

To follow up on this work, Jadhav plans to further characterize the memory issues in these mice and correlate them with what she observed in the cultured PV cells.