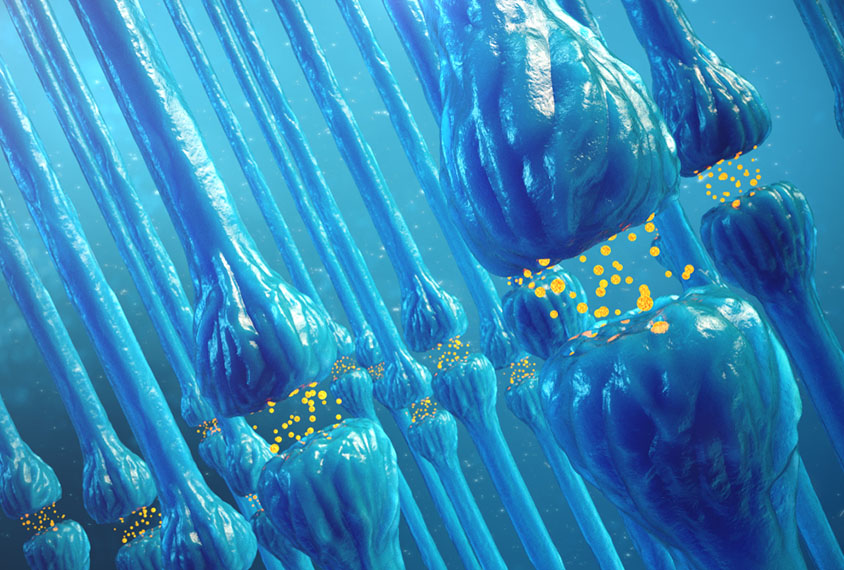 Learning lesson: Shutting down neuronal signaling after a seizure can mitigate effects on the brain.

Seizures early in life render brain circuits incapable of supporting learning during critical periods in development, according to a new mouse study1. The findings add to a body of evidence that suggests early-life seizures exacerbate features of autism.

Treating the mice with a chemical that blocks neuronal signaling mitigates the seizures’ effects. This finding further supports the theory — and also offers hope of a treatment.

“The cool thing is that while there is the message that seizures make neurodevelopmental disorders worse, it looks like this could be reversible,” says co-lead researcher Frances Jensen, professor of neurology at the University of Pennsylvania.

The researchers focused on signals coming into the auditory cortex, a brain region that processes sounds, but the findings may extend to any brain circuit that changes with experience.

“I think the work adds to the literature that neonatal seizures are not benign and should be treated quickly, as they will alter brain development,” says Peyman Golshani, associate professor of neurology at the University of California, Los Angeles, who was not involved in the work.

Learning occurs when certain synapses — connections between neurons — strengthen in response to experience. And these periods of learning are critical for brain development.

The new study suggests that seizures activate synapses prematurely. As a result, all connections are equally responsive; none of them can develop dedicated responses to certain sounds or other stimuli.

The researchers chemically induced seizures in a subset of the mice for three days starting on day 9 after birth. On day 12, the start of a critical auditory learning period, they exposed some of these mice and some controls to 7-kilohertz sounds, which both mice and people can hear.

In brain slices from the same mice, they then used electrical currents to stimulate the parts of the thalamus, the brain region that signals to the auditory cortex, that respond to 7-kilohertz sounds.

The researchers also looked at electrical activity in the brain slices. Slices from mice that had experienced seizures have an unusually high number of active synapses.

Synapses become activated when neurons transport a receptor called AMPA to the junction. The results suggest that blocking AMPA receptors might preserve the mice’s ability to learn.

The team set out to test that theory. They gave mice a drug that blocks AMPA receptors one hour after each seizure. The treated mice did not show the excess of activated synapses and were able to adapt to sound in their second week of life. The results appeared in May in Cell Reports.

“It’s an exciting finding,” says Matthew Anderson, associate professor of neuropathology at Beth Israel Deaconess Medical Center in Boston, who was not involved in the study. “This could impact quite a large proportion of autistic individuals.”

Many people with autism have seizures, and the result is proof, in principle, that a similar approach may modulate the effects of seizures in those people.

However, the compound used in the study is not itself a good clinical candidate because it acts like a sledgehammer, silencing brain signals, says Takao Hensch, co-lead investigator and professor of molecular and cellular biology and neurology at Harvard University. A preferred method might be to prevent AMPA receptors from entering synapses after a seizure.

With additional reporting by Emily Willingham.