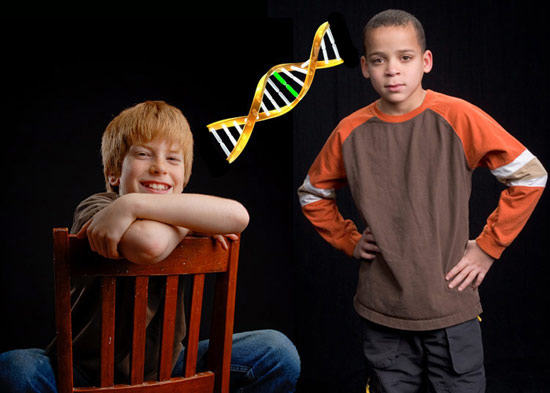 Middle ground: People with Asperger syndrome seem to have some of the same genetic risk factors as those with autism &mdash; and some that are unique.

A genome-wide association study has identified regions harboring risk genes for Asperger syndrome, some of which overlap with those implicated in autism. The study, published in the December issue of Autism Research1, validates three risk regions for the syndrome identified by Finnish researchers in 20062,3, and proposes two new candidate regions on chromosomes 5 and 15.

One newly identified region on chromosome 15q22.1-22.2 spans RNF111, a gene known to be involved in early embryonic development. A previously known risk factor includes the autism susceptibility locus on chromosome 7q32. Finally, the top-ranked region in the new study, located at chromosome 3p14, is located only 1307 kilobases from a marker for Asperger syndrome identified by the Finnish team.

Asperger syndrome is classified as a clinically distinct entity in the current edition of the Diagnostic and Statistical Manual of Mental Disorders. Though people with the syndrome share the repetitive behaviors and restricted social interests of individuals diagnosed with autism, they have intact language and cognitive abilities.

In the forthcoming edition of the manual, dubbed DSM5, however, Asperger syndrome is likely to be merged with the broader category of autism spectrum disorders. “There is no evidence that Asperger’s disorder is a distinct biological entity, but it fits within the spectrum,” says Michael Cuccaro, associate professor of human genetics at the University of Miami, who worked on the study.

The researchers had funding to develop a separate Asperger dataset for genetic studies, Cuccaro says, but were stymied by the fact that there are no clear diagnostic criteria for the disorder.

This is a common problem in studies on Asperger syndrome, says geneticist Ed Cook, director of developmental neuroscience at the University of Illinois at Chicago, who was not involved in the study.

“The diagnosis of Asperger’s is inconsistently applied across clinical and research settings,” he says. “The fundamental problem is that there is no category that naturally falls out from the data.”

On the other hand, narrowing a study sample in a genome-wide association study to a specific category of individuals — for example, those with an intelligence quotient above 70, who have intact verbal abilities — could be useful, he says. “There is no question that there is a useful distinction from the perspective of genetics research to find a more homogeneous group to get a stronger signal.”

In recent years, as researchers have probed the heterogeneity of autism, it has become clear to some that the distinction between Asperger syndrome and ‘Kanner’s autism’ may be a spurious one. “There’s no cut-off point between Asperger’s and autism,” says Cook.

Still, the clinical presentation of Asperger syndrome is different than that of autism, notes Margaret Pericak-Vance, director of the John P. Hussman Institute for Human Genomics at the University of Miami and lead investigator of the new study. “They are more similar as a group than the pure autism group.”

Aiming to detect stronger signals from chromosomal regions implicated in Asperger syndrome, the researchers narrowed their study group to individuals with intelligence quotients above 70, who spoke their first words before 24 months of age, and do not have severe sensory problems, motor impairments or other neurological disorders.

In a genome-wide association study like this one, researchers scan more than a million single nucleotide polymorphisms — variations in which a single letter of the genetic code differs between paired chromosomes. In this way, they can identify variations shared between family members or between people who have the same disorder.

The researchers found strong signals coming from three of the regions identified by a group of Finnish researchers. In 2006, that team pinpointed three regions — 3p14.2, 3q25-26 and 3p23 — in a sample of 314 Asperger families.

“Unfortunately, none of the others seem to overlap with genes people have been finding,” says Cuccaro, pointing out that most of the regions identified in this study are filled with introns, DNA regions that do not code for protein.

These results are unlikely to resolve the debate about whether Asperger syndrome is distinct from autism. “As this study shows, some genetic risks for Asperger’s are shared with autism in general, while some are specific to Asperger’s,” says Grainne McAlonan, deputy chief of psychiatry research at the University of Hong Kong.

McAlonan, a behavioral neurobiologist who was not involved in the study, says studies like this one are nonetheless useful.

“I think there is much to be learned from examining common pathways in neurodevelopmental disorders,” she says. “In these neurodevelopmental conditions, what appears to be inherited may be a general vulnerability to brain dysmaturation.”