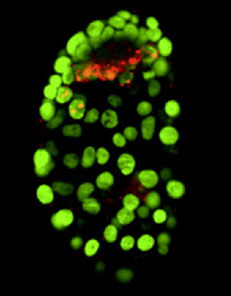 Several lines of converging evidence suggest that low-density lipoprotein receptor-related protein 2 (LRP2), which is involved in early patterning of the brain, is a risk gene for autism. A paper published in June in the American Journal of Human Genetics fingered the gene within a region previously linked to the disorder1.

De novo, or spontaneous, mutations in the gene have also been found in two exome sequencing studies of autism, one published and the other unpublished.

Joseph Buxbaum, director of the Seaver Autism Center at Mount Sinai School of Medicine in New York, and his collaborators first linked the region on chromosome 2, encompassing 68 genes, to autism in 2001. The group studied nearly 100 families that have at least two members with the disorder2.

In 2005, the researchers sequenced the region in these families3. But they were unable to pinpoint a gene within the region because of limitations in genomics analysis at the time.

Collaborator Iuliana Ionita-Laza took another tack. Rather than looking for repeat instances of the same genetic variant, as had been the previous approach, she looked for genes that harbor a greater number of variants in autism cases overall. Her team pinpointed LRP2 as a risk gene within the region.

“At that time, statistical methods to analyze sequence data were not well developed, and people were not thinking about rare variants in sequence data,” says Ionita-Laza, assistant professor of biostatistics at Columbia University. “Today there is much more emphasis on gene-based tests, which assess the cumulative effect of multiple variants in a gene.”

Her approach reflects a growing recognition that many different rare variants make up a major part of the genetic landscape of common diseases.

LRP2, also called megalin, is related to a protein involved in cholesterol trafficking, and is known to play a role in early brain development. Mice that lack the gene have holoprosencephaly, a severe developmental malformation of the forebrain that is typically fatal before birth. 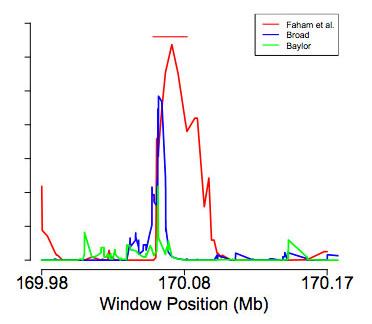 Click to enlarge image Am. J. Hum. Genet. Rare clusters: Autism-linked mutations in LRP2 tend to strike the same small region of the gene, according to results from three different data sets.

Rare clusters: Autism-linked mutations in LRP2 tend to strike the same small region of the gene, according to results from three different data sets.

People with LRP2 mutations can develop Donnai-Barrow syndrome, in which the corpus callosum, the tissue connecting the right and left hemispheres of the brain, is missing or diminished, among other symptoms. LRP2 binds to molecules, such as sonic hedgehog, that are essential to early development.

Researchers haven’t yet looked at the symptoms of people in the autism studies who have LRP2 mutations, though those people are likely to have milder mutations than the mutations that lead to holoprosencephaly and Donnai-Barrow syndrome.

After pinpointing the gene as a likely candidate, Ionita-Laza used a statistical approach called cluster analysis, which is commonly used to track epidemics, to determine whether rare variants strike specific parts of the large gene.

The approach “allows you to focus on particular regions of the gene and maybe get some insight into functionality,” says Ionita-Laza.

The researchers found that mutations cluster in a 25-kilobase window of the 235-kilobase gene, near a site that is thought to bind bone morphogenetic protein 4 (BMP4), which is involved in early patterning of the embryo.

They confirmed the finding in two independent data sets from the ARRA Autism Sequencing Consortium, a collection of 2,400 samples based at the Broad Institute in Cambridge.

The link with LRP2 suggests that risk for autism may be set up earlier in brain development than had been expected, says Sam Pleasure, professor of neurology at the University of California, San Francisco, who was not involved in the research.

“We know there are a lot of kids who have autism-spectrum phenotypes who have much more severe developmental phenotypes, such as seizures, so there has to be a chain of events that can start early,” says Pleasure. “It’s possible that sometimes pure autism is associated with earlier brain problems that we can’t see easily.”

It’s also possible that LRP2 plays a later role in brain development, Pleasure says. “We don’t know a lot about the role of the gene in later brain development because the loss-of-function phenotype is so severe,” he says.

The new findings also help to confirm LRP2 as a true risk gene among a number of candidate genes identified in exome sequencing studies over the past year.

Michael Wigler, professor at Cold Spring Harbor Laboratory in New York, and collaborators identified a de novo mutation in LRP2 in a child with autism. That study was based on the Simons Simplex Collection(SSC), a project funded by SFARI.org’s parent organization.

A second paper, also analyzing the SSC, found an individual with two mutations in genes that are part of a protein-protein interaction network that includes LRP2.

“None of the genes stood out that strongly in terms of having that many families with de novo mutations,” says James Sutcliffe, who has also identified an autism-linked de novo mutation in LRP2, research that is not yet published. “The fact that LRP2 fits together in a protein network supports the rationale for this protein to be involved.”

The researchers are using the same cluster analysis approach to analyze copy number variants (CNV) — sections of DNA that are deleted or duplicated — that are linked to autism. Often one or two genes within a CNV are responsible for many of the symptoms. Looking for clusters of rare single-letter variants in people with autism could help identify these genes, the researchers say.