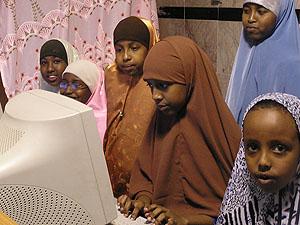 Under cover: Too little sunlight ― leading to vitamin D deficiency ― may be to blame for higher rates of autism among Somali children. Photo: MPR/Roseanne Pereira

Researchers in Minneapolis and Sweden are investigating reports of so-called autism clusters among children from immigrant Somali populations. Some scientists say the clusters may be the result of a vitamin D deficiency ― a largely untested hypothesis.

A report from Swedish neurologists, published on 1 August, says the prevalence of autism spectrum disorders in Somali children aged 7 to 17 years in Stockholm is nearly four times higher than in non-Somali children1.

In Minneapolis, Somalis account for 6 percent of the cityʼs public school population, but make up 17 percent of early childhood special education students who have been labeled as having autism, according to data aggregated by the Minneapolis Public Schools.

Epidemiologists are generally skeptical of disease clusters, and this one is no exception.

“Those numbers are strikingly different, but it’s not really an appropriate comparison,” says Judy Punyko, an epidemiologist at the Minnesota Department of Health.

The Minneapolis statistics include only children from certain age groups and only those attending public schools, Punyko notes. Whatʼs more, Minneapolis autism programs have an open-enrollment policy, meaning that they often accept children from other school districts, potentially skewing the prevalence numbers for the district. “I want to get the real numbers and understand these numbers before we move on,” Punyko says.

In August, Punyko created a study group of 12 experts ― including epidemiologists, physicians, school administrators and special education teachers ― to compare the autism prevalence across all Somali children in the city with age-matched controls.

Even then, she adds, educational data may be incomplete or inaccurate. The 13 special education categories reported to the state and federal government are intended to help provide a child with the best available educational services. If a child has two conditions, such as autism and developmental delay, they can only be assigned to one primary category; Minnesota does not require a medical diagnosis of autism to be included in the category. Finally, some schools, especially those in poorer districts, often overlook mild forms of autism.

Population data used for the analysis also comes from the 2000 census, which may be vastly different than current numbers. “The population of Somalis is a fluid number in Minnesota,” says Punyko.

Minnesota and Sweden both have large numbers of Somali refugees who fled from their war-torn country over the past two decades. A diagnosis of autism, all but unknown in Africa, is seen as a stigma within these immigrant communities.

“Somali parents here call it ‘the Swedish disease,ʼ” says Elisabeth Fernell, a pediatric neurologist at the Karolinska University Hospital in Stockholm and lead author of the Swedish report. Based mostly on discussions with teachers and clinicians at the three autism habilitation centers in Stockholm County, “Weʼve had a suspicion that itʼs more common in children with a Somali background for years,” she says.

Fernell and others say their observations could have a solid scientific hypothesis: lack of vitamin D, a hormone thatʼs essential for brain development and made predominantly in response to sun exposure.

Because dark-skinned people make vitamin D much more slowly than fair-skinned people, Somalis who move to northern latitudes ― such as Sweden or Minnesota ― would be especially susceptible to vitamin D deficiency, the theory goes. Somalis, who are predominantly Muslim, might be particularly susceptible because their clothes typically cover most of their skin.

Vitamin D is the chemical precursor of a steroid hormone that directly affects the expression of more than 2,000 human genes. The vast majority of vitamin D in the body is produced when the skin is exposed to ultraviolet light.

“Studies show that Africans need to stay six times longer in the sun compared to Caucasians to produce the same amount of vitamin D,” says psychiatrist Mats Humble, who has suggested vitamin D deficiency as the explanation for higher numbers of autism among Somalis in Sweden.

John Cannell, a psychiatrist at Atascadero State Hospital in California and director of the nonprofit Vitamin D Council, in August also linked vitamin D deficiency to autism, arguing that the increase in autism prevalence in the past two decades correlates with the increasing recommendations from the medical community to avoid the sun2. “[The link] explains every known epidemiological fact that I’m aware of about autism,” Cannell says.

Along with explaining apparent differences in ethnic populations, Cannell says, the theory explains why people with autism have reduced bone thickness3 (vitamin D plays a pivotal role in calcium production and bone growth); why they’re often born in March4 (their mothers were exposed to less sun during a critical time of pregnancy); and even why autism is more prevalent in boys than girls (testosterone inhibits vitamin D production).

He also cites 2004 results from Australian researchers, who found that low vitamin D levels in a rat embryo lead to increased brain size ― which is sometimes reported in children with autism ― and cellular growth and an altered brain shape5.

The only way to test this hypothesis would be to test pregnant womenʼs blood for vitamin D levels, and then assess the prevalence of autism in their children. In October, Fernell’s group plans to begin collecting blood samples from young children and their mothers, both from Somalia and from Sweden.

For now, however, Cannell’s idea is only conjecture.

“I think you have to be cautious not to go overboard with this hypothesis,” says clinical psychologist Michael Cuccaro of the Miami Institute for Human Genomics, who’s done genetic studies comparing African American and Caucasian children with autism. “It’s testable, and I think that’s the key.”

Many other hypotheses could explain a difference in autism rates between Somalis and others, should one exist. Somalis tend to marry close relatives, which leads to a much greater risk of genetic disorders and mental retardation. Clinicians in Minnesota and Fernellʼs group have both have found that Somali children with autism tend to show severe mental retardation.

Cuccaro says it’s also possible that different ethnic groups have genetic differences that lead to an increased susceptibility to autism.

“People in autism [research] tend to suggest the same rate regardless of culture or country. But when you look at other diseases, that’s not necessarily the case,” he says. Alzheimer’s disease and multiple sclerosis, for instance, have different prevalence rates in Africa than in the U.S. or Europe. “Now’s the time to look at this in autism.”

Previous studies on autism prevalence among ethnic groups have found few differences. “One of the biggest challenges is getting a large enough population sample of the different racial groups,” says behavioral scientist Catherine Rice, who leads the Autism and Developmental Disabilities Monitoring Network at the US Centers for Disease Control and Prevention (CDC).

Since 1999, the network has collected autism data from educational programs and clinical sources at more than a dozen locations around the U.S. Its first report, released in February 2007, found that the prevalence in 2002 of autism spectrum disorders among white non-Hispanic children ranges from 3.3 to 12.5 for every 1,000 children. For black non-Hispanic children, the prevalence is slightly less, ranging from 3.4 to 7.7 per 1,000, though itʼs unclear whether thatʼs an indication of lesser access to special education and healthcare services, or a true difference between races.

Hispanic populations tend to have lower prevalence, between 0.3 and 9.7 per 1,000, partly because they often don’t have access to autism services. “They’re also more likely to be coming from a family with English as a second language,” Rice says, making it more difficult to diagnose language delays. Subsequent data have shown similar prevalence rates, Rice says.

In Minneapolis, educators have been concerned about Somali children for the past five or six years, says Ann Fox, director of Special Education Programs for the Minnesota Public Schools. “We’re involved in all of the screening and evaluating [for autism] and we’ve been seeing for awhile what seems like a disproportionate number of kids referred who are Somali,” Fox says.

But there have been no reports of autism clusters in Somali populations elsewhere in the United States, notes Rice.

“Typically when you have a report of an increase in a certain community, you’d expect that other communities would call and say, ‘Hey we’re seeing this, too,ʼ” Rice says. “But I haven’t personally heard of any of these.”