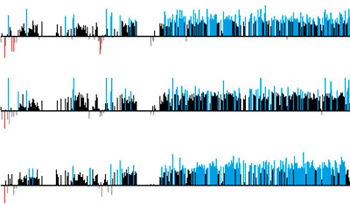 Homing in: Duplication of the 1q21 chromosomal region, shown in blue, is more likely to be linked to autism than to other developmental disorders.

Small regions of DNA that are structurally prone to deletions and duplications are unlikely to play a major role in autism, according to research published 7 February in the American Journal of Human Genetics1.

The researchers used a specialized chip designed to detect copy number variations (CNVs), duplications or deletions of DNA, smaller than 100,000 base pairs. The study, which analyzed the genomes of more than 2,500 people with autism and 580 controls, is the first to look at so-called ‘hotspots’ of this size.

Large CNVs, such as 16p11.2, have a well-known link to autism2. However, the new study shows that people with autism and controls have similar rates of these small CNVs.

The results are “a bit disappointing,” says lead investigator Evan Eichler, professor of genome sciences at the University of Washington in Seattle. “That suggests these smaller hotspots aren’t playing a significant role in autism etiology.”

Others say the findings are informative despite the negative result.

“These small hotspots have never really been looked at and are small enough that they are quite difficult to look at,” says Stephan Sanders, a postdoctoral researcher in Matthew State’s lab at Yale University, who was not involved in the research. “This is the best snapshot we have yet of small CNVs in autism.”

Because large CNVs encompass a number of genes, it’s difficult to know which gene or genes are the true genetic culprit in a particular disorder. Researchers had hoped that finding small CNVs linked to autism would help pinpoint the candidate genes.

By showing that the small CNVs aren’t important in autism, the study suggests that large CNVs raise autism risk precisely because they disrupt multiple genes. There may be more than one genetic culprit in people with autism.

Hotspots are regions of DNA flanked by repetitive sequences that make them more prone to deletion or duplication. Existing technology can detect large CNVs but not small ones, so Eichler and his collaborators designed a chip to detect CNVs linked to small hotspots, as well as small CNVs not linked to hotspots.

The study confirmed previous findings showing that the same CNVs are linked to both autism and developmental delay. (Most large CNVs raise the risk of a number of different disorders, such as schizophrenia or intellectual disability.)

The researchers found that duplication of the 1q21 chromosomal region is more likely to be linked to autism than developmental delay, however. They also found a single case in which a gene called CDH1L within the 1q21 region is deleted in a child with autism. That finding needs to be confirmed in more individuals with the disorder.

Large CNVs are typically spontaneous, occurring in the parent’s eggs or sperm. But the new analysis shows that the smaller CNVs are often inherited from typical parents, further proof that they don’t play a significant role autism.

Eichler and Sanders both say the next step would be to sequence the entire genomes of the participants in the study. That will make it easier to detect a wider variety of small CNVs.

“It would be a crying shame if we didn’t put the nail in the coffin on this one,” says Eichler.

To date, most sequence data on people with autism are confined to the exome, the protein-coding portion of the genome. For technical reasons, it’s difficult to detect CNVs with just exome sequencing. Although the cost of sequencing is dropping quickly, it’s still prohibitively expensive to sequence the entire genomes of large samples.

Exome-sequencing studies of people with autism over the past year suggest that hundreds of genes are likely to play a role in the disorder. That means that individual mutations may be extremely rare, and scientists will need to analyze thousands or tens of thousands of people with the disorder to confirm the role of a specific gene.