Scientists home in on key spot in brain for autism risk 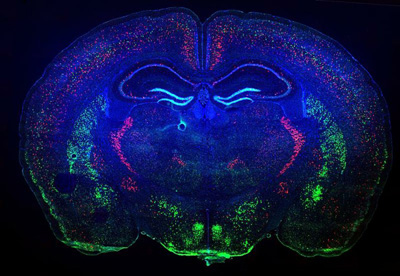 By analyzing the expression patterns of nine candidate genes for autism, researchers have identified a population of cells and a select time during fetal development that may be key to the disorder.

The researchers, members of Matthew State’s laboratory at Yale University, presented preliminary findings from this work Friday at the 2013 International Meeting for Autism Research in San Sebastián, Spain.

State’s team previously identified these nine candidates by sequencing the exomes — the protein-coding portions of the genome — of hundreds of families that have one child with autism. Each of the genes turned out to be mutated in two or more people with autism.

In a public lecture held at the Simons Foundation in New York in April, State said that when he asked a cell biologist colleague how to further explore the role of these mutations, the colleague’s response was that they should first figure out which cell type to focus on and the time during development that is most relevant to autism.

The same mutation can have different effects in various cells, and at different times, making it challenging to determine the role the mutations play in autism.

State’s team used a publicly available database called BrainSpan that maps gene expression in different brain regions from fetal development through adolescence and adulthood. State moved in March to the University of California, San Francisco, where he is director of the Langley Porter Psychiatric Institute.

By analyzing gene expression data for the candidate genes, the researchers homed in on a specific set of neurons in the prefrontal cortex and primary motor somatosensory cortex at a time that is midway through fetal development. They can study the effects of the mutations in those cells in animal models, or use human stem cells to generate neurons with the mutations.

“We have geneticists and neurobiologists working together; that’s amazing,” says Thomas Bourgeron, director of the Human Genetics and Cognitive Functions Unit at the Institut Pasteur in Paris, who was not involved in the study. “The link between gene mutations and gene expression is so important.”

State and his team created a network incorporating the 9 candidate genes and 20 others whose gene expression patterns correlate most tightly with them. They also looked at a list of second-tier candidate genes — those mutated in at least one person with autism — and found that those genes are more likely to be part of the network than would occur by chance.

“The hypothesis is that if genes closely share expression patterns across development, there is a good likelihood that at some point they are involved in shared function,” State said at the April lecture.

The researchers also looked for the point in time and space at which the most genes in the network are expressed. That peak occurs midway through fetal development, in the prefrontal cortex and somatosensory cortex.

“The findings help put those nine genes into developmental context,” says Daniel Geschwind, distinguished chair in human genetics and professor of neurology and psychiatry at the University of California, Los Angeles School of Medicine. Geschwind was not involved in this study but is working on a similar approach.

The genes expressed in State’s network tend to be involved in neuronal development and differentiation, the growth of axons — neuronal projections that form connections with other neurons — and the transcription of RNA from DNA, according to Jeremy Willsey, a graduate student in State’s lab who presented the research on Friday.

The researchers have preliminary data from a more fine-grained database at the Allen Institute for Brain Science in Seattle, which has mapped gene expression in specific cell types of the brain. They found, for example, that the gene expression patterns appear to converge on neurons that produce glutamate, a chemical messenger in the brain that has been linked to autism.

Brain imaging data and better clinical information from people with the various mutations would help the researchers interpret the results, says Bourgeron.

The network also allows researchers to prioritize genes from the list of 100 second-tier candidates for further study. “It gives us a way of narrowing down the list and translating it to actionable understanding,” said Willsey.