Scientists home in on autism candidate gene’s role in brain 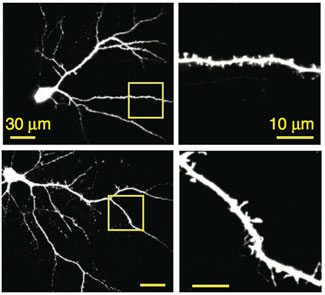 Friendly neighborhood: Cells lacking neuroligin-1 have a normal number of synapses (top), but lose them when their neighboring cells express the protein (bottom).

Friendly neighborhood: Cells lacking neuroligin-1 have a normal number of synapses (top), but lose them when their neighboring cells express the protein (bottom).

Four new studies of neuroligin-1 (NLGN1), a gene linked to autism, unravel its complex role in regulating synapses, the connections between neurons.

Three of the studies, published 18 October in Neuron1,2,3, find that the NLGN1 protein is involved in both strengthening and weakening synapses. A fourth, published 8 November in Nature Neuroscience, shows that its role is highly dependent on the environment4.

NLGN1 is a member of a family of four proteins known to be involved in synapse maturation5 and maintenance. The proteins were first linked to autism in 2003, when researchers discovered mutations in NLGN4 in two brothers with autism. A mutation in NLGN1 and a duplication of the gene have been found in two individuals with autism6.

Better understanding of the function of these proteins may help researchers understand how mutations in them contribute to autism risk.

“A lot of people are interested in NLGN1, because it’s part of a gene family that comes up again and again in autism, but we really don’t understand what it does,” says Bernardo Sabatini, professor of molecular biology at Harvard Medical School and lead investigator of the Nature Neuroscience paper. “These papers each find interesting and distinct aspects of NLGN1 biology.”

NLGN1 sits at the receiving end of the synapse and binds to a neurexin on the transmitting end. Mutations in the neurexin family of proteins have also been linked to autism.

NLGN1 spans the cell membrane, and a part of it juts outside the cell. Two of the new studies, one led by Michael Ehlers and the other by Taisuke Tomita at the University of Tokyo, show for the first time that the protein is cleaved outside the cell, destabilizing the synapse.

Another study, led by Roger Nicoll at the University of California, San Francisco, found that NLGN1 strengthens signaling through the synapse. The protein does so via a type of cellular learning called long-term potentiation, or LTP, in cells of the hippocampus, that study found.

Research on NLGN1 has been somewhat contradictory thus far. Deleting the gene in mice has only subtle effects: The animals groom themselves more often than controls do, and show sluggish synapses in certain parts of the brain.

But adding the protein to non-neuronal cells has a profound effect, triggering the cells to try to form synapses7. And deleting certain forms of the gene in neurons grown in a dish causes severe defects in synapses8.

“We went into this thinking, ‘How are these two groups of people doing rigorous experiments coming to opposite conclusions?’” says Sabatini.

Sabatini’s study shows that the answer may be that NLGN1’s effect on synapses depends on the context: whether a cell’s neighbors express the protein.

Cultured neurons from mice that lack both copies of NLGN1 have a normal number of synapses. However, when the researchers add some control neurons to the culture, the mutant neurons lose their synapses.

“It’s a profound observation that raises major issues of mechanism,” says Thomas Südhof, professor of molecular and cellular physiology at Stanford University in California, who was not involved in any of the studies. The new findings underscore an “urgent need to understand how neuroligins work at the synapse.”

Sabatini’s group focused on neurons in layer 2/3 cells of the cortex, which integrate information from other parts of the cortex. They altered levels of NLGN1 in mice missing one or both copies of the gene.

In the brains ofcontrol mice, adding the protein increases the number of synapses by a little bit, says Sabatini. “But if you add [NLGN1] to cells that don’t have it, you get an enormous phenotype.” Neurons from mice that lack NLGN1 grow many more new dendritic spines — small protrusions on the neuron that form synapses — and synapses than do neurons from controls.

It’s possible that cells with more NLGN1 are more successful at making synapses than their neighbors are, Sabatini says. The brain’s neuronal connections are undergoing constant changes based on new information, a phenomenon known as synaptic plasticity. Competition is one mechanism by which only the most useful synapses survive.

“I think that data from this paper is the strongest evidence yet that there really is a competition going on in the cortex for synapses,” Sabatini says.

The next step is to figure out how NLGN1 levels are regulated in the brain. “How does one cell end up with more than its neighbor?” says Sabatini.

The two Neuron papers describing how NLGN1 is cut provide hints of one such mechanism.

There has been a lot of work on how neuroligins contribute to the growth and organization of synapses, says Ehlers, chief scientific officer of neuroscience at Pfizer. But much less is known about how synapses are disassembled and what that means for neuronal signaling.

The studies show for the first time that NLGN1 is cleaved, destabilizing its partner neurexin. The neurexin then moves away from the synapse, diminishing the release of chemical signals there and weakening the synapse.

Both studies also show that neuronal activity increases the frequency at which NLGN1 is cleaved — which in turn inhibits the formation of dendritic spines.

Ehlers’s study implicates an enzyme called MMP9 in the cleavage of NLGN1, whereas the Japanese group points to an enzyme called ADAM-10. Both groups say it’s possible that both enzymes are involved, perhaps under different conditions.

Their studies were done in cell culture, so it will be interesting to probe the effect of NLGN1 cleavage in an intact brain, says Südhof.

NLGN1 also appears to play a role in synaptic plasticity. In mice raised in the dark and then exposed to light, the new sensory activity drives rapid remodeling of the visual circuit. The exposure to light also ups NLGN1 cleavage in the visual cortex, says Ehlers.

The findings point to NLGN1 as a way to regulate synapses and neural circuits broadly, says Ehlers, particularly during periods of development — for example, development of the visual cortex — that depend on activity to shape the circuit.