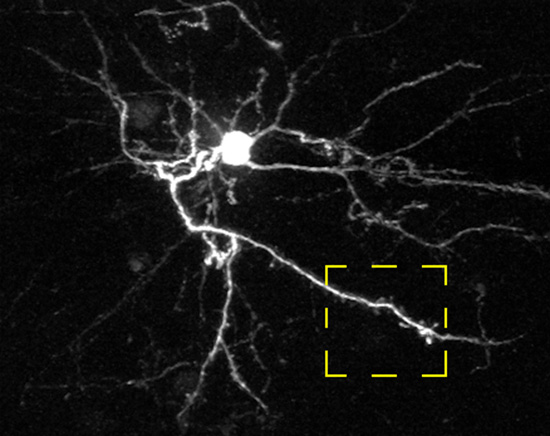 Scientists have devised a technique to watch, in real time, the dynamic ebb and flow of brain connections in young mouse models of fragile X syndrome. The findings appeared in June in the Journal of Neuroscience1.

Postmortem tissue from people with the syndrome2 and static images of the brains of young mouse models3 have both shown that fragile X brains look much less mature than do the brains of control animals. For example, they have abnormally long and dense dendritic spines — the slender neuronal projections that receive electrical messages from other cells and that are heavily pruned during development.

The new work shows, however, that dendrites in the fragile X brain appear more normal than those studies suggested.

“This is a big deal,” notes Anis Contractor, assistant professor of physiology at Northwestern University, who was not involved in the study. “It contradicts the dogma in the field that in all parts of the cortex [in fragile X] there’s this immature, delayed development.”

Healthy brains are remarkably plastic, especially in early development. Connections between neurons constantly form and disintegrate, allowing children to learn quickly and adapt to changing environments. In the brains of those with fragile X syndrome, that complex choreography is critically disrupted.

In the new study, researchers captured spine development in mice over their first two weeks of life using in vivo two-photon microscopy, a complicated technique requiring equipment that typically costs about $500,000.

When the mice are in utero, the researchers use genetic engineering techniques to insert fluorescent proteins into progenitor cells that will later migrate to specific layers of the cerebral cortex. After the animals are born, the researchers remove a small part of the newborns’ skull, and cover it with a piece of glass, literally creating a window into the brain. Two-photon microscopes then record the labeled cells in anesthetized mice, peering deeply — several hundred micrometers — into the tissue.

When they took this approach with mouse models of fragile X, the researchers found, much to their surprise, that there is no difference between these mice and control animals in the length or density of dendrites.

“How you get too many of these spines in the adult, or why they appear longer in the adult, we can’t explain yet,” notes lead investigator Carlos Portera-Cailliau, assistant professor of neurology and neurobiology at the University of California, Los Angeles.

He says it could be related to a problem of turnover, the rate at which spines disappear. His team found that the young mutants show significantly faster spine turnover than do controls, which presumably keeps them from forming stable and mature connections.

“[Turnover measurements] are something you can only get by doing a dynamic measurement, and that you wouldn’t see in a single, static picture,” says Carolyn Beebe Smith, senior investigator at the National Institute of Mental Health, who was not involved in the study. “[This technique] is a much more realistic way of looking at what’s going on in the brain.”

The researchers also treated the mutant mice with MPEP, a drug that blocks receptors for glutamate, a chemical messenger that’s ubiquitous in the brain.

Drugs in the same class have famously reversed some spine abnormalities in mouse models of fragile X4, and are showing modest improvements in early clinical trials of adults with the syndrome.

Surprisingly, however, MPEP doesn’t slow down the spine turnover in these young mutants, the study found. In fact, the drug makes them less mature: at 10 to 12 days of age, treated mutants have abnormally long protrusions, resembling those of untreated animals at 7 to 8 days of age.

The researchers propose several explanations for these unexpected results. MPEP could affect other aspects of the spine function, such as length or density, but not the rate of turnover. Alternatively, it could be a matter of position: the reversal studies looked at the hippocampus, whereas the new study focused on the sensory cortex. Finally, it is possible that glutamate blockers are most effective in later stages of development.

Although the two-photon approach is a significant improvement over fixed-tissue methods, some aspects of the method make it an imperfect reflection of what’s going on in humans, Beebe Smith notes.

For instance, administering anesthesia to the animals may affect the activity of their neuronal spines. Sex may also play a role: males with fragile X syndrome have much more severe deficits than do females, but this study used animals of both sexes. The researchers may have seen more significant abnormalities in spine shape had they only used males.

“I think it’s too early to say that this has some bearing on the clinical trials going on right now,” Beebe Smith says.