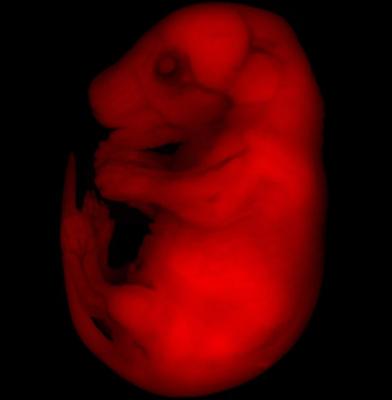 Red hot: These mice carry a gene that makes their coats glow red, allowing researchers to screen them for chromosomal changes.

Two independent groups have created mice that have deletions or duplications in a large section of chromosome 16. Each team has produced an animal with a different set of features, some of which — such as large head size and repetitive behaviors — are reminiscent of people with autism who carry the same genetic glitch.

Alea Mills of Cold Spring Harbor Laboratory and Ricardo Dolmetsch of Stanford University both report that they have engineered mice carrying a deletion or duplication — dubbed a copy number variation, or CNV — of chromosomal region 16p11.2.

This particular spot is abnormal in about one percent of individuals with autism, making it one of the most common — and most talked-about — genetic risk factors.

Neither team has yet published its findings, but Mills described hers in detail at a symposium in Boston on 1 December.

The new mice have generated much buzz in the field. “[The work] is going to change the way autism research is done,” Mriganka Sur, head of brain and cognitive sciences at the Massachusetts Institute of Technology, said at the symposium. “You need these technologies, combined with technologies for analyzing the mice, in order to make progress.”

Chromosomal region 16p11.2 was first linked to autism three years ago, when Mills’ colleague Michael Wigler reported in Science that CNVs crop up more frequently in individuals with autism than in healthy controls1.

A deletion in 16p11.2 spanning 500 kilobases was one of 17 CNVs he found in participants with autism. A year later, a Boston group found that one percent of children with autism carry a deletion or duplication in the region2.

A flurry of subsequent research implicated the hotspot in other psychiatric disorders. Canadian scientists showed that CNVs in this region sometimes appear in individuals with mild developmental delays, mental retardation or bipolar disorder3. Another study found that carrying 16p11.2 duplications increases the risk of schizophrenia by 14-fold4. All of the studies also identified healthy people — often relatives of children with autism — who carry these variants.

To explore how the variants affect brain circuitry and behavior, researchers have sought to model them in animals. But few labs have the expertise to do complicated chromosomal engineering.

Traditional genetic engineering involves taking a dish of mouse embryonic stem cells and knocking out just one spot on a chromosome. The cells grow into a mouse carrying, for example, a dysfunctional target gene. In contrast, to model a CNV deletion, the engineer must make two ‘cuts’ on the chromosome: one at the beginning of the segment and another at the end.

This includes several challenges. First, each time the stem cells are manipulated in culture, it increases the risk that they will not differentiate properly. For the cutting enzymes to work properly, the two ends of the segment also have to line up: the longer the segment, the less likely it is to align correctly. Finally, researchers must breed the mice for several generations before getting a litter with the desired combination of reengineered chromosomes.

“The bigger the deletion or duplication you want to do, the harder it is,” notes Guoping Feng, professor of brain and cognitive sciences at the Massachusetts Institute of Technology, who was not involved in the new work.

Mills is an expert in this technique. In 2007, she made mice carrying CNVs on a segment of chromosome 1 that holds an important cancer gene5. The following year, she made mice missing the chromosomal region 22q11.2, which is associated with schizophrenia6.

In her new work, Mills found that many mice missing one copy of 16p11.2 die early in life. “That was the first really big surprise,” she says. “I think it has big implications that maybe we want to be looking harder for other cases as causes of infant [and] neonatal death.”

In the animals that survive, Mills has found several unusual behaviors. When held by the tail, for example, they seem to repetitively grasp their front paws and twitch their legs. Left alone in their cages, the mutants scurry back and forth across the top of the cage, where the food is located. “They really get fixated,” Mills says. “You might imagine this is restricted or repetitive behavior.”

However, although this behavior is “definitely interesting,” says Feng, the researchers need to quantify its frequency. “Even in regular mice, you will find this kind of phenomenon. The question is, how often is it happening?” he says.

Using HomeCageScan — a technology that scans the mice in their cages and codes some of their behaviors — Mills also showed that mice with the deletion have longer active periods both during the day — when mice typically rest — and during the night compared with controls. This could be relevant to autism, Mills says, because some children with the disorder have circadian rhythm problems and trouble sleeping.

Finally, collaborating with researchers at the Hospital for Sick Children in Toronto, Mills has used magnetic resonance imaging to scan brains from the mutant mice. Analyzing 62 brain regions, the scans showed that mice with the deletion have significant size differences in 11 regions compared with healthy controls.

Using a similar method of chromosomal engineering, Dolmetsch’s team has also created mice with CNVs in the 16p11.2 region. Along with the CNV, the researchers insert a gene that makes the mouse’s coat glow red under ultraviolet light. This allows them to easily screen for the pups in which the genetic manipulation worked.

Based on preliminary analyses, mice with the deletion have larger brains and smaller bodies compared with controls, according to Dolmetsch. Some children with autism also have large heads. Intriguingly, however, in people the 16p11.2 deletion has been associated not with small stature, but with obesity.

“That’s the weird thing,” Dolmetsch says. “It could be a metabolic disruption, it could be a disruption in certain parts of the brain that control eating. There are all sorts of things that could be wrong — we’re not sure yet.”

Both teams plan to thoroughly characterize the mice and compare them with others missing only parts of the region, in order to pinpoint the important genetic culprits. Dolmetsch is also planning to create mice in which the CNVs only crop up in particular regions of the brain.

“This might tell you that, say, it’s say the cerebellum that’s important in autism, or the thalamus or the cortex,” he says. “We think this could be really useful.”