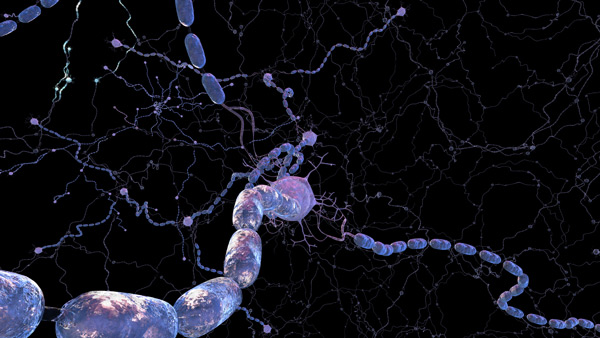 People with autism who have mutations in a gene called PTEN have a distinct profile of cognitive impairments and structural abnormalities in the brain. The profile, published 7 October in Molecular Psychiatry1, points to a subtype of autism with these features.

The study suggests PTEN mutations trigger an overgrowth of white matter, which consists of nerve fibers that carry signals from one brain region to another. This may explain why head enlargement, or macrocephaly, sometimes accompanies autism.

An estimated 7 percent of children with autism and macrocephaly carry a PTEN mutation2. Apart from its role in controlling cell growth, the gene also regulates neurons’ ability to alter the strength of their connections.

A study last year reported that certain regions of the cortex are thicker in people with autism than in controls. The people in the new study who have autism and PTEN mutations have a cortex of normal thickness.

“What’s interesting in this case is they have these huge brains, and yet their cortical thickness is not increased,” says Frazier, director of the Cleveland Clinic’s Center for Autism.

More broadly, the study represents a growing trend in trying to characterize the effects of mutations in a single autism gene. By contrast, traditional studies group together people with autism of various causes, which may cancel out any differences among them.

“In the autism field, what we’ve been doing for years is looking at individuals with autism and comparing them to typically developing individuals,” says Antonio Hardan, professor of psychiatry and behavioral sciences at Stanford University in California, who was not involved in the new study. “Part of why I’m excited about this study is because it is helping us differentiate between different subgroups of individuals with autism.”

“I think that’s the kind of interesting comparison we all need to be making to say whether these particular traits and phenotypes we’re seeing are distinct and specific to a particular subtype,” says Raphael Bernier, associate professor of psychiatry and behavioral sciences at the University of Washington in Seattle. Bernier was not involved in the study but is characterizing people with mutations

“Part of why I’m excited about this study is because it is helping us differentiate between different subgroups of individuals with autism.”

in CHD8, another autism candidate gene.

Frazier’s team found that people with autism and PTEN mutations have larger brains overall than those in the other groups. In particular, they have more white matter in the cortex — but this does not affect measures of cortical thickness. They also have an enlarged corpus callosum, which connects the brain’s hemispheres. Up to one in three people who lack this structure are diagnosed with autism.

Those who have autism and PTEN mutations also have more abnormal patches in the white matter, known as ‘hypointensities.’ “We don’t know exactly what those are,” Frazier says. “But in general, what we can say is the white matter is just abnormally developed.”

Compared with the other groups, people with PTEN mutations tend to score lower on tests of intelligence, reaction time and working memory. Even with adjustments for differences in intelligence quotients, they still show slight deficits in working memory and processing speed.

Continuing this work in mice, the researchers found that mice with PTEN mutations have an enlarged corpus callosum but no change in cortical thickness. The mutations also affect the levels of genes involved in the production of myelin, the protective sheath on neurons that enhances their ability to carry electrical impulses.

“Aberrant myelination could definitely contribute to processing speed,” says Mustafa Sahin, associate professor of neurology at Harvard University, who was not involved in the study. “It could reduce the speed of electrical discharges [traveling] from one portion of the brain to another portion of the brain.”

Sahin is collaborating with Frazier and others to characterize brain and behavior in people with autism who have mutations in PTEN, and TSC1 and TSC2. Mutations in these latter genes cause tuberous sclerosis, an autism-related disorder.

PTEN is somewhat unique among autism risk genes because its function is relatively well characterized.

“That’s a real advantage here, because not only are we decreasing heterogeneity, but we actually have a really good understanding of the major biological pathways that are being influenced,” Frazier says. That understanding may also guide treatment, he notes.

PTEN blocks the activity of the PI3K pathway, which regulates cell growth, survival and differentiation. TSC1 and TSC2 affect the same pathway. Interestingly, children with tuberous sclerosis show white matter abnormalities that are similar to those seen in individuals with PTEN mutations3.

“If part of what PTEN is doing is driving these changes with the cortical white matter,” he says, “then we might see that whether individuals have autism or not.”