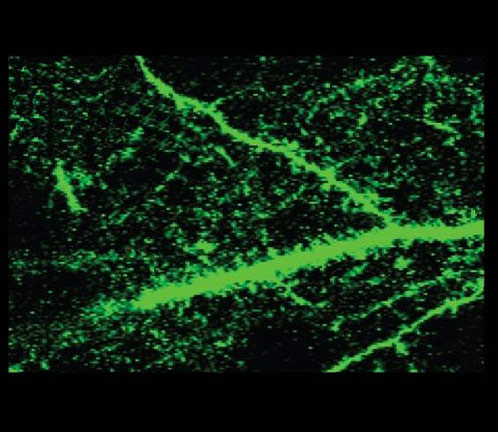 Shrinking spines: When DISC1 is absent or suppressed, neuronal projections do not form properly.

A new study provides the first functional link between the schizophrenia risk gene DISC1 and two candidate genes for autism.

DISC1 significantly alters expression of NRXN1 and NRXN3 at key phases of development, according to a brief report in the June issue of Molecular Psychiatry1.

Neurexins and neuroligins are needed for the assembly of synapses, the junctions between neurons. Neurexins are located on the side of the synapse that transmits electrical impulses, and neuroligins on the receiving side.

A growing body of literature suggests that faulty synapses, and correspondingly impaired connections between neurons, may contribute to autism2,3.

In the new study, researchers show that in mice, a mutant form of DISC1 can cause either too much or too little neurexin to be expressed during embryonic development and after birth.

Between embryonic days 15 and 18, when synapses form, neurexin expression in the mice rises sharply and then drops precipitously, whereas in controls the expression levels fluctuate very little.

At day 7 after birth, synapses normally are pruned, or cut back, to create stronger and more efficient neural networks. Here again, expression of NRXN1 and NRXN3 in the mutants deviates significantly from controls: Levels of these proteins increase in the mutants just as they drop to nearly their lowest point in control animals.

These findings “will be a great starting point for further studies,” says Thomas Südhof, professor of molecular and cellular physiology at Stanford University in Palo Alto, California. Südhof, who was not involved in the new study, identified neurexins in 19924.

Researchers first identified DISC1 mutations in a Scottish family in 20005. Members of the family across four generations have been diagnosed with schizophrenia, bipolar disorder, depression and adolescent conduct disorder (later diagnosed as autism).

At the time, researchers were skeptical of the idea that a single gene could lead to a range of psychiatric conditions, says David Porteous, chair of human molecular genetics and medicine at the University of Edinburgh in Scotland, who led that study.

“But everybody now appreciates that many of these conditions don’t fit neatly into [Diagnostic and Statistical Manual of Mental Disorders] boxes,” says Porteous, a co-investigator on the new study. “It’s a spectrum. The unifying idea is to think of them all as having shared neurodevelopmental aspects.”

Several studies have confirmed DISC1’s involvement in multiple neuropsychiatric disorders, though the primary focus remains on schizophrenia. Because DISC1 binds to numerous proteins involved in structure and signaling, mutations in the gene can unleash a cascade of effects and produce variable outcomes.

“The DISC1 protein acts like a sticky glue to a whole host of proteins, putting them in the right place in brain cells and modifying their activity,” Porteous says. “That extra dimension explains why when DISC1 is damaged, it has such a profound effect.”

Other researchers exploring DISC1’s role are beginning to tease out how the gene regulates the growth and maturation of synapses6. For example, postmortem studies of people with schizophrenia have consistently shown a puzzling shrinkage in dendritic spines, the neuronal projections that receive electrical signals.

“DISC1 is one of the regulatory factors that affects the morphology and function of the spine,” says Akira Sawa, director of the program in molecular psychiatry at the Johns Hopkins University School of Medicine in Baltimore. “Over-activation [of DISC1] damages the spine, but too little activation does too.”

This finding may have relevance for autism as well as schizophrenia, given that common pathways are likely implicated in both disorders.

“DISC1 may be an important new tool to study synaptic mechanisms in autism, but what the real difference in the synapse between autism and schizophrenia is, is not so well known yet,” Sawa says.

Correction: This article has been modified from the original. NRXN2 has been corrected throughout to NRXN3.