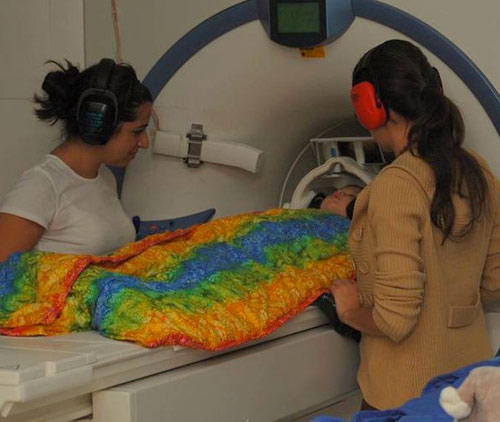 UC Davis-MIND Institute Deep sleep: Only ten years ago, researchers often relied on sedation for imaging children with autism, but that is becoming increasingly rare.

Scanning children’s brains while they sleep is a viable alternative to sedation for infants and toddlers across the entire autism spectrum, according to a study published in the January issue of the Archives of General Psychiatry1.

Even children with severe forms of the disorder can be successfully scanned during sleep, the study suggests, dispelling concerns that the technique biases studies toward higher-functioning children.

The finding is good news for autism researchers, who face mounting concern over the long-term effects of sedation even as the need for longitudinal imaging studies of young children grows.

Only ten years ago, the use of anesthetics such as propofol was standard for any imaging studies involving young children with autism or other developmental delays. But that has changed in the face of emerging evidence that these drugs may adversely affect the developing brain, prompting concern among both scientists and parents.

In response, autism researchers have developed a variety of tricks for coaxing infants and toddlers to sleep in magnetic resonance imaging (MRI) instruments. These sleep protocols now play a central role in brain imaging studies of autism.

The new study draws on data from the Autism Phenome Project at the MIND Institute of the University of California, Davis, to assess abnormal brain size in toddlers with autism. The researchers, led by Christine Wu Nordahl, assistant adjunct professor of psychiatry and behavioral sciences at the institute, analyzed changes in amygdala volume among a cohort of 45 boys with autism and 25 typically developing children.

Validating the sleep protocols in children with autism, although not the focus of the paper, was essential to the researchers’ methodology. They report that 88 percent of 3-year-old participants who attempted a sleep MRI were successful. Using the Developmental Quotient and the Autism Diagnostic Observation Schedule to measure developmental ability and autism severity, the researchers found no significant difference between the children who responded to the sleep protocols and those who did not2.

Researchers’ interest in early brain development overlaps with growing concern about the effects of anesthesia in young children. Animal studies have linked general anesthesia in rat pups with neuronal cell death and long-term effects on memory and learning. The most significant side effects occur in pups that were anesthetized during the period when the brain is forming many new connections between neurons. In humans, this process peaks between infancy and 3 years of age3.

The rat studies are alarming, but their implications for people are unclear. The researchers gave the rats cocktails of anesthetics at doses much higher than would typically be given in the clinic. Studies of children who had surgery in infancy have so far not found a causal link between anesthesia and long-term effects. For instance, children with multiple anesthesia exposures appear to be at a higher risk of learning disabilities, but it is unclear whether this is the result of the anesthesia or of the underlying illness that required the surgery4.

Still, all these suggestive findings have caused concern among scientists, not to mention generated much media coverage. Several studies are underway to develop a stronger evidence base, including Smart Tots, a national research initiative funded in part by the U.S. Food and Drug Administration.

In the meantime, the ability to use sleep instead of anesthesia makes research studies more attractive to parents of young children.

“I wouldn’t have been involved if they had to sedate my boys — not that many times,” says Shamay Bartlett of Citrus Heights, California. Bartlett’s eldest son was scanned twice for the Autism Phenome Project and her 2-year-old twins were scanned three times each for a different study at the institute.

The Infant Brain Imaging Study, a multi-site project that requires 500 infant siblings of children with autism to be scanned at 6, 12 and 24 months, relies almost exclusively on sleep scans. Launched in 2008, it is funded in part by the Simons Foundation, SFARI.org’s parent organization.

“We always insist on trying natural sleep first,” says Stephen Dager, professor of radiology at the University of Washington, one of the study sites. Dager says although sedation is an option for the 24-month-olds, who tend to resist sleep more than infants do, none at his site have needed it so far.

“It’s not rocket science,” says Nordahl, who developed a sleep imaging protocol as part of her post-doctoral fellowship at the MIND Institute. The institute conducts a variety of brain imaging studies on young children, including the Autism Phenome Project, which uses various measures of development, including MRI scans, beginning when children are 2 to 3.5 years of age.

In a 2008 paper, Nordahl and her colleagues reported a 93 percent success rate in obtaining bedtime MRIs from children with autism and typically developing children aged 2.5 to 4.5 years. In contrast, a paper three years earlier reported that less than half of scans obtained during sleep were usable5.

But researchers cannot take anesthesia out of their toolbox yet. Sleep protocols appear to lose effectiveness in children older than 5 years, especially those on the lower-functioning end of the autism spectrum. MRI studies in older children and teenagers continue to rely on sedation.

“I think everyone in the community would prefer not to do it. There is an element of risk, known and unknown,” says Heather Hazlett, assistant professor of psychology at the University of North Carolina School of Medicine. However, she notes that one-time anesthesia is generally regarded as safe, and without it researchers would not have access to data about brain development in older children with autism.

The emphasis on imaging during natural sleep in the research community stands in contrast to clinical medicine. In the U.S., some six million children are given anesthesia every year, and sedation is standard for young children in hospital MRI labs.

Peggy Seidman, associate professor of anesthesia at Stony Brook University School of Medicine in New York, says many doctors opt for scans when making an initial diagnosis in lieu of a careful physical and patient history. “We are ordering a lot of scans on kids that we didn’t before.”

Whether the sleep protocols have a larger impact on medical practice remains to be seen. Hazlett says clinical MRI labs lack basic features that make sleep scans successful, such as the ability to dim the lights. “When we go to the hospital and tell them we can scan a 12-month-old without sedation,” she says, “they look at us like we’re crazy.”

Correction: This article has been modified from the original. The previous version incorrectly stated that Shamay Bartlett’s 2-year-old twins participated in the Infant Brain Imaging Study.