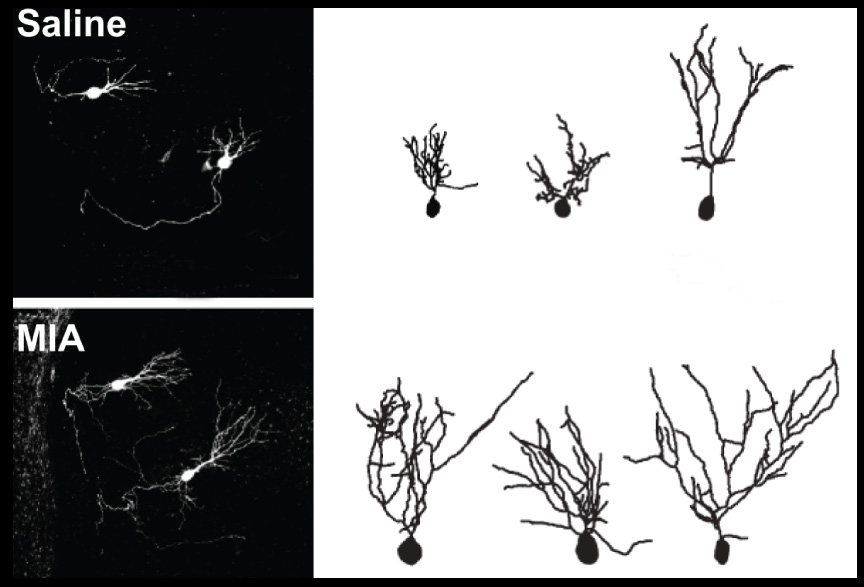 In mice exposed to maternal inflammation in the womb, a key chemical messenger never makes the switch from exciting brain signals to inhibiting them.

The mice, as a result, have overly excitable brains, a trait also seen in the brains of people with autism. Researchers presented the findings yesterday at the 2018 Society for Neuroscience annual meeting in San Diego, California.

In the womb, the chemical messenger gamma-aminobutyric acid, or GABA, excites neuronal signals. GABA temporarily switches to being an inhibitor of brain signals around the time of birth and then permanently assumes an inhibitory role again about two weeks later.

But in mice exposed to inflammation in utero, GABA remains excitatory. This same phenomenon has been reported by several teams in three other rodent models of autism: rats exposed in utero to the epilepsy drug valproate (VPA), mice that model fragile X syndrome and mice missing a chunk of chromosome 221.

“Inflammation can induce the same type of disruption as what is seen in other models,” says Amandine Fernandez, junior researcher at Neurochlore, a biotech firm based in Marseille, France, who presented the findings. The results were also published yesterday in Cerebral Cortex2.

Neurochlore is testing a blood-pressure drug called bumetanide as a treatment for autism; the drug is thought to work by switching GABA’s role from excitation to inhibition.

Fernandez and her colleagues injected pregnant mice with a mock virus to mimic infection and trigger an immune response. Maternal infection is linked to autism, and mice exposed to maternal inflammation in utero show a variety of autism-like behaviors.

The team recorded the activity of neurons in slices from the hippocampus, a brain region involved in learning and memory. GABA is excitatory in these slices both on the day of birth and at 2 weeks of age, the team found. The neurons show unusually long and sinuous branches, perhaps because GABA’s excitatory role fosters dendrite growth, Fernandez says.

Another mouse study, published in April, also reported that the brains of mice exposed to infection in utero are overly excitable. That study reported that GABA remains excitatory in the cortex, the brain’s outer layer, even when the mice are 20 days old3.

The new work found that treating brain slices from newborn pups with bumetanide switches GABA to an inhibitory role.

The team is exploring whether the drug also normalizes GABA function in older mice, and whether it eases the mice’s autism-like behaviors.