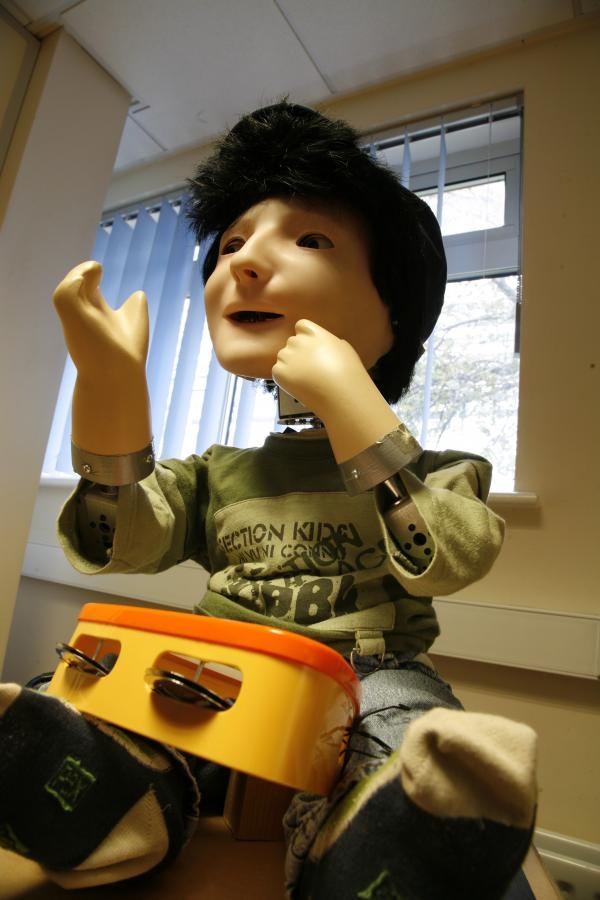 Transformers: Children with autism are captivated by robots of all shapes, colors and sizes.

In the past couple of years, dozens of children visiting the Yale Child Study Center have played with a green and wide-eyed robotic miniature brontosaurus called Pleo. These are children with autism, who normally have tremendous difficulty communicating with other people — but they eagerly interact with the robot.

Sometimes, for instance, Pleo walks on a cartoon map showing mountains and rivers. Pleo is afraid of water, and manages to stop whimpering and cross the rivers only with a bit of encouragement from the child.

Even more surprising: the children usually stay in a social mood after Pleo leaves the room.

At the International Meeting for Autism Research in May, researchers from Yale reported that 9- to 12-year-old children with high-functioning autism spend more time face-to-face with therapists after a five-minute play session with Pleo than they do before the session.

“That’s the part that gets us really excited,” says lead investigator Brian Scassellati, associate professor of computer science at Yale. “Robots can provoke these social behaviors, which gives the clinicians this window in which they can have some solid interactions with the kids.”

The first account of using a robot as an autism therapy dates back to 1976. Thanks to media attention and more accessible robotic technologies, this approach has blossomed somewhat in the past few years. There are few sources of funding for health-related uses of robotics, but about a half-dozen research groups are seriously investigating how both low- and high-tech bots can help children with autism — from improving coordination to stimulating more interactions with other people.

Parents often report that their children with autism have an affinity for mechanical toys and computer games.

These children show a wide range of responses to robots, depending on their social ability, the size of the machine and even the sounds it makes. “But there’s absolutely no question that, in all cases, we’re getting the kids to be socially interested in the robots,” notes Maja Matarić, co-director of the Robotics Research Lab at the University of Southern California.

Nao can recognize and talk to children with autism.

Bandid detects and reacts to a child's movements.

Some of the earliest experiments of robots and children with autism used a simple rolling sphere1. A few years ago, a Japanese group made headlines with the Keepon robot, a tiny yellow snowman that can soothe a rocking child with autism just by bobbing and shaking in the same rhythm2.

The children’s attraction to robots is encouraging, but also frustrating. “None of us want to be training kids to respond to robots,” Scassellati says. “That has no therapeutic value in and of itself.”

That’s why the most recent push in this growing field is to use robots as a stepping-stone for more social interactions with other people.

For instance, British researchers have had success using a humanoid robot named KASPAR, which looks like a young boy and can make simple facial expressions. Last year, in collaboration with the AuRoRA Project — which has been developing robotic therapies for children with autism for more than a decade — they reported that three children with low-functioning autism not only looked at and touched KASPAR, but encouraged their adult playmates to do the same3.

“They get physical interaction, touching, exploring, eye contact — all of these skills they didn’t have before,” says Ben Robins, senior research fellow at the Adaptive Systems Research Group at the University of Hertfordshire, U.K.

Some groups are focusing on games in which children imitate robots’ movements, because mimicking skills are known to be important for learning language and for social behaviors.

“As you live within your environment and interact with people, you learn to synchronize your behaviors with others,” notes Anjana Bhat, assistant professor of kinesiology at the University of Connecticut. In contrast, children with autism don’t attend to cues from people around them. These acrobatic games may also improve motor skills, such as coordination and balance, which are often impaired in children with autism.

Bhat and robotics expert Tim Gifford set up a game in which children with autism try to imitate the increasingly complex dance moves of i-SOBOT, a small human-like bot. Later, the child dances and the robot imitates the child.

Preliminary testing on three children has shown that they are friendlier and more talkative after the game. The researchers are planning a more rigorous trial of 40 children with autism using a humanoid robot, Nao, which can be programmed to make subtler movements, detect faces and converse with a child.

Other groups are using robots that look like people, rather than toys — a distinction that affects the behaviors of some children. For example, Matarić has found that children with autism who have good verbal skills tend to interact well with humanoids, whereas those with more severe impairments are often intimidated by them.

Matarić’s team has designed a small, advanced humanoid, named Bandit, which uses infrared sensors and cameras to track a child’s location. Bandit can adjust its movements to give the child more or less personal space, depending on how the child reacts. If a child backs away in fear, for example, Bandit says “Aww.”

These elaborate machines are unlikely to be widely used until they are mass-produced, however. KASPAR and Bandit are not for sale. Keepon costs $30,000, Nao about $15,000 and i-SOBOT $280.

Nearly all the research funding for robotics comes from the U.S. Department of Defense or the National Science Foundation, which have tiny budgets for health applications.

“Getting funding for robotics is very, very hard,” says Corinna Lathan, chief executive officer of AnthroTronix, an engineering company in Silver Spring, Maryland. In October, Lathan and Matarić began work on a U.S. Department of Education grant to use the company’s star robot, CosmoBot, to teach cognitive skills to 3- to 5-year-old children with autism.

AnthroTronix is working with British manufacturer Valiant Technologies to make CosmoBot commercially available by next year. Lathan says they’re trying to keep the price under $200, so that it’s affordable for schools and some families.

Pleo the dinosaur sells for $350 off the shelf, and Scassellati hopes to have a version specifically intended for children with autism available soon. “Virtually every parent we’ve worked with has asked to take the robot home,” he says.