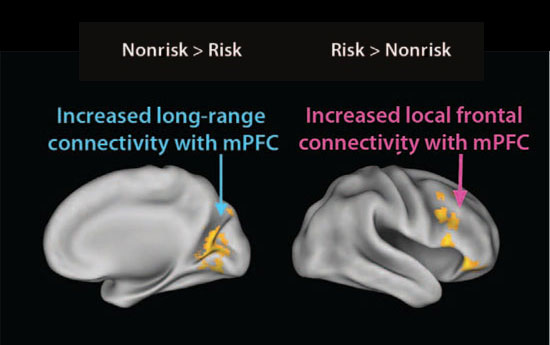 Local chatter: People who carry a variant of the autism risk gene CNTNAP2 have overly-connected frontal lobes and problems with language.

A variant of the autism risk gene CNTNAP2 may alter the brain to emphasize connections between nearby regions and diminish those between more distant ones, according to a study published 3 November in Science Translational Medicine1.

CNTNAP2 is a large gene, and the variant linked to autism is fairly common — about one-third of the population carries it. Brain imaging reveals that children who carry this risk variant — whether they have autism or are typically developing controls — show a similar pattern of faulty circuits.

Specifically, the brains of those who carry the risk variant show more connectivity between the medial pre-frontal cortex and the right frontal cortex, which are at the front of the brain and are involved in information processing and language. Connections between those regions and the more distant medial occipital and ventral temporal cortices, which carry out other language functions deeper in the brain, are much weaker.

“We know that if you carry the risk variant you are more likely to have language difficulties,” says Daniel Geschwind, professor of neurology and psychiatry at the University of California, Los Angeles. “There could be other functional correlates as well.”

Disrupted connections between brain regions have long been proposed as a primary cause of autism. The new study provides strong support for the connectivity theory, which suggests that autism stems from impaired long-range circuits and too many local connections in the brain.

Researchers first identified CNTNAP2 as an autism risk gene in 20082 3. Since then, several studies have confirmed the link.

Another 2008 study implicated this CNTNAP2 variant as a risk factor for specific language impairment, or SLI, a learning disorder characterized by frequent repetition of certain words and phrases4. Children with autism are also prone to language repetition.

The new study is the first to use brain imaging to reveal the variant’s functional effects.

“It is an exciting piece of work and a beautiful demonstration of how links between molecular and neuroimaging data can help us make sense of genetic associations in autism and related disorders,” says Simon Fisher, director of the language and genetics group at the Max Planck Institute for Psycholinguistics in The Netherlands.

In a series of experiments, the researchers used functional magnetic resonance imaging (fMRI) to scan the brains of 32 children — half of whom were diagnosed with autism — while they learned to classify geometric designs into groups.

The frontal lobe region the researchers focused on — the medial prefrontal cortex — is part of the brain’s default network, which is more active when the brain is at rest. Anomalies in the default network are thought to be important in autism.

Even when they are not focused on the learning challenge, children with the risk variant of CNTNAP2 consistently show a great deal of activity in this region.

But when the researchers traced the connections between the frontal lobe and more distant parts of the brain in these children, they found very weak connections.

To confirm that these effects are not specific to autism, the researchers turned to another group of 39 children. None of these children have autism, but 29 carry the CNTNAP2 risk variant. Scanning the children while they focused on another learning task, the researchers found that the brain connectivity pattern is “amazingly similar,” to that of children with autism, says Ashley Scott-Van Zeeland, a Dickinson Research Fellow at the Scripps Translational Science Institute.

Although the CNTNAP2 alelle that creates these effects is common, not everyone who carries the variant is visibly affected.

The 29 children who carry the risk variant have normal IQs and no apparent language difficulties, for example. However, “we were looking at 12-year-olds,” Scott-Van Zeeland points out. “We don’t know what their language development looked like when they were younger.”

Like other risk genes for autism, CNTNAP2 does not by itself create the disorder, she adds. Instead, common variants in risk genes might act in combination with other genetic and non-genetic risk factors to increase susceptibility to autism and other disorders.

“It’s a combination of a number of genes or biological pathways coming together to create these complex disorders,” she says.