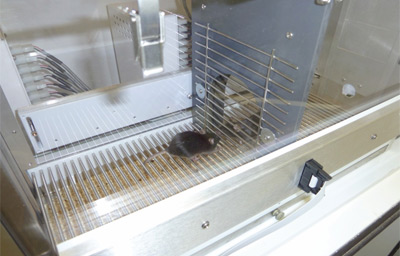 Social call: BTBR mice press a lever fewer times than controls do, regardless of whether their reward is social.

The BTBR mouse model, an asocial strain often used to study autism, may not be optimal for autism research, suggests an unpublished study presented today at the 2013 International Meeting for Autism Research in San Sebastián, Spain.

Compared with B6 mice, an inbred, social mouse strain, BTBR mice press a lever fewer times to receive rewards, regardless of whether the reward is food or a social visit from another mouse.

The data suggest that BTBR mice are less motivated in general, not just socially, and that their behavior may not represent autism-like traits, says lead investigator Loren Martin, associate professor of psychology at Azusa Pacific University in California.

“We should be cautious about which models we consider to be relevant to autism,” Martin says.

Many researchers measure social motivation by observing whether mice prefer the company of other mice or objects. The new research quantitates this assessment.

In one experiment, mice earn a 15-second visit from another mouse when they press a lever. The researchers increased the number of lever presses needed for the reward, looking for the tipping point at which the mice would stop trying.

During a ten-day testing period, the nine control B6 mice pressed the lever an average of 20 times in order to earn the visit, compared with an average of 8 times for the BTBR mice.

However, in a second experiment, BTBR mice showed that they also have less motivation for food than controls do. When given a choice between a social visit and food, both strains favored the food reward. However, the BTBR mice pressed the food lever 35 times in an hour compared with the control mice’s 65 presses an hour.

The BTBR mice are obese, and it’s possible this played a role in their diminished desire for food, Martin says.

Martin and his colleagues plan to test the role of serotonin and oxytocin on social behavior in mice.