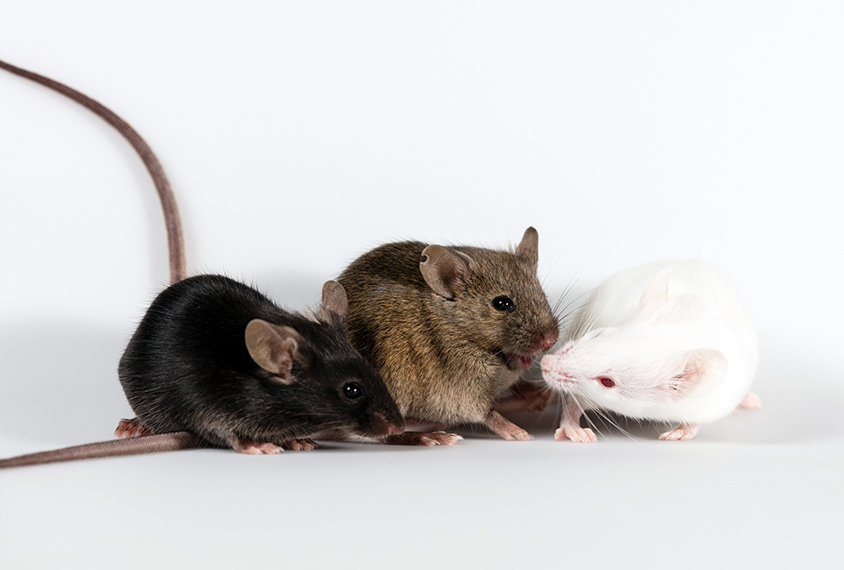 Increased interest: SCN2A-deficient mice socialize more like control mice after a mutation in the gene is fixed.

Treatments that counteract the effects of a mutation in a top autism-linked gene in mice increase the animals’ sociability in adulthood, according to a new unpublished study.

Researchers presented the findings virtually at the 2021 Society for Neuroscience annual meeting.

The results are based on mice deficient in SCN2A, a gene that codes for an ion channel protein that ferries electrical signals across the brain. Mutations in the gene are strongly linked to autism and often cause epilepsy.

Mice missing both copies of SCN2A typically don’t survive long after birth, whereas those that lack only one copy show few behavioral differences from control mice, according to previous work.

So to create a useful model for the new study, researchers used a ‘gene trap,’ a snippet of DNA that alters gene expression. Mice engineered with the gene trap express about 25 percent of typical SCN2A levels. The trap also made it possible for the researchers to later reinstate typical expression levels of the gene in adult mice and alter their behavior.

Unlike control mice with two working copies of the gene, the SCN2A model mice preferred to spend time in an empty chamber instead of with another mouse, suggesting reduced social interest.

When the researchers injected a transgene into the animals’ tails to block the gene trap, though, the SCN2A mice and control mice socialized in a similar way.

To isolate the part of the brain responsible, the researchers next injected the transgene only into the striatum, which had no effect. But the animals’ social behavior improved again when the team delivered the transgene to areas connecting the striatum with the hippocampus, thalamus and prefrontal cortex.

The animals’ social behavior also increased when they were treated with the anti-anxiety drug clonazepam or another compound that inhibits the excitatory neurons connecting the medial prefrontal cortex and the striatum.

The findings demonstrate that “treatments can work in adults,” says Muriel Eaton, a graduate student in Yang Yang’s lab at Purdue University in West Lafayette, Indiana, who presented the work.

In a second study, Eaton and her colleagues show that the mice also have impaired learning and memory, and that neurons in their hippocampus have unusually few branches to other neurons. Further analyses suggested that this issue seems to originate from differences in the animals’ microglia — non-neuronal brain cells that help protect neurons from damage and sculpt neuronal links.

A drug compound also altered electrical activity in brain slices from mice missing one copy of SCN2A, according to another study presented at the conference, in which a different team of researchers scanned more than 77,000 known compounds to identify those that might target the ion channel encoded by SCN2A.

Eaton says she and her colleagues are working to adapt a virus-based gene therapy to deliver a functional copy of SCN2A into the mice — a strategy that is being developed for other conditions, such as fragile X and Rett syndromes.

“You can’t go straight to clinical trials with it,” Eaton says, “but it’s another step.”