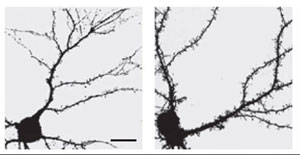 Fuzzy fingers: Silencing a gene called CDKL5 results in too many small spines on the finger-like projections (right) of neurons compared with controls (left).

Fuzzy fingers: Silencing a gene called CDKL5 results in too many small spines on the finger-like projections (right) of neurons compared with controls (left).

A gene linked to some types of Rett syndrome is needed for the stability of synapses, the connections between neurons, according to research published 4 September in Nature Cell Biology1.

The findings, from an exhaustive collection of experiments in mice, cultured neurons and human stem cells, add cyclin-dependent kinase-like 5 (CDKL5) to a growing list of synaptic genes linked to autism.

“Overall, the findings fit very well with the notion that impaired synaptic function plays a very important role in autism,” says Li-Huei Tsai, director of the Picower Institute for Learning and Memory at the Massachusetts Institute of Technology, who was not involved in the study. “They provide convincing evidence that CDKL5 is a compelling risk gene for autism.”

The researchers show that the CDKL5 protein chemically modifies other proteins at the synapse, regulating how they bind.

Vera Kalscheuer and her collaborators first pinpointed CDKL5’s role in neurodevelopmental disorders in 2003, when they identified a translocation — a flipped segment of DNA — in two girls with symptoms similar to those of Rett syndrome2. (Most cases of Rett are linked to mutations in MeCP2, but atypical forms of the disorder can be caused by mutations in other genes.)

A follow-up study in 2004 of other girls with similar symptoms revealed two additional mutations in CDKL53. The protein had been found to interact with MeCP24, but little was known about its other functions.

In the new study, Kalscheuer and her collaborators showed that CDKL5 is found almost exclusively in excitatory synapses — those that trigger other neurons to fire. It’s located in the same parts of the neuron as PSD-95, a post-synaptic protein that plays a vital role in the scaffolding of the synapse.

Silencing the gene in cultured neurons as well as neurons in the cortex of embryonic mice triggers the formation of unusual dendritic spines, small protrusions on neuronal branches where synapses form. The neurons have more spines than control cells do, but they are thinner and have an unusual shape. They also form fewer synapses and are less electrically active than their normal counterparts.

The researchers speculate that this abnormal activity might underlie some of the neurodevelopmental symptoms seen in people with CDKL5 mutations.

CDKL5 also appears to add a chemical group to a protein called NGL-1. This step, dubbed phosphorylation, enables NGL-1 to bind to PSD-95, which is critical for maintaining the synapse.

“To me, what was really interesting was that they were able to home in on this phosphorylation site that seemed to be responsible for a lot of the [effects],” says Bernardo Sabatini, professor of neurobiology at Harvard Medical School, who was not involved in the research.

Further implicating the role of these proteins in autism, NGL-1 also binds to netrin-G1 or NTNG-1, which has been linked to both atypical Rett syndrome5 and autism6.

“The findings point to an interesting new signaling pathway in autism,” says Kalscheuer, who leads the Chromosome Rearrangements and Disease Group at the Max Planck Institute for Molecular Genetics in Germany.

To confirm that the findings are relevant in people, the researchers created induced pluripotent stem (iPS) cells  — stem cells derived from adult tissue — from people with mutations in CDKL5. These cells, too, form fewer synapses and have abnormal dendritic spines.